Gowanda Mural Project: Brightening and connecting the community through art

The project started with a grassroots effort to clean up the village and cover graffiti under a bridge — but then it turned into something much greater. 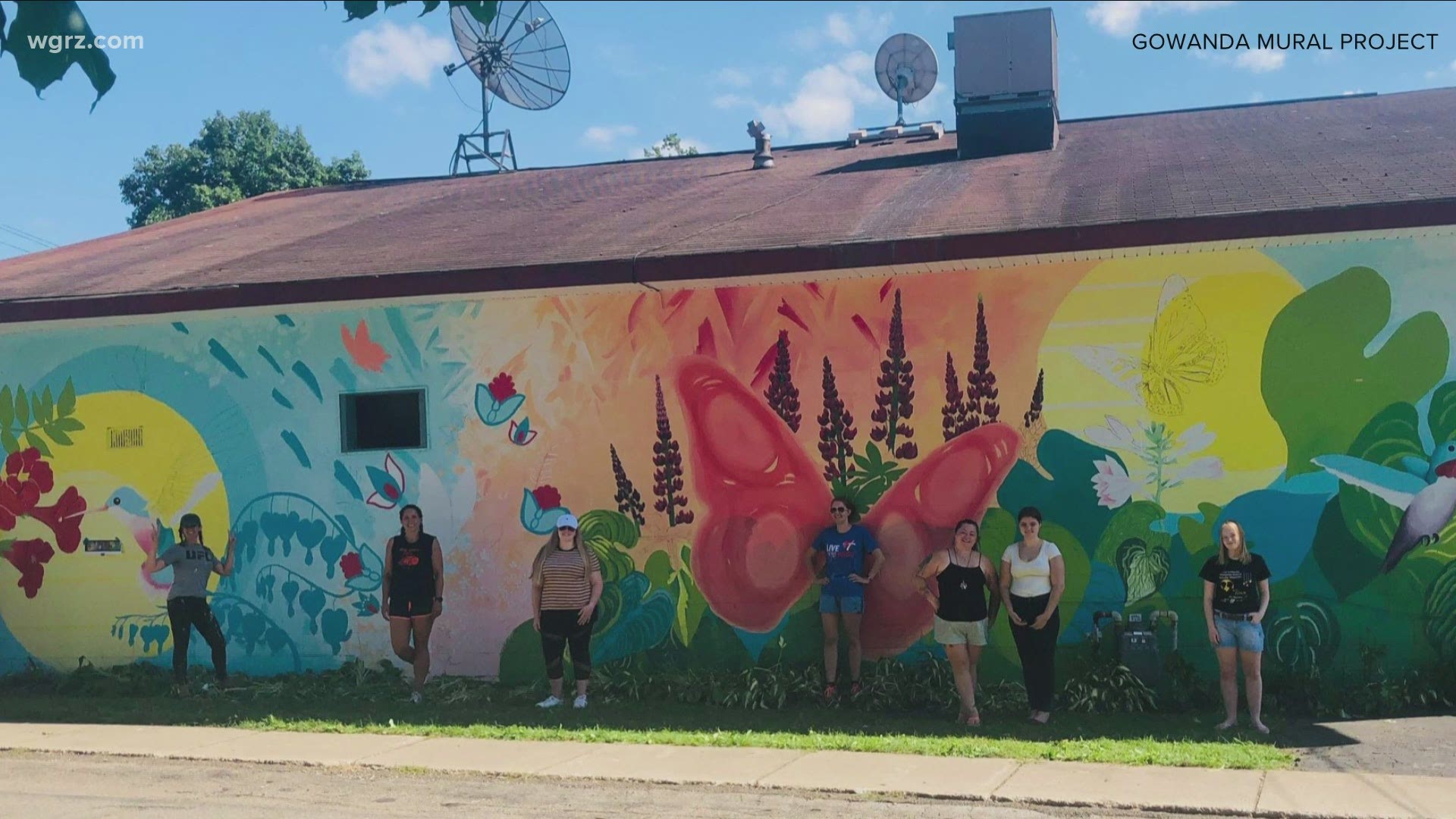 GOWANDA, N.Y. — Brick walls that were once bare have become huge canvases for a group in Gowanda looking to improve their community one mural at a time.

The Gowanda Mural Project started with a grassroots effort to clean up the village — there was graffiti and trash under a bridge and buildings needed a fresh coat of paint.

Amelia Jarzynski, co-owner of Jesse's Home and Gifts on Main Street, felt that improvements would benefit other business owners too. She also knew that when you want things done, sometimes you just have to take charge and do it yourself.

"There's a lot of attitude that's like, this would be really nice if this was done, and people make the suggestion on social media...but it's not my job attitude. Sometimes you just have to do things to help out your community that aren't your job. That started the ball rolling into a pretty big group. That's just blossomed into the mural project," Jarzynski said.

She and others painted a giant steelhead to cover up the bridge graffiti. She admits it needed some tweaking, so she put out a call on Facebook to find area artists that could help put the finishing touches on the fish.

Through the power of social media, Jarzynski connected with Gowanda High School art teacher Heather Rydzik and fellow artist and Gowanda native Krissy Smith. They all share a desire to spruce up the area and showcase the work of local artists.

They did some more work on the steelhead mural (they plan to add the Seneca word for steelhead below the mural this spring). Then work began on the first, fully-completed mural — a giant flower mural on the side of a salon in the village titled "Whimsy on North Water."

"The trust the community put in us, especially the building owners, was humbling. Also inspiring was people's belief that we could do this," Rydzik said. "Once we did one, it was like, oh! We are muralists it turns out."

The owner of McCormack's hardware store donated the paint, and various people in the community would stop by the work sites to donate money for supplies.

Next up was the mural on the side of Palm Gardens motel and bar. For this, the ladies wanted to involve more of the community, so they held community paint days. Various people from Gowanda worked on the base coat and larger parts of the mural, and some of Rydzik's former students came to help with the finer details.

The mural on Palm Gardens was finished in August 2020 and is called "Garden in the Valley." It's brightly colored and features native birds and plants and a nod to Native American beadwork.

"It's not just about the visual either. It's about the feeling I think that it creates. The art itself is beautiful, but it's the actual feeling when you come into a town and you feel like you belong to something," Smith said.

There's also a kayaker mural under the bridge, opposite of the steelhead mural. They plan to add to the kayak mural later this year.

Children in Gowanda also got involved. They worked on a smaller mural project where they painted on concrete barriers behind a local business.

The Gowanda Mural Project is also looking for ideas from the community. They say their next murals will be literary-inspired, and they hope to partner with community libraries and school libraries to figure out where the art will be showcased.

1 / 11
WGRZ/Tommy Gallagher
This art can be found on the side of the Fox Financial building along Union Street in Olean, facing Wayne Street.