One group thinks rules regarding quarantine, should there be a rare occurrence of COVID among school population, could be relaxed if everyone must wear masks. 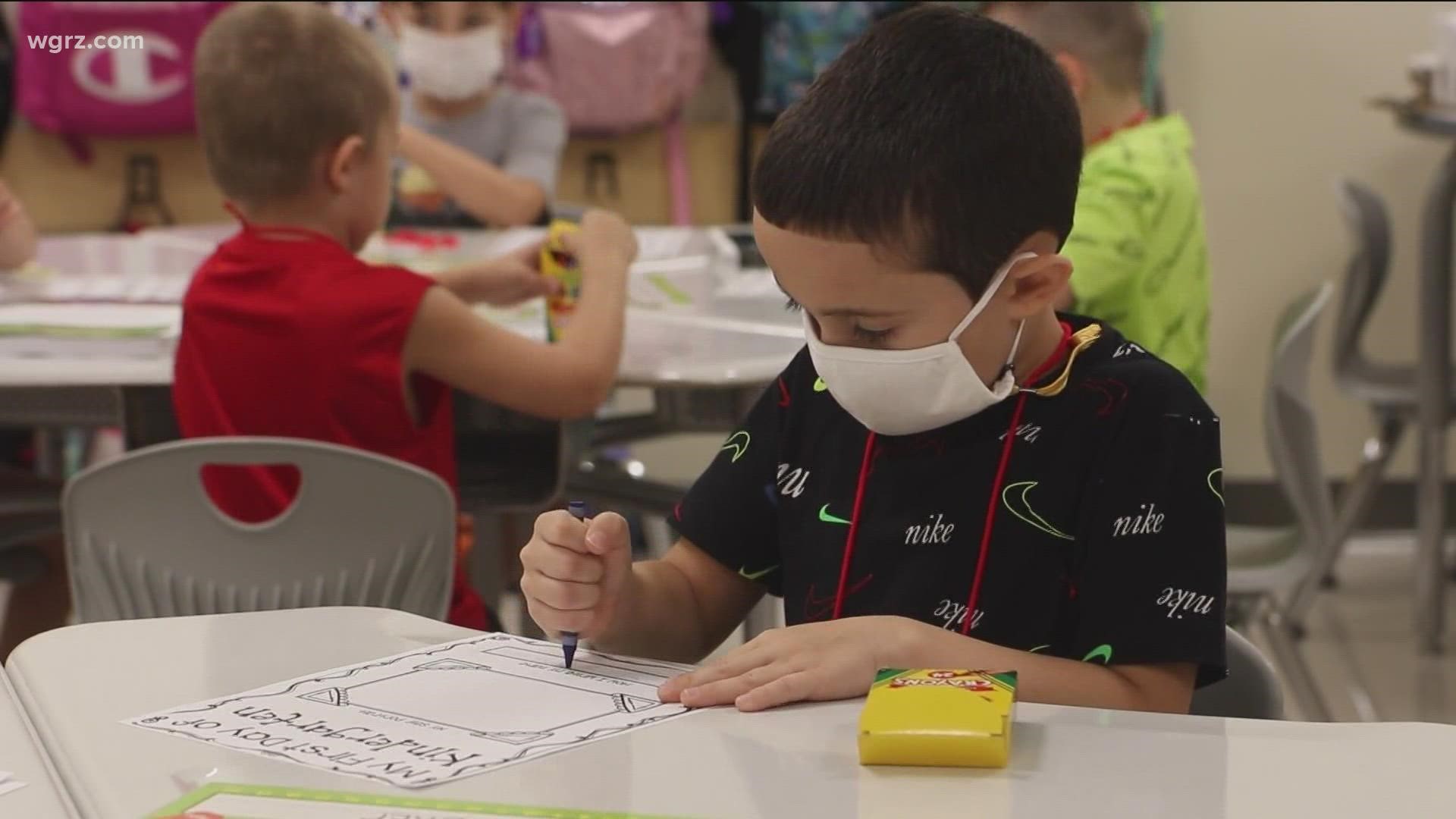 BUFFALO, N.Y. — A Buffalo area parents group is hoping Erie County will re-visit and perhaps modify at least one aspect of its new rules for schools this year, which were announced earlier this week.

Though encouraged that county health officials and education leaders seem committed to having in person learning five days a week this year, they are particularly concerned over rules regarding situations where quarantines might be imposed.

Quarantine guidance was included in a myriad of mandates that will be in place for the start of the school year, but which the County Executive noted would likely be relaxed when COVID-19 case numbers decline.

The guidance says that in the event that someone in a classroom or who rides a bus tests positive for COVID, then any unvaccinated student (which would currently include all students under 12 years of age) who was "within 3 feet or unvaccinated teachers/staff within 6 feet from the positive COVID-19 case for a cumulative total of 15 minutes or more over a 24-hour period during a time the case was infectious, regardless if masks were worn, will be considered a close contact and quarantined for 10 days from the last day of exposure to the positive COVID-19 case."

Further, the guidance establishes that; "if there are two or more cases in a classroom during a 10-day period, all unvaccinated individuals in the class will quarantine for 10 days from their last exposure to the positive COVID-19 case, regardless if masks were worn."

"We need to look at this and look to what other counties and states are doing," Parssinen said. "This goes beyond the guidance of the CDC. Even the California Department of Health has a modified quarantine policy whereby if all the children are masked, then no one actually needs to stay home as long as they test (negative) two times over the 10 days, and the schools provide the tests, and they continue to be masked."

Parssinen noted that many school districts are not offering online learning options this year, which means students would be sent home with packets of work but with no direct instruction.

"Missing 10 days here and 10 days there all adds up when the goal is for kids to be in class for the whole school year," she said.

Parssinen also raises the question of why, if everyone is required to be masked because it supposedly offers protection, that supposition is then disregarded under the under the rules as written.

"There has to be some benefit to masking, which is not going home and not being quarantined," Parssinen said.

"And if there is not that benefit to masking, what are we doing masking?" she asked, while noting the mounting evidence that for the youngest of students, prolonged mask wearing can impact the child's literacy, speech, social  and emotional development, and how they connect with teachers.

A spokesperson for Erie County Health Commissioner Dr. Gale Burstein told 2 On Your Side that Dr. Burstein was not available for an interview on Wednesday.

"I think if everyone got together and continued talking, and we know there is collaboration now between the superintendents and the county, I would like to see the two-person rule go away and have these rules at least be in line with the CDC," Parssinen said.

When the rules were announced on Monday, Erie County Executive Mark Poloncarz reminded parents who disagreed with them that they "always have the option of homeschooling their children."

Poloncarz also referred to those raising objections as a "vocal minority."

"It's always disheartening to hear Mr. Poloncarz say things like that," Parssinen said. "He said the same thing last year during the open schools movement, when we knew science at that point and knew that schools were safe, and when we were proven right in that kids could have been in school this entire time and learned safely. Whether we're a minority or not, we're a group of thousands of parents whose voices deserve to be heard."