Rasmus Dahlin has gone through his first full practice with the Sabres. 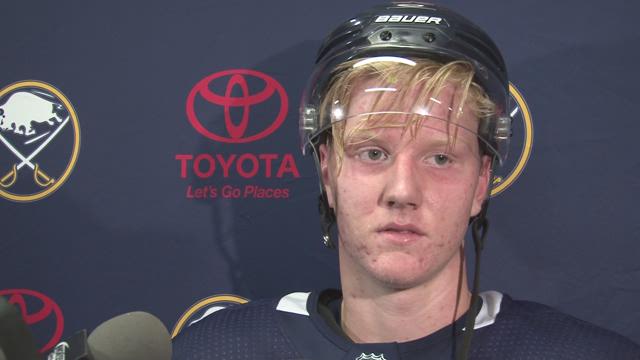 BUFFALO, NY- After last season, Buffalo Sabres Head Coach Phil Housley promised that training camp would be much tougher than last year. On day one, it's evident that Housley is keeping that promise.

Defenseman Jake McCabe said the session was "High tempo, high pace guys were going up and down the ice competing and that's all you can ask for especially on day one."

All the players are excited about what first overall draft choice Rasmus Dahlin brings to the team. While everyone else knows he's making this team, Dahlin isn't taking on chances. "I will do everything I can to make the team. If I make it I'll just play the best I can."

MORE: One on One with Rasmus Dahlin

He was paired with veteran Jake McCabe on the first day of practice. "I was excited to be paired with him. The guy's an incredible talent as we all know by this point." Dahlin said "He talked a lot and he's going to teach me a lot," he said about playing with McCabe.

While the Sabres have a much different looking roster, McCabe and another veteran defenseman, Zach Bogosian are both healthy, which hasn't been the case for quite some time. Bogosian said Thursday, "I'm good to go." McCabe is back after having shoulder and thumb issues that ended his season early last year.

The Sabres are back on the ice Saturday and scrimmage Sunday. They open the preseason in Columbus Monday night.