There's been a contentious back-and-forth Monday over the football games between Mckinley and Kenmore West High School that were supposed to be played last week. 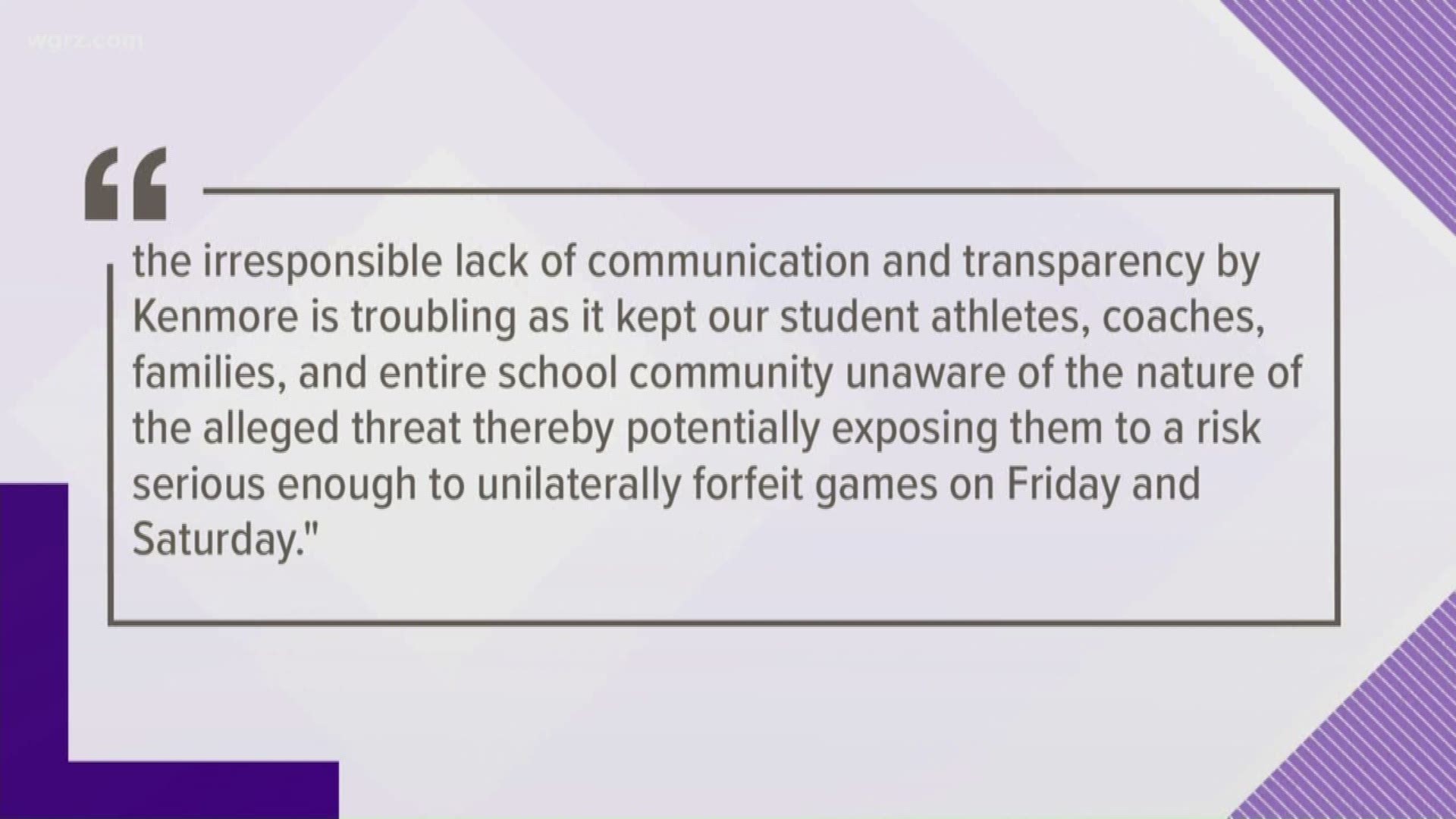 There's been a contentious back-and-forth Monday over the football games between Mckinley and Kenmore West High School that were supposed to be played last Friday and Saturday.

On Friday, the Ken-Ton School District announced the games were postponed because of social media threats.

On Monday, officials from the Buffalo Public School District said they weren't consulted, and that Ken-Ton didn't share any of the posts with them. They say they plan to make sure Section VI athletic officials enforce a forfeit.

BPS blamed an "irresponsible lack of communication" over the nature of the threats.

Ken-Ton schools, though, say they made the decision in conjunction with Buffalo's acting athletics director and Section VI. The Ken-Ton District says they tried to talk with Buffalo school officials and and that they've been communicating with the Buffalo Police Department.

Ken-Ton says the idea that they unilaterally forfeited the game is false and they're trying to reschedule it.

Here are both school districts statements:

On Friday, September 13, officials from Kenmore Tonawanda School District informed Section VI (and Section VI concurred) that it was unilaterally forfeiting scheduled Varsity and Junior Varsity football contests between McKinley High School and Kenmore West High School based on an alleged social media threat, the details of which were not, and have not, been shared with the Buffalo City School District.

We care about all students and families and will always be proactive in working with our education partners. However, the irresponsible lack of communication and transparency by Kenmore is troubling as it kept our student athletes, coaches, families, and entire school community unaware of the nature of the alleged threat thereby potentially exposing them to a risk serious enough to unilaterally forfeit games on Friday and Saturday.

The District intends to pursue this matter to the fullest extent possible in accordance with the Section VI “Proposed Cancellation Policy of Varsity Football Games” to ensure that the forfeit by Kenmore West is enforced.  It is critical that the proper procedures provided by Section VI and the mutual agreement of the parties in regard to cancellations be followed by all participating districts and that accountability be attributed to its proper place when these procedures are not followed.

KEN-TON STATEMENT:
On Friday afternoon, Kenmore West High School and Ken-Ton School District administrators were made aware of several online reports regarding the potential for violence at the Kenmore West High School/McKinley High School varsity football game scheduled for later that day. These reports are being investigated by the Town of Tonawanda Police Department in conjunction with school/district administrators and caused widespread alarm among many Ken-Ton School District parents.

At approximately 3:00 p.m. on Friday, Ken-Ton School District Athletics Director Brett Banker and Buffalo Public Schools Acting Athletics Director Ryan Shepard discussed the reports and agreed that the scheduled varsity and JV games should be postponed and rescheduled due to the seriousness of the threats and the little time left to investigate the reports. Section VI Football Chairperson Ken Stoldt was informed of the mutual decision to postpone the game. At no time did Mr. Shepard indicate that he was not authorized to make that decision. A decision to postpone a game would typically be made by a school district’s athletics director.

Earlier today, Section VI asked the BPS Athletics Department to reschedule the games. It is the hope of the Kenmore-Town of Tonawanda UFSD that these games be rescheduled soon so as not to impact other school districts in Western New York.

BPS has asserted that a decision was made to “unilaterally forfeit” the games. This is false. The decision was made by both the BPS Acting Athletic Director, the Ken-Ton School District Athletics Director, and the Section VI Football Chairperson to postpone and reschedule the games. No school district has the ability to postpone a game independently; it requires consultation with both schools and the league. Neither the Ken-Ton School District nor Section VI were ever informed that the BPS Athletics Director lacked the authority to postpone a game, which is a decision typically made by a school district's Athletics Director.

RELATED: Vandals cause damage at Crosby Field in Kenmore