State and local officials had called on the DEC to investigate after residents reported heavy black smoke in the air on September 9. 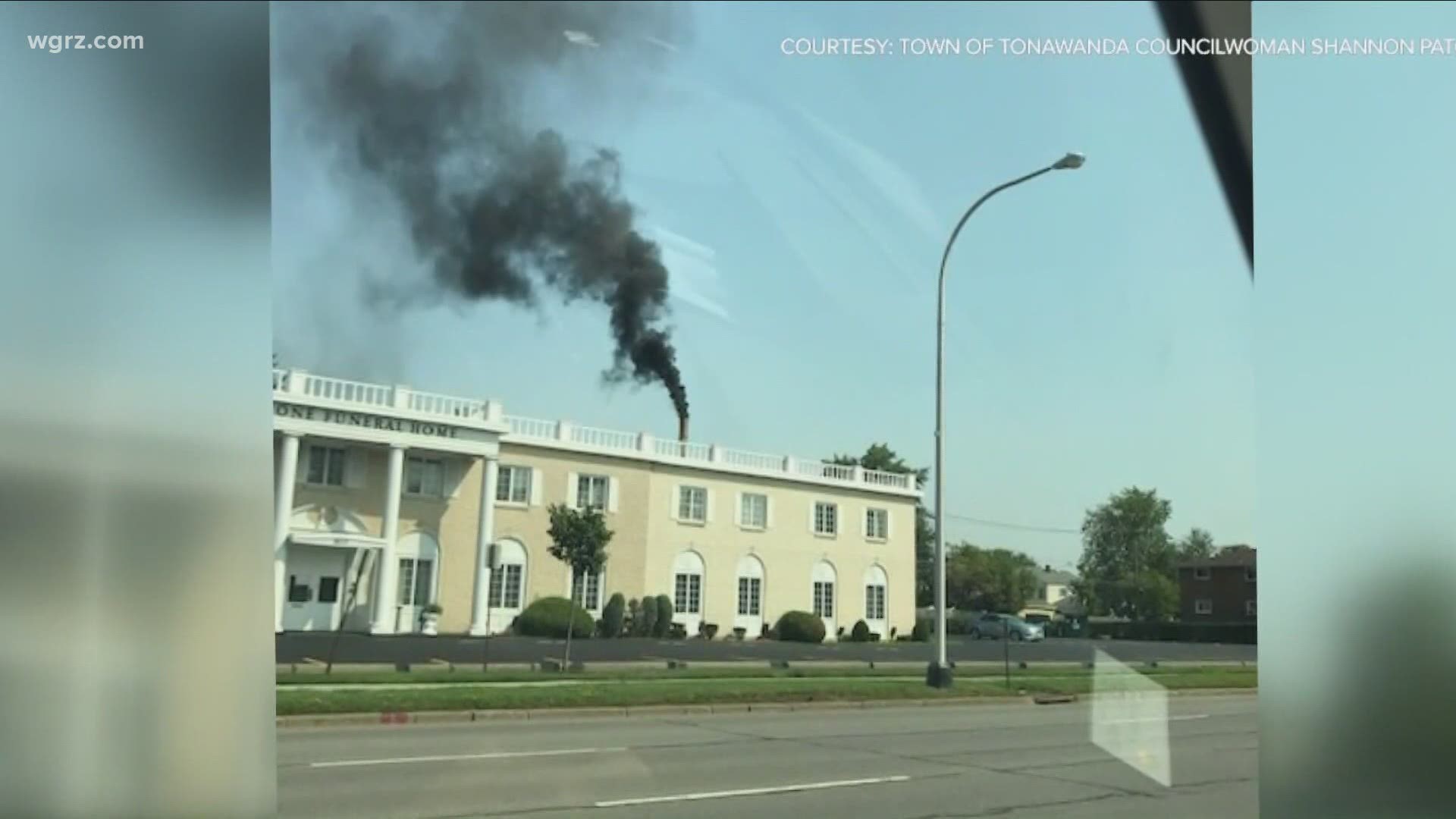 TOWN OF TONAWANDA, N.Y. — The New York State Department of Environmental Conservation (NYSDEC) has served a notice of violation to the Sheridan Park Crematory at the Amigone Funeral home on Sheridan Drive.

This comes after a photo showing thick billowing smoke coming from the facility was taken by Town of Tonawanda council member Shannon Patch on September 9.

"I thought for sure I'd be pulling over to call 911 because someone's house or business was on fire and as I came up the road I realized that it was coming from Sheridan Park Crematory at Amigone funeral home" she said.

Tuesday, the NYSDEC confirmed the crematory is in violation of two provisions of its air quality permit and that cremations will be suspended until the investigation is complete.

In 2018, the Amigone crematorium in Tonawanda promised a new pollution control system would solve ongoing problems.

Last week we saw the system fail with black smoke rising. Joined Tonawanda officials and residents to urge the facility be shut down while the DEC investigates. pic.twitter.com/NCa94dvBWc

On Sunday, Assemblyman Sean Ryan and Town of Tonawanda council member Bill Conrad advocated for cremations to be suspended during the investigation.

"I was pleasantly surprised to hear this morning that they took such quick action" Conrad said.

"I think it should be a wake up call to the company to say alright we're going to move out of this area, to a less densely packed area than this neighborhood in Tonawanda" Ryan said.

The NYSDEC issued the following statement:

"The New York State Department of Environmental Conservation (DEC) served a Notice of Violation (NOV) Monday to the Sheridan Park Crematory at the Amigone Tonawanda Chapel at 2600 Sheridan Drive in the Town of Tonawanda for violations of two provisions of its air quality permit due to the noxious release of thick black smoke into the environment and surrounding community. On Sept. 9, DEC immediately responded to public reports of the black smoke emanating from the Sheridan Park Crematory smokestack and began an investigation, which is ongoing.

"Sheridan Park is not performing cremations at this time and should not resume cremations pending DEC’s review of Sheridan Park’s internal report on last Wednesday’s incident as well as the full and complete demonstration that Sheridan Park is employing DEC-required and -approved corrective measures. DEC will continue to require full compliance under all state air quality requirements to ensure the public’s health and the environment are fully protected. Additional information will be provided when it is available."

“I am very pleased to see the DEC has acted quickly and decisively after the disturbing plume of black smoke that was released from the Sheridan Park Crematorium at Amigone’s Sheridan Drive Facility,” Ryan said. “The decision reached to pause cremations is the right decision to ensure the safety of the neighbors of the facility is put first. I have full faith that the DEC, with the cooperation of Sheridan Park, will identify the issues that caused this event to occur and take the steps necessary to keep our community safe.”

“This is an issue of fairness,” Patch said. “It is not fair to the great businesses in Tonawanda that do follow the rules, it’s not fair to our town, and most of all, it is not fair to these residents who can’t use their backyards or have family over because they don’t know when they might be dealing with smoke and odors from Amigone. The DEC agrees with us - a plume of mysterious black smoke is not okay in our community, and I appreciate their quick action.”

The crematory on Sheridan Drive shut down in 2012 after years of complaints from neighbors. In 2014, the county blocked it from reopening. And in 2016, a judge said it could reopen, and the company worked with the state to meet new emission standards.

2 On Your Side reached out to Sheridan Park Crematory for their response to the violations, we are waiting to hear back.