Could 2021 be the year recreational marijuana for adults is legalized in New York State?

Once again there is a proposal to legalize recreational marijuana in the New York State budget. A Western New York lawmaker is one of the leading voices on the issue 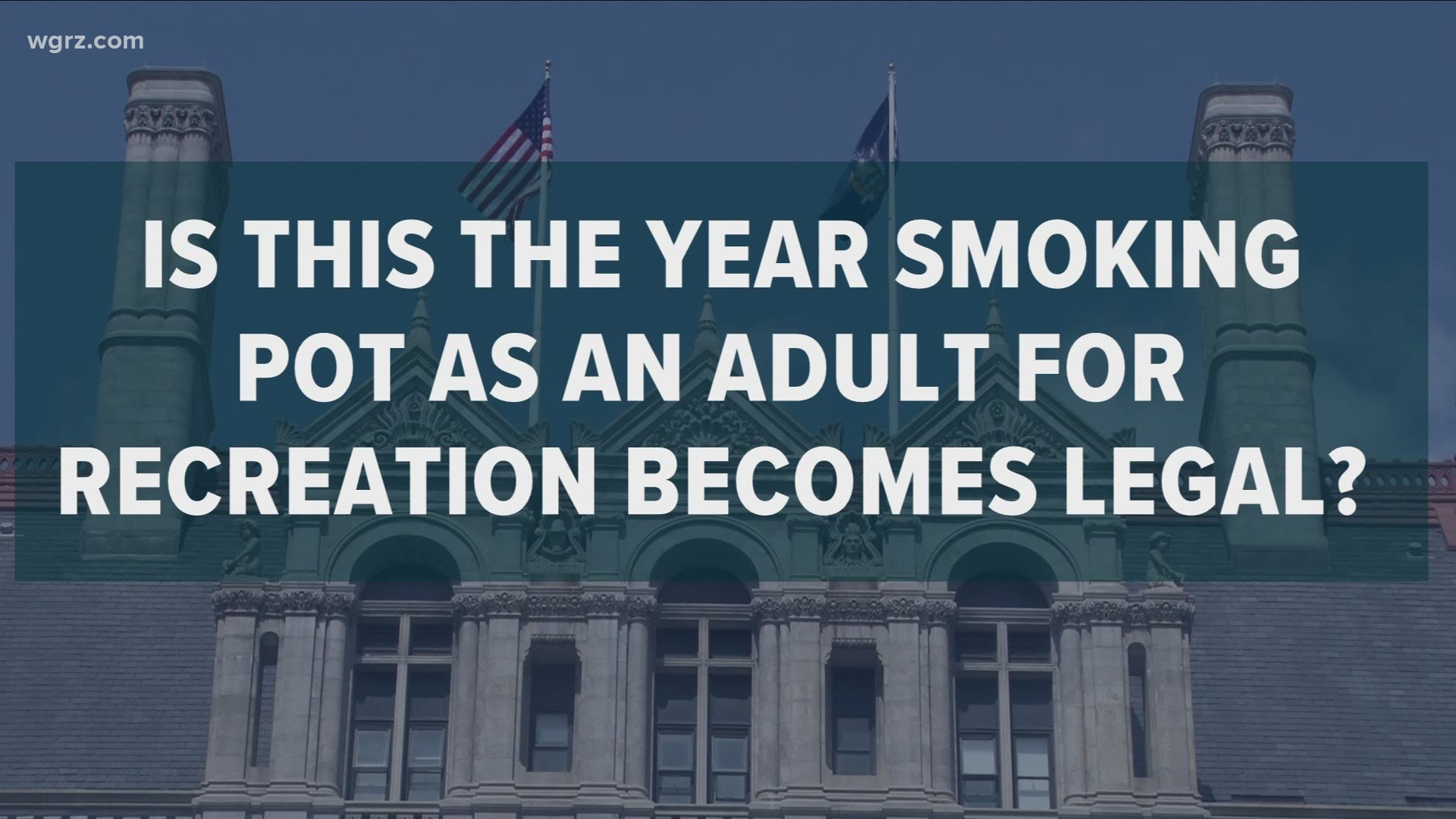 BUFFALO, N.Y. — "We're ready. Let's negotiate this, let's get this done." The words of New York State Assembly Majority Leader Crystal Peoples-Stokes of Buffalo when asked if this is the year cannabis for adult use will be approved by the state.

There are few reasons why this is gearing up to be the year New York approves legalizing weed for an adult's recreational use. One reason is the state's huge deficit. The Cuomo administration estimates it would generate $350 million in revenue, but it would not be immediate.

Aleece Burgio co-chairs the New York State Bar Association’s Cannabis Committee. She said she wishes it wasn't a money game, "but it is a money game at this point."

Another reason is that many surrounding states and Canada have legalized recreational pot for adults.

There are two bills at play. State Legislators have a bill called the Marijuana Regulation Taxation Act or MRTA. It is a stand alone bill, meaning lawmakers vote yes or no.

The governor's proposal is the Cannabis Regulation Taxation Act or CRTA. It is tied into his budget. While both bills call for legalizing adult use of marijuana, one of the biggest differences is the tax structure.

Taxation is a big issue. Burgio says, "You can't really do that if people are still opted out because it is too expensive. They are going to go to the person down the street even though public health would dictate it's not a great choice. Money is a big issue, so taxation is a huge thing that needs to be negotiated"

The governor's bill also has a criminalization aspect, which many are opposed to. Jawanza James Williams, director of organizing of VOCAL-NY said, "Currently it is a misdemeanor to sell a small amount of marijuana to a 20-year-old college student, but under Governor Cuomo's bill that would become a class D felony."

State Senator Jeremy Cooney recently said, "This is a governor who has talked about marijuana injustice, but has actually preserved criminality for several offenses related to marijuana."

Peoples-Stokes is the sponsor of the bill in the Assembly. Senator Liz Krueger, D-Manhattan is the lead sponsor of legislation in the New York State Senate.

Equity is a big issue for Peoples-Stokes.

"How do you invest in the lives of these people who have literally been shut out of opportunities in society as a result of being incarcerated for a product that you now like to have legal and allow people to make money from it," Peoples-Stokes said.

There is a community reinvestment fund in the governor's bill. The Majority Leader thinks there should be a steady stream of resources to try and fix a problem that took decades to create problems with prohibition as a result, she said it will take decades to correct.

"I think it does need to be in statute. He is a good governor, but he is not going to be governor for life," Peoples-Stokes said.

She would like to see a dedicated fund from revenues raised through drug sales to set up programs like job training, and helping people transition from prison back into society.

If recreational marijuana is legalized, Western New York and Buffalo could benefit, according to Burgio.

She added, "Rural farmland is just begging to be built on and there is a lot of access to energy. A lot of people out of NYC are reaching out to upstate to talk."

Negotiations will happen on the final bill. Peoples-Stokes is confident it will pass, "I do see it finally being approved. The legislation is valuable on its own as a stand alone policy, but if that's what it takes to get it done, the budget process, let's go. I would like to see it happen, this year 2021."

Burgio also thinks we will see approval in April.

"In the next 12 to 18 months there should be adult use marijuana where you can go and buy up to an ounce, depending on what the regulations turn out to be, but you'll be able to buy gummies, flower, tincture anything like that," Burgio said.