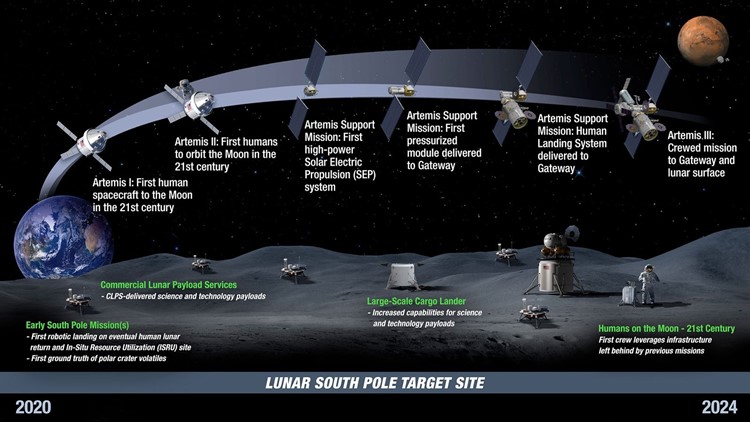 BUFFALO, N.Y. — The National Aeronautics and Space Administration, commonly known as NASA, announced Thursday that the Orion spacecraft returned to the Kennedy Space Center in Florida after spending months of rigorous testing at a facility in Ohio. With the spacecraft back at it’s launch site of Cape Canaveral, the next step is to prepare the spacecraft for launch.

Orion is the official spacecraft of the Artemis program that will send astronauts back to the Moon and, eventually, Mars. Phase one of this program, known as Artemis I, will first send an unmanned Orion into space to orbit the moon.Traveling over a million miles, the Orion spacecraft will be taken to orbit the moon and back by the most powerful rocket made for human space exploration: the Space Launch System.

Late last month, NASA Associate Administrator Steve Jurczyk stated at a lunar conference in Maryland that the Artemis I unmanned mission to the moon would likely launch sometime in the summer or fall of 2021.

If that isn't cool enough, both the development of the Orion spacecraft and Space Launch System (SLS) have local ties to Western New York. Ten companies in total, one located in Falconer and the rest in the greater Buffalo area, are working with NASA’s Artemis program on either the Orion spacecraft or SLS rocket. Nicknamed “Artemis Partners,” companies from across the country are helping NASA develop the technology to create a sustainable presence on the moon.

READ: Map of Partners for Artemis I

This past January, it was announced who could be flying in these new Artemis missions. 11 American astronauts completed two years of training and were added to the corps of astronauts eligible for future missions. None have local ties this time, but new astronaut Jasmin Moghbeli is from New York state.

The announcement of the Orion spacecraft returning home after successfully undergoing extreme testing is more or less a green light for the rest of the Artemis program. In the short term, the goal is to send the first woman and next man to the Moon by 2024, with the end goal of sending humans to Mars.