Several local universities are moving classes online to prevent the spread of the novel coronavirus. 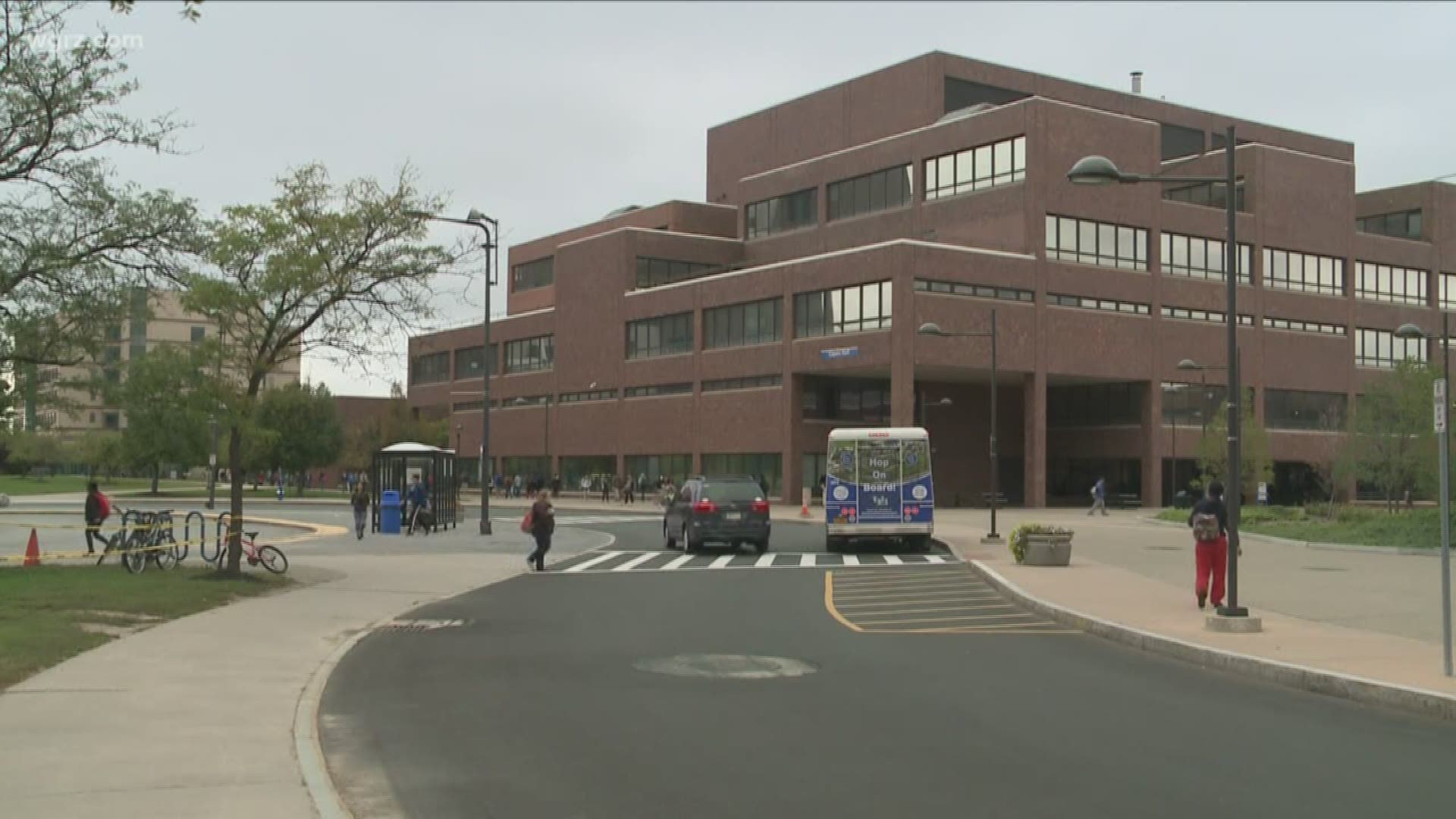 BUFFALO, N.Y. — Colleges and universities across the country are changing the way classes are being held in result of the spread of COVID-19, also known as the novel coronavirus.

Gov. Andrew Cuomo announced on Wednesday that SUNY and CUNY schools will be moving to "distance learning models" for the remainder of the semester. This move is an effort to reduce density in classroom settings in an effort to keep everyone healthy.

New York State is developing plans for the distance learning models, whether it's breaking up classes into smaller units or transitioning classes online. Students would be able return home and continue their education online or through other means.

However, campuses will not close, and dorms and labs will remain open. This will go into effect on March 19.

“Guaranteeing the health and safety of the State University of New York’s students, faculty and staff is rightfully Governor Cuomo’s priority. We appreciate the Governor’s announcement that SUNY campuses will move to a distance learning model for the remainder of the spring semester.Continuing SUNY’s tradition of inclusive and accessible academic excellence is as important as ever. The SUNY Student Assembly looks forward to working with Chancellor Johnson and her team to ensure that students have all the resources and support that they need as we make this transition.”

Similarly to Canisius College (see below), Villa Maria College is suspending all in-person classes beginning March 23, following spring break. They will go online for all classes, including studios and labs, until April 13. The college plans to resume in-person classes on April 14.

The campus will remain open for students who need to access its services and staff are expected to report.

"We are taking this action to minimize the risk to our students, faculty and staff by reducing population density in classrooms and across campus, nothing is more important than the health and safety of our college community," Matthew Giordano, the college's president, said in a news release.

Following the governor's announcement, SUNY Buffalo State announced that it will be starting remote classes on March 30 and continuing through the end of the spring semester. As a result, the college will be canceling classes next week, starting spring break early, and expanding it to two weeks.

Buffalo State says the extension of spring break will allow faculty and instructional designers dedicated time to work together to prepare for the switch to remote instruction. They are also creating alternatives to studio and lab work as well as student teaching.

Buffalo State says the campus will remain open during this time.

The college added that it will make every effort to accommodate students who remain at the campus over spring break or during the rest of the spring semester. However, Buffalo state says students and families should be aware that services such as dining may be reduced or significantly altered due to limiting large gatherings in campus spaces.

The University at Buffalo says it has been preparing to move to a distance learning model for student instruction and will now move forward to implement its plans, beginning March 23 and running through the end of the semester.

UB says it will provide more information to students, faculty and staff during the week about implementing distance learning and the availability of on-campus services such as residence halls and dining.

The decision to switch to distance learning might continue for the rest of the semester, depending on the school's evaluation. A statement said that a decision would be made by April 6.

For the next week, at least, the campus remains open and staff will report to work, as usual.

Following the governor's announcement, Hilbert College announced on Wednesday that it is also transitioning to online courses. Hilbert says it is suspending all residential academic and student life programs at the end of the academic day on Saturday.

Hilbert is transitioning to online classes for two weeks starting March 15, with plans to resume traditional classes and campus activities on March 30. All athletic programs will be suspended during this time.

The college is also instructing all residential students to move off campus no later than 5 p.m. Saturday. However, the college says it will otherwise remain open for normal business operations.

“This was not an easy decision,” Hilbert President Dr. Michael Brophy said. “We realize this will create some challenges for our Hilbert campus community. However, we are taking this action in a proactive effort to safeguard the health and wellness of our students, faculty, and staff, as well as the entire Western New York community.”

D'Youville announced on Tuesday that it is shifting all undergraduate and graduate classes to digital platforms starting March 18.

“These are extraordinary times," Clemo said. "Out of an abundance of caution and in consideration of the World Health Organization’s emphasis on maintaining social distance as a basic preventative measure against COVID-19, we will migrate lectures and classroom-based learning to digital platforms beginning on Wednesday, March 18."

D'Youville has plans to reevaluate the status of their digital classes on March 30.

Fredonia University said students will be moving out of residence halls on or before March 19.

"Students who have special circumstances (i.e. international students) or are unable to move out by March 19 should contact the Office of Residential Life (located in Gregory Hall) to make arrangements," according to a statement.

Fredonia will educate via distance learning for the remainder of the semester, which will end no later than May 15.

SUNY Erie Community College announced Tuesday that face-to-face instruction, including labs, are suspended now through March 29. The college says these classes will resume in a distance learning format no later than Monday, March 30.

SUNY Erie President Dr. Dan Hocoy says students should not come to the college to attend previously scheduled lab sessions. However, clinicals and internships may continue, if the opportunity is available.

The college says faculty and staff will use the time between now and March 29 for planning, as the college moves toward new options for the remainder of the semester. This includes redesigning lab instruction into a distance learning format.

Hocoy says a full plan for the rest of the semester will be communicated to students no later than March 25.

All large-scale events at SUNY Erie will be canceled until further notice, including, the Open Houses, Career Fairs and Transfer Fairs scheduled for the week of March 30.

A statement from a spokesperson with the college says in part, "Our primary concern is to fulfill the educational needs of our students while keeping in mind the health and well-being of our entire campus community."

Niagara University will not be moving classes online just yet. However, the college is taking additional precautions.

Niagara University will begin its spring break early. Originally, the college was set to resume classes on March 23. Out of precaution, classes are being pushed back a week.

Decisions to hold on-campus events will be made on a case by case basis.

The college says its Office of Academic Affairs is working with faculty to deliver courses with as little disruption as possible once students return.

During this time the university will be open for business operations.

The school had recently announced that it is temporarily suspending all organized campus events and most university-sponsored student travel. The college says this includes extracurricular student activities and events hosted by the university, guest lectures, conferences, competitions, club sports, intramurals, student club events and more.

The university says the only students currently allowed to travel are those who need to do so for assignments directly related to instruction or course requirements.

The college says these activities and events will be suspended as of 5 p.m. Friday until at least March 31. Following March 31, St. Bonaventure says it will re-examine the situation and decide if the suspension needs to be extended.

“While we have no reported cases on campus or in the surrounding community, we’re exercising an abundance of caution in limiting crowd gathering,” Dr. Dennis DePerro, university president, said. “We’re fortunate that we have relatively small class sizes so we are continuing with in-class instruction for the time being.

Medaille College is extending its spring break for undergraduate students for an extra week, until March 23.

The college announced Monday that following the extended break, all traditional undergraduate classes will move to online teaching and learning until further notice. Medaille added that post-traditional classes are also online as of Monday.

Medaille says residence halls will remain closed during this time.

Students who are currently in the halls are being asked to vacate no later than Friday, March 20 at 2 p.m. 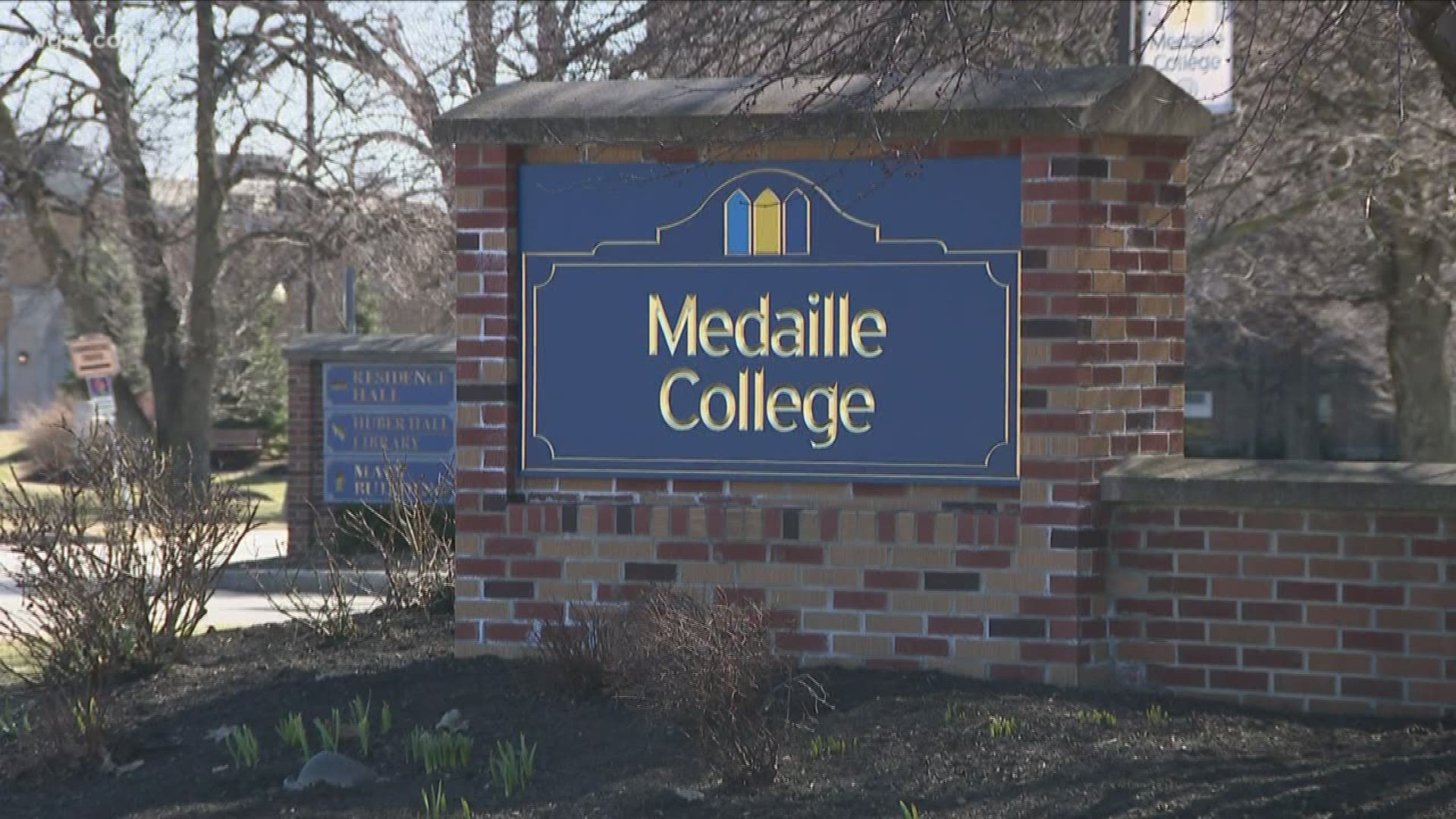 Daemen College will be extending its spring break by an extra week and transition all students to online coursework starting March 23.

Trocaire College is also making some changes to its schedule and will be implementing alternative delivery methods.

The college announced on Saturday that it will be moving up its Easter break to March 18 through March 22 instead of April 8 through April 12. Students are being asked not to come on campus during that time.

The college says classes will be held as usual on Monday, March 16 and Tuesday, March 17, including scheduled midterm exams.

Starting on March 23, and for the rest of the semester, many classes will be moved online or distance education formats. The college says clinical placements will be handled on a course-by-course and program-by-program basis.

Faculty and staff will be on campus, resuming normal operations and schedules, on March 23. Trocaire also says student support services will remain available and various formats will be considered.

RELATED: Buffalo State dorms will not be used as precautionary quarantine site