Here's what you need to know about the solar eclipse happening at sunrise June 10 and how to view it in Buffalo. 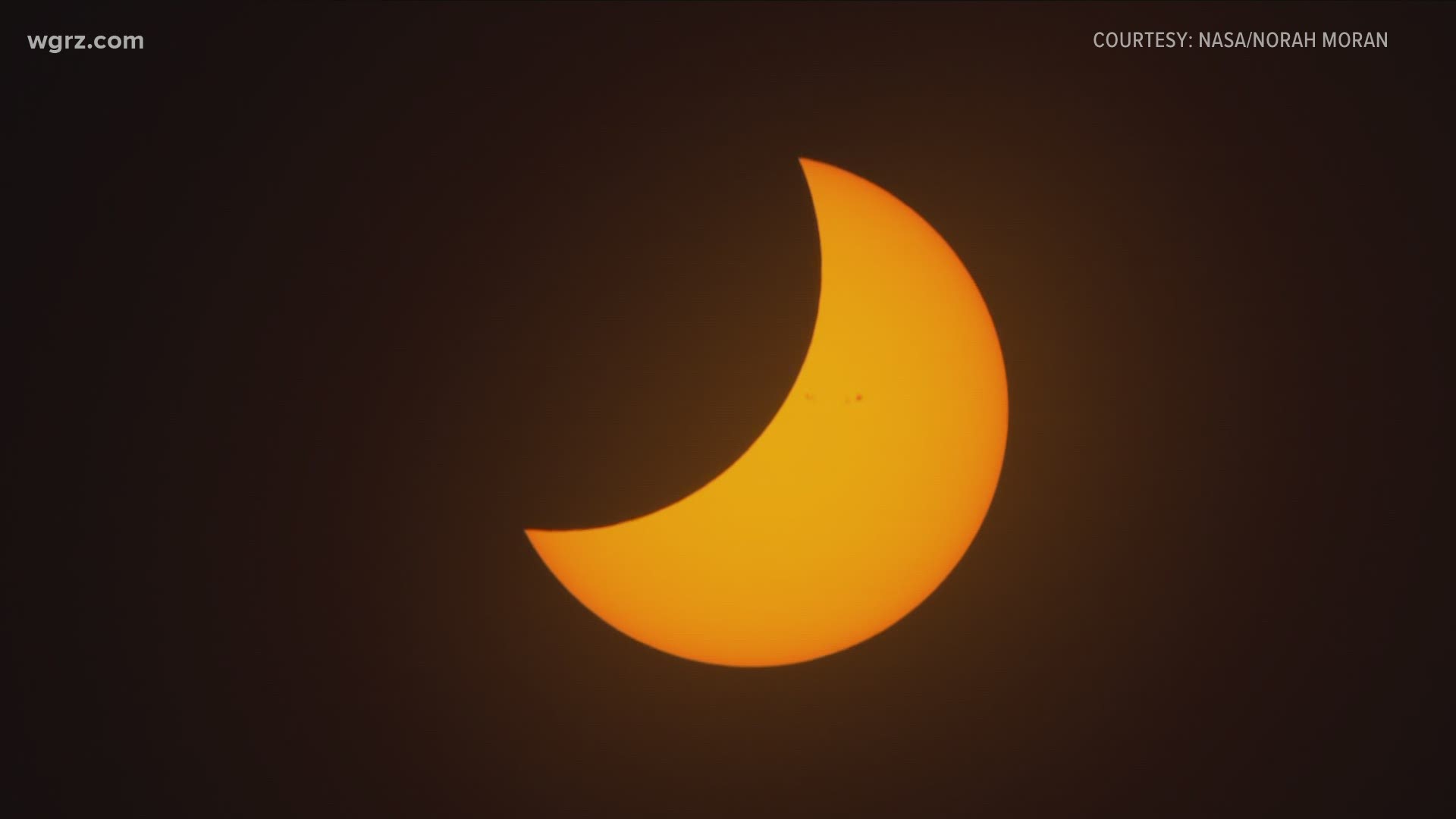 With all the buzz around the upcoming solar eclipse on June 10, here's what Western New Yorkers need to know if they'd like to view the celestial event.

WHAT: A partial solar eclipse will be visible at sunrise Thursday, June 10, 2021. A solar eclipse occurs when the moon's orbit around the Earth aligns in-between the Earth's position around sun. Thus, the moon covers up the sun, casting its shadow on the Earth.

It's important to remember Western New York is not within the path of totality Thursday. This means that the moon will never fully cover up the sun in this region. The local maximum will be around 70 to 80 percent, meaning some of the sun will still be visible as the moon transitions across it.

I’ve gotten a few questions as to what next week’s solar eclipse might look like in #Buffalo. Here’s a time lapse of the 2017 Solar Eclipse from the Johnson Space Center… not within the path of totality. Won’t be exactly this, but it’s an idea. @WGRZ

WHEN: The approximate sunrise Thursday, June 10 is at 5:36 a.m. with the local maximum of the partial solar eclipse occurring at 5:39 a.m. This is when the moon will cover up nearly 70 to 80 percent of the sun. So the solar eclipse will already be taking place while the sun rises Thursday morning. After that, the eclipse will begin to fade out of view for the next hour, finally ending at 6:36 a.m.

WHERE: Buffalo, Niagara Falls and areas north will be the best place to view the partial solar eclipse Thursday morning. You'll want to find an open field or be elevated enough to see the eastern horizon. The only caveat is the forecast... any cloud cover or fog will cover up the sunrise and solar eclipse.

TOOLS: You'll need a special pair of "eclipse glasses" to view the partial solar eclipse. Protective eyewear is a must when viewing a solar eclipse in all phases. These "eclipse glasses" that are made up of special filters that allow us to safely look at the sun. They're stronger than a pair of normal sunglasses and made especially for viewing these solar events. Many local stores and online retailers carry them.

As for photography, you'll need a special camera lens to capture the solar eclipse clearly. Amateur photographers will be able to use a generic camera and even the ones on your phone, just make sure to wear the protective eyewear and know that the photo won't be as clear when you go to view it.

This partial solar eclipse will be a good practice run for when Buffalo is within the path of totality for the April 8, 2024, solar eclipse.

Emphasis on protective eyewear‼️ Search “eclipse glasses” online & you’ll find several options. You cannot wear sunglasses and/or look at a solar eclipse in progress without these! You’ll know you found an effective pair when try them on & can’t see anything in normal light @WGRZ pic.twitter.com/th87Ua78gB