'He was looking people directly in the eye, making eye contact, it was so scary. He wasn't remorseful at all,' one witness explained. 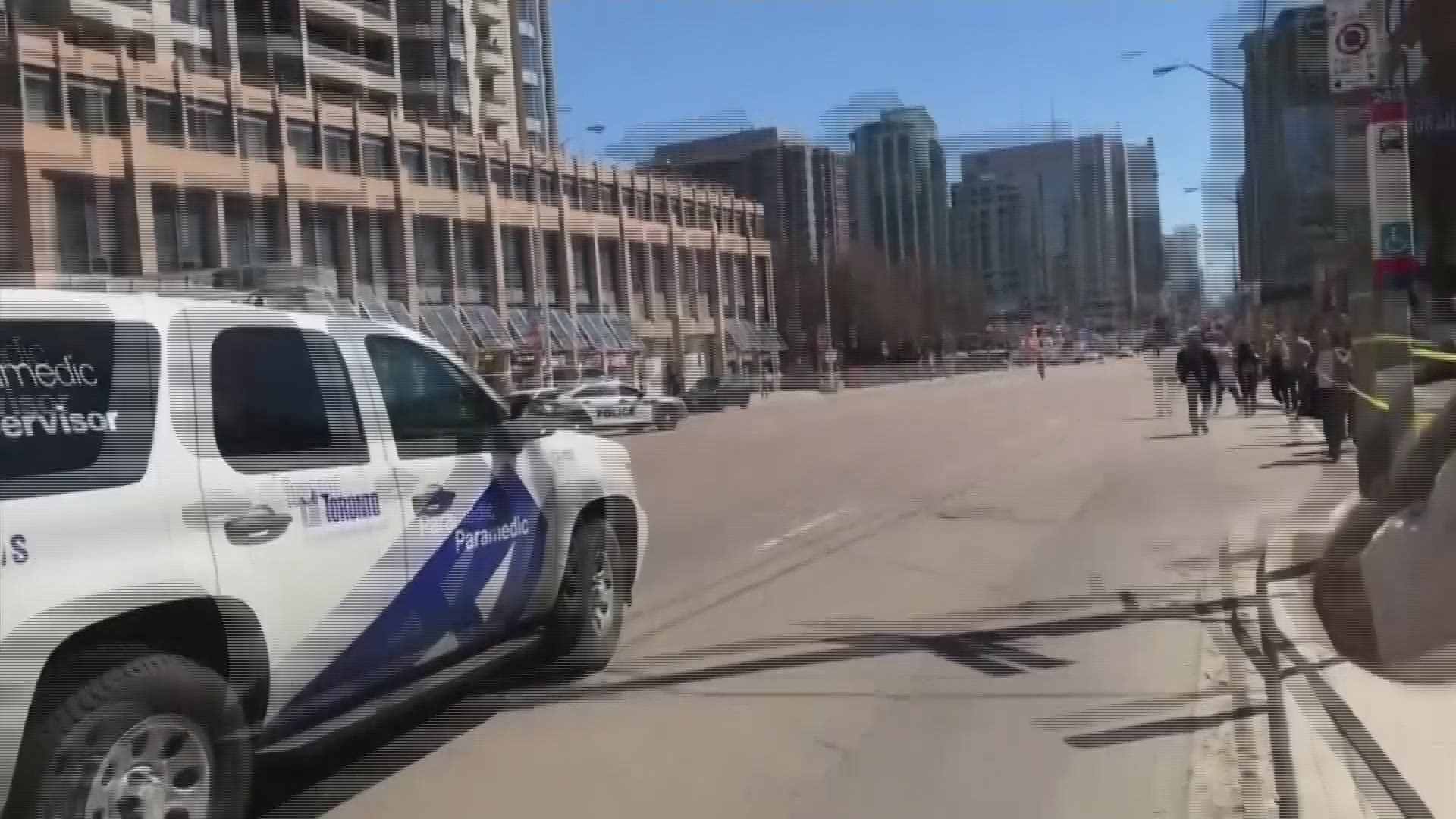 TORONTO — Police in Canada's biggest city were piecing together witness accounts and surveillance video on Tuesday to determine why a 25-year-old man plowed a van into a busy stretch of sidewalk on a sunny afternoon in one of the deadliest incidents of violence in the country's history.

Witnesses and the city's police chief said the suspect, who was quickly captured following a tense confrontation with police, appeared to intentionally drive the rental van into the crowd along busy Yonge Street in north Toronto.

"It was like he playing a video game, trying to kill as many people as possible," said Panna Patel, 42, who works in the area and was getting cash from an ATM when she heard what at first sounded like explosions. "He was looking people directly in the eye, making eye contact, it was so scary. He wasn't remorseful at all."

Suspect Alek Minassian was charged with 10 counts of first-degree murder and 13 counts of attempted murder.

Minassian learned of the charges in a brief initial hearing before a judge in Toronto on Tuesday. He wore a white jail jumpsuit and had his hands handcuffed. He showed little emotion.

He was asked to say his name and if he understood an order not to have any contact with anyone injured in Monday's crash scene on a busy sidewalk.

He did not enter a plea to the charges and was ordered to return to court on May 10.

Prime Minister Justin Trudeau dismissed the possibility of terrorism, saying that authorities see no national security element in the case.

He told a news conference that the incident "hasn't changed the overall threat level in Canada," though it occurred as Cabinet ministers from the G7 nations were meeting in Toronto.

Authorities so far had not disclosed a possible motive or cause, though "the incident definitely looked deliberate," Police Chief Mark Saunders told reporters at a late-night news conference.

Saunders said Minassian, who lives in the Toronto suburb of Richmond Hill, had not been known to police previously. An online social media profile described him as a college student.

Authorities released few details in the case, saying the investigation was still underway, with witnesses being interviewed and surveillance video being examined.

"We are looking very strongly to what the exact motivation was for this particular incident to take place," Saunders said. "We need every single piece of this puzzle so we can have a fulsome picture and account as to exactly what took place here."

The driver was heading south on busy Yonge Street around 1:30 p.m. and the streets were crowded with people enjoying an unseasonably warm day when the van jumped onto the sidewalk.

Ali Shaker, who was driving near the van at the time, told Canadian broadcast outlet CP24 that the driver appeared to be moving deliberately through the crowd at more than 30 mph.

"He just went on the sidewalk," a distraught Shaker said. "He just started hitting everybody, man. He hit every single person on the sidewalk. Anybody in his way he would hit."

Witness Peter Kang told CTV News that the driver did not seem to make any effort to stop.

Video broadcast on several Canadian outlets showed police arresting the driver, dressed in dark clothes, after officers surrounded him and his rental Ryder van several blocks from where the incident occurred in the North York neighborhood of northern Toronto. He appeared to make some sort of gesture at the police with an object in his hand just before they ordered him to lie down on the ground and took him away.

Witness Phil Zullo said that he saw police arresting the suspect and people "strewn all over the road" where the incident occurred.

"I must have seen about five, six people being resuscitated by bystanders and by ambulance drivers," Zullo said. "It was awful. Brutal."

Police shut down the Yonge and Finch intersection following the incident and Toronto's transit agency said it had suspended service on the subway line running through the area.

Trudeau on Monday expressed his sympathies for those involved.

"We should all feel safe walking in our cities and communities," he said. "We are monitoring this situation closely, and will continue working with our law enforcement partners around the country to ensure the safety and security of all Canadians."

The stretch of Yonge Street where the victims were struck remains closed to traffic and was expected to stay blocked off for several days as police continue what is likely to be a lengthy investigation.

The incident prompted police to beef up security and close several streets around the Air Canada Centre on Monday night for the Toronto-Boston NHL playoff game. Police tweeted that similar road closures may be in effect for the Toronto Raptors NBA playoff game on Wednesday night.

The incident occurred as Cabinet ministers from the major industrial countries were gathered in Canada to discuss a range of international issues in the run-up to the G7 meeting near Quebec City in June. Canadian Public Safety Minister Ralph Goodale called the incident a "horrific attack" and said the G7 foreign ministers extended their condolences.