No. Charter school will NOT be charging students for paper

Concerned parent contacts us to investigate letter given to son, which turned out to be part of a social studies lesson. 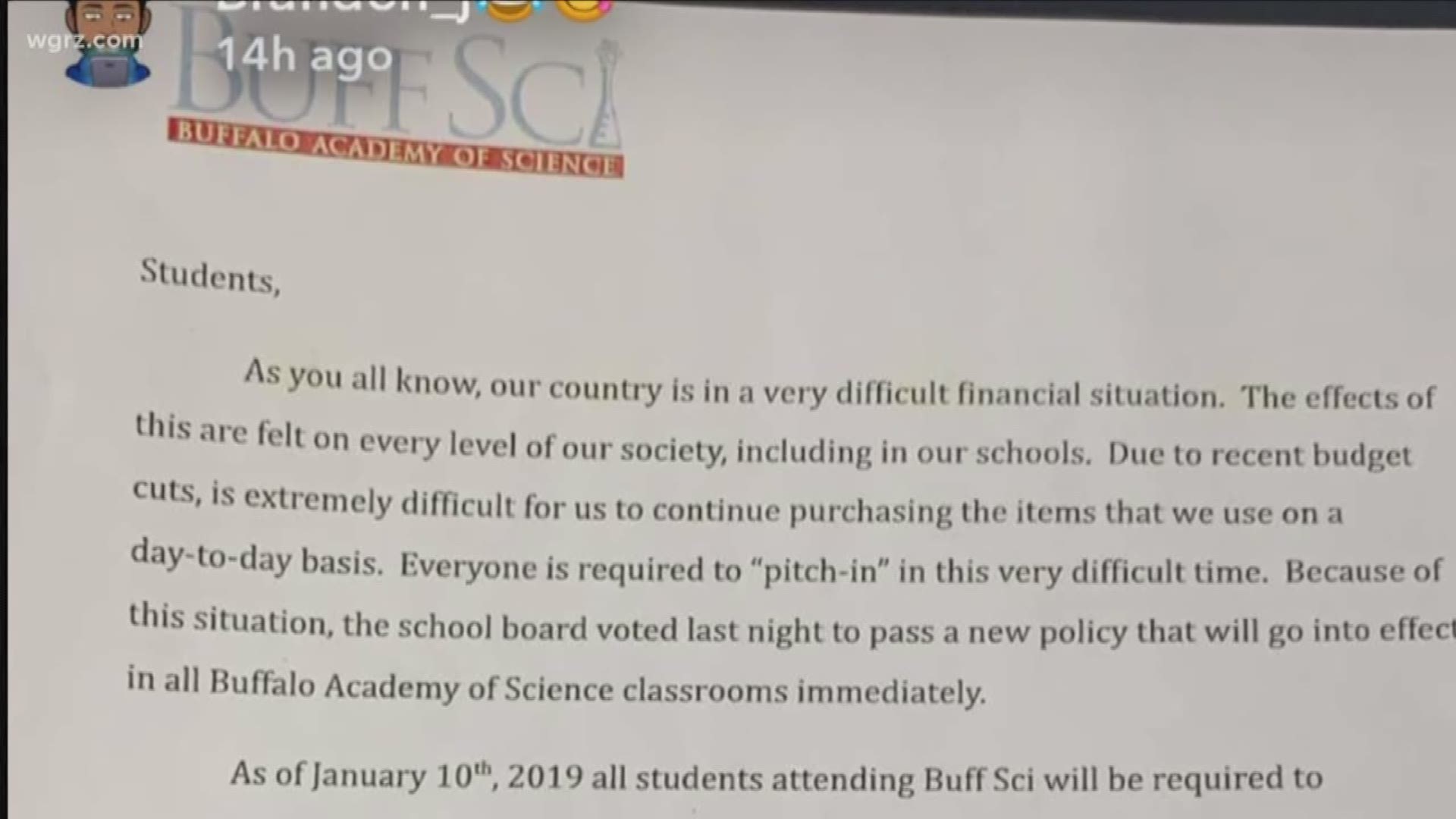 BUFFALO, N.Y. — A concerned parent of a student at the Buffalo Academy of Science Charter School contacted 2 On Your Side with concerns that the students would soon be charged for paper in school.

“This is ridiculous,” she said, of the official looking notice on school letterhead and signed by the principal, informing students that “because our country is in a very difficult financial situation,” students would be charged five cents for each sheet of paper given to them for tests, homework assignments, or even notes home to parents.

“What if a family can’t afford this?” asked the parent. “Does that mean a child won’t be allowed to take tests or do homework?”

These would all be legitimate concerns, if indeed the school was actually going to charge.

But, it turns out: they will not.

The letter was given to students in a 7th grade social studies class taught by Sarah Maurer, and was part of a lesson on taxation in colonial times.

“I like to do some experimental lessons in my class which is why I decided to concoct a letter (with the approval of school administrators) based on a lesson plan I purchased on line.”

Maurer further explained that students are learning about the period in history in which colonists were being taxed for a variety of items by England without representation in government.

“It’s supposed to simulate the Stamp Tax… and a point in colonial history when mostly every paper such as pamphlets, deeds, or wills had to have a stamp on them which the colonists actually had to pay money for under a legal requirement which they were forced to abide by,” she explained.

Ideally, when presented with this, the students gain an understanding on how upset the colonists were which contributed to their decision to revolt and establish a new nation.

“They don’t know right away that we’re really not going to charge them. All they think is, ‘oh my gosh my school is making me go ahead and pay money for every single handout sheet.' And they get upset by it.”

When clued in, they also realize how those colonists must have felt.

The letter is never sent home to parents.

“It was addressed to the students,” she said.

However, in this case a student, who was so impassioned and concerned by the prospect of being “taxed” for paper (which was part of the goal of the lesson), sent a picture of it to their mother who then contacted us.

Maurer says she has used this teaching tool for three years and has never had a parent think that the school was actually going to charge for paper.

Joseph Polat, the school’s director, was appreciative of the opportunity to let people know that it was part of a creative lesson, and to clear things up before it started being shared on social media… and perhaps sparking a 'revolution' among parents.