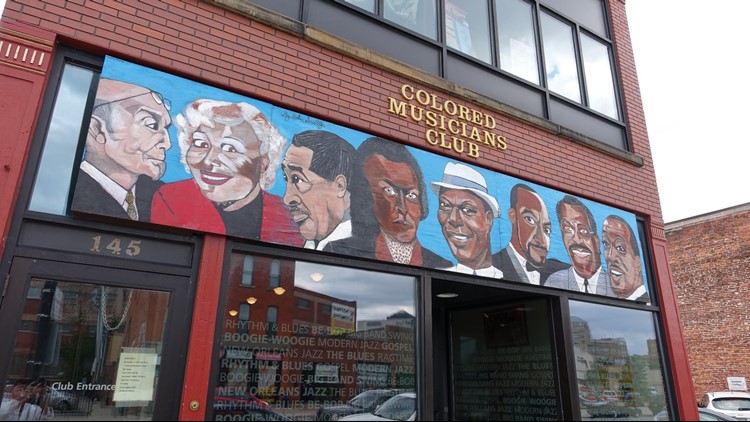 BUFFALO, N.Y. — If you drive by too fast, you may miss it! But you will want to take your time at The Historic Colored Musicians Club of Buffalo because it is filled with rich history.

The club's origin dates back to 1917, when the only musicians union in Buffalo, Local 43, refused to admit any African American musicians. The group then decided to form a union of their own, Buffalo Local 533.

Current Colored Musicians Club president George Scott said the group moved around several places before they moved into the building located at 145 Broadway.

"Actually one of the co-founders of the union, which would be Lloyd Plummer, had his insurance office downstairs," Scott said. "The gentleman who owned the club, or the building rather, said that he was looking to sale the building. So they went back to the membership. 1935, they bought the club."

The Colored Musicians Club became an after spot for musicians to gather after performances. You could catch the greats such as Count Basie, Duke Ellington, Lena Horne, Charlie Parker, Dizzy Gillespie, Miles Davis, and John Coltrane. When the great Miles Davis and John Coltrane were teens, they had to wait in the background for their turn to play.

But don't think musicians from the Queen City and Western New York couldn't hold their own.

"Well actually, the local musicians felt that they were just as good as the national musicians." Scott said. "And there were many of nights where they chased out the name guys out of here. So these guys were not shy about their talent."

You can learn more about the Historic Colored Musicians Club by watching WGRZ's newest show commUNITY. 2 On Your Side's Claudine Ewing and Pete Gallivan are the host of commUNITY which tells the stories of the great people, places, and culture in Western New York. The show also tackles the issues impacting us all. You can watch the first episode of the show below.

Mobile app users can view the episode by clicking here.