Snowvember through the lens

A look through the lens of one photojournalist who was asked to take care of a neighbor during snowvember. This story was originally published in November 19, 2019. 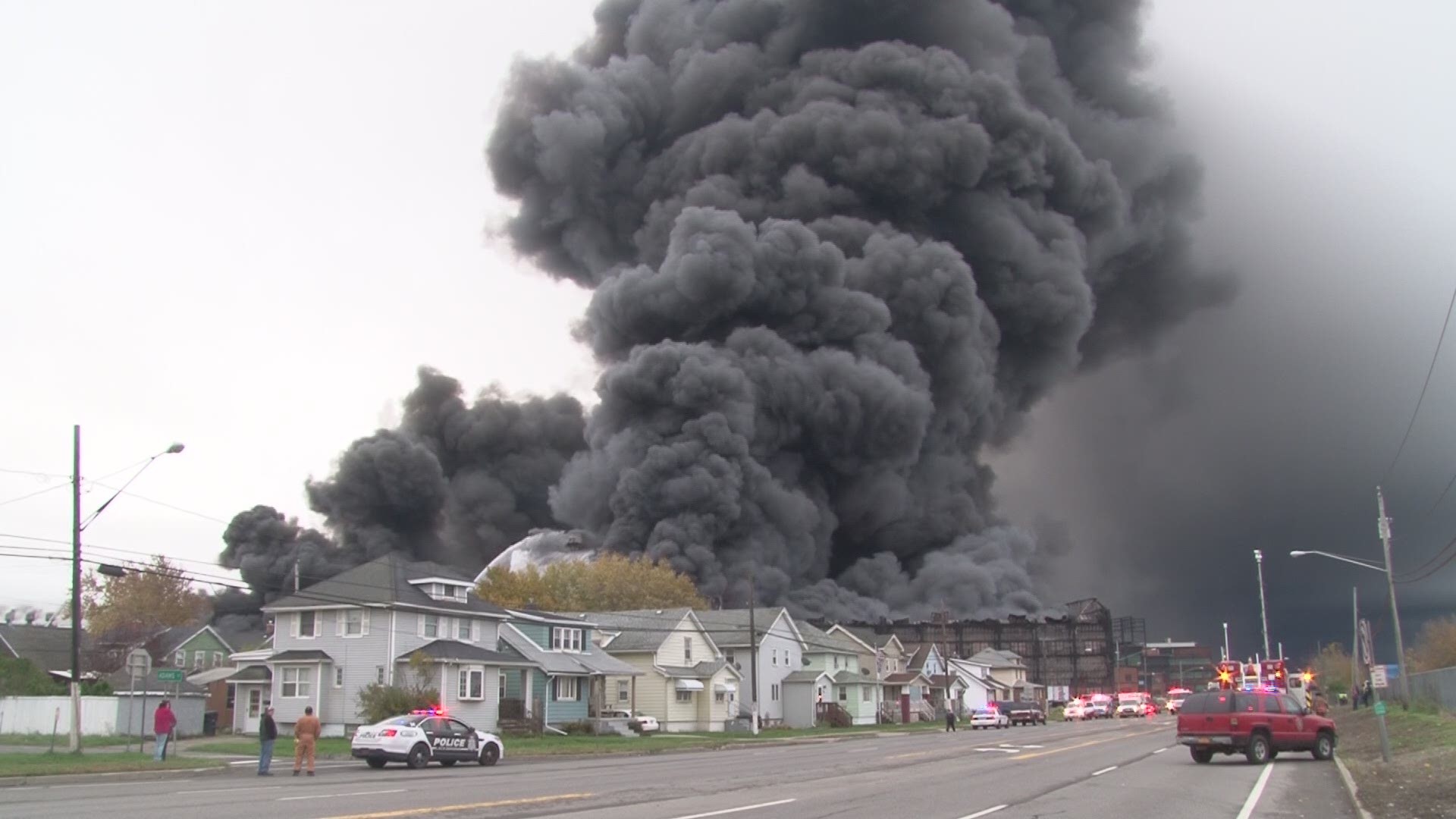 BUFFALO, N.Y. — This is a first-hand account of the Snowvember storm on November 18, 2014, from the perspective of WGRZ journalist Nate Benson. This story was originally published in November 19, 2019.

I’ve covered a lot of different stories in my news career. From presidential visits, inaugurations, fires, and stories of innovation. After a while, they all kind of blend together.

You become a creature of habit to a degree when you cover the news. But one story I think about on a regular basis, and knew from the first few moments of covering it, was very, very different.

For me, coverage started on November 17 in Springville with Pete Gallivan. To a degree, it was a fairly normal day for us, in the sense that it was typical snow coverage. We did our live hits, went to the nearest salt barn and spoke to a highway supervisor. We swung by Kissing Bridge where they were in heavy snow making mode.

It was a normal day.

By the evening of November 17, things had changed.

I was called back into the new station around 11 p.m. that evening to prepare for coverage the next day. Almost immediately the impact of the storm was having an effect on how I could cover the story.

I was assigned to work with Heather Ly on the November 18. Normally she would meet me at the station and we will roll out together to the destination of our story. It was quickly determined she wouldn’t be able to make it into the city due to the amount of snow at her house. The plan shifted and we were going to try and meet up in Orchard Park.

After a brief discussion with our executive producer Collin Bishop, it was determined I would take one of our live trucks and work my way to Orchard Park. This was around 2 a.m.

If you know anything about a news van you’ll know they’re heavy, but they’re pretty much a white Chevy van without four-wheel drive, and it houses a sixty to one hundred-foot mast that raises and lowers to transmit a signal. They’re not ideal for whiteout, snow-covered road conditions.

Around 3:30 a.m. I had only made it as far as the Tim Hortons on Seneca Street near Mineral Springs Road. There, I encountered an ambulance and another vehicle that was stuck. I was an hour out from the top of our news program and not even halfway to Orchard Park yet.

Another hour of treacherous driving and I made it as far as the NOCO station on North Buffalo Street in Orchard Park. I was able to get the live truck up and running and broadcast a little bit. Unfortunately, we were near white-out conditions at the time and our signal couldn’t cut through it.

Credit: Nate Benson, WGRZ
A Jeep found itself stuck in a ditch during the height of the Snowvember storm

Knowing the plight of my vehicle situation, our assignment editor asked me to start working my way back to Buffalo as carefully as I could and be in contact as much as possible, shoot when possible but be safe. I can’t emphasize enough that the newsroom leaders are empathetic in a situation like this, and our safety is the priority.

I chose to swing by what’s now New Era Field, just to get a glimpse of what was going on there. I quickly pulled over to get a shot of the stadium, but all you could see was the lot six sign. I worked my way around the area the best I could before getting stuck near the Original Pancake House on Union Road around 9 a.m.

This is where I had my first breakdown for the day. I called one of our managers and used language I can’t use here to express my desire for someone in a four-wheel-drive vehicle to come to rescue me. I remember hanging up the phone after calmly yelling “I don’t care if you have to rent a helicopter, get out here and get me.”

Stress had clear set in.

I took a few moments and few deep breaths and eventually worked the news van out of the shallow ditch I had drifted into, with the help of a passerby. Once I knew my van was safely out, I helped that same person get their car unstuck. I called the newsroom to tell them crisis averted and continued northbound on Union Road.

I knew that the demarcation line was basically Broadway. If I could make it to Broadway I would be able to make it back. Not knowing what was ahead of me I commenced the journey.

I encountered multiple people stuck at the intersection of Union Road and Clinton Street, including an official from the Erie County Sheriff’s Office, who was frustrated with all the people trying to use the roads during a driving ban.

I chugged along the best I could before ultimately getting stuck somewhere between French Road and Losson Road. From roughly 10 a.m. until 7 p.m. Union Road would become my home.

At times the wind gusts were north of 40 miles per hour. It wasn’t safe for me to raise the mast of my live truck to feed video back to my newsroom. As far as I knew, I was one of only a couple of photographers with their equipment in the heart of the storm. Others were stuck in traffic, shooting cellphone video, or on the outskirts of the storm, carefully working their way in as to not suffer a similar fate that I had.

I had to get my footage back to the newsroom. Eventually, I realized I could use my cellphone as a hotspot, and then file transfer the video back to the news desk. You have to remember 4G LTE was in its infancy at the time, and I had shot gigabytes worth of video. So I needed to compress clips enough where they were small but still broadcast quality. After some trial and error, I was able to get my trove of video back into the newsroom but it took a few hours.

While that was transmitting I was still capturing the scenes around me. Volunteers with snowmobiles were assisting first responders. Busses were getting stuck. People were running out of gas and walking to the nearest gas station. The mail would not be delivered. Front-loaders were carving paths just big enough for bobcats with first responders in them to get to emergencies.

In the late afternoon, I was asked to call into the broadcast, which hadn’t stopped broadcasting since 4:30 a.m. I gave my account to Scott Levin and Maryalice Demler the best I could. Now on the job for roughly 18 hours, fatigue was starting to set in, as was the frustration of being seemingly trapped.

Then, a knock on my van door.

Credit: Nate Benson, WGRZ
A first-responder from Main-Transit Fire Department bringing a person to a shelter. The shelter was closed and the first responders asked WGRZ journalist to let him in his new vehicle until an ambulance could come to the rescue.

It was a first-responder from, what I believe, was the Main-Transit Fire Department. He said, “We need you to take this guy in, they closed the shelter up the road and hypothermia is setting in, if you don’t, he’s going to die before we get him to safety. We’ll bring an ambulance back when we can.”

The man looked familiar. It turns out, I captured him in a video clip earlier in the day.

At this point, I’m no longer a news man. I told the man to strip down so I could give him my spare sweatshirt, jeans, and socks, his clothes were frozen solid - my father taught me at an early age to pack a go-bag of supplies if I’m traveling in snow. Handy advice, coming to fruition.

I kept talking to the man. He was a bit incoherent at times as he was freezing, only wearing a leather jacket, jeans, and sneakers. I told him about my day, asked him about his, why he went out today... it was for a prescription.

A couple of hours passed and in the distance of the now black snowy night I saw flashing lights. The ambulance the first-responder promised had finally arrived with a front loader guiding and carving a path towards me. The first responders got the man out of my news van and asked if I wanted to tag along. I passed, and opted to drive in the freshly carved trail that would lead me to the light at the end of the tunnel.

I said goodbye to the man. In the haste of the moment and keeping him alive, I realized as he was pulling away from the scene that I never got his name. To this day I think about that situation. Some news people would have interviewed him or live-streamed the whole thing. At the time, perhaps in my exhaustion and for his privacy, I opted not to capture the moment. It was worth more to me at that time to be a neighbor for him.

It's now 6 p.m., I began my, what would become hour plus, journey north on Union Road towards Broadway. As I approached William Street I somehow met up with Jeff Preval, who himself got stuck and was covering the story in the area. I gave him a pair of socks too. People have to start traveling with spare pairs of socks in inclement weather.

I pulled in to the station parking lot at 8 p.m. I shook the hand of our executive producer who was still at work and said “one hell of a day” to which he said, “at least you had the live truck.”

With that, closed out the day the first real day of the Snowvember storm, and what would turn into one of the longest weeks of my career.