Should New York get rid of Daylight Saving Time?

Switching the clocks twice a year can have ill effects on sleep, among other things. 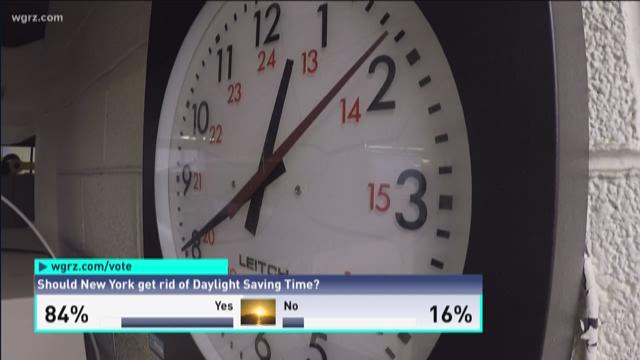 Buffalo, NY — It's that time of year again, to spring the clocks forward an hour for daylight saving time.

But the questions is, should we keep doing this or should we just stick to one time, whether that's standard time or daylight saving time?

According to many farmers, having the daylight saving time switch is helpful for agriculture and farmers out in the field. "It gives us more daylight later in the day... I'd rather have the extra hour in the evening than in the morning because if the time was not switched, it would be light at four thirty in the morning," a farmer in Niagara county said.

Shifting the clock one hour, twice a year, does have an effect on sleep, according to neurologist and sleep medicine doctor Sandra Block. Block is the Medical Director of the Buffalo Medical Group's Adult and Pediatrics Sleep Center.

"The nucleus in your brain...is a pacemaker for your body. And it helps you figure out being awake when it's light out, being asleep when it's dark out. Every time we do this, we are giving ourselves a little circadian rhythm disorder in a way," Dr. Sandra Block said. "The spring time one is a harder one, that's where you are losing sleep."

Dr. Block also says the time shift is similar to jet lag, but can potentially cause bigger problems.

"There was a study done in Michigan a couple years ago, showing an increase in heart attacks around that time, so it's interesting, there's probably some physiologic changes," Dr. Sandra Block said. "Some extra stress from this, which is maybe not such a mild thing. There are more car accidents around the time of the spring change as well."

Some states are trying to do away with the time switch and just keep the clock consistent, and a few states already have. "You just have to choose something and stick with it... it takes people a good week or so to get over these effects and the physiologic changes that can occur," Dr. Sandra Block explained.