Monday will be rainy but Tuesday and Wednesday will likely be a mix of rain and snow. 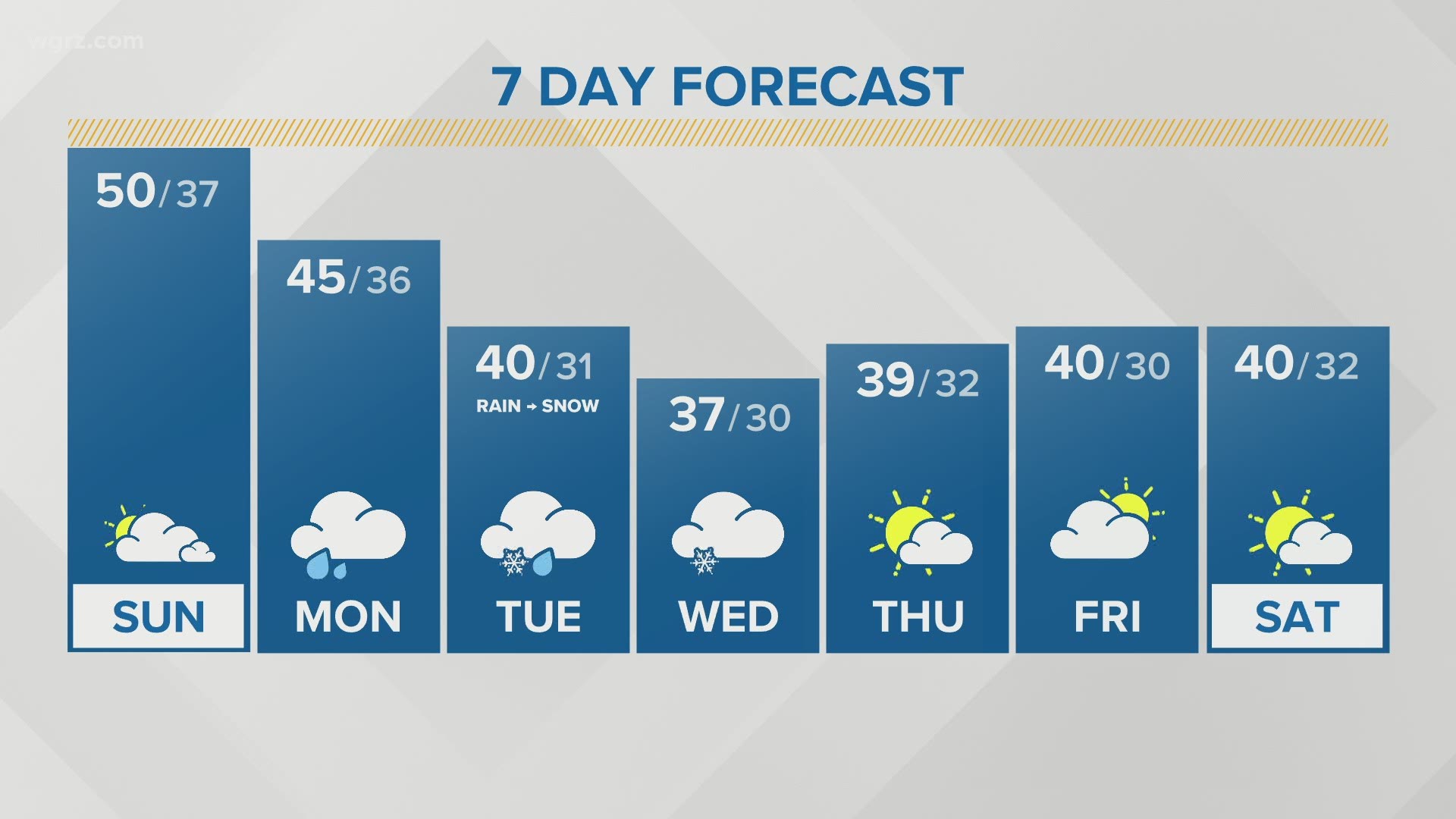 BUFFALO, N.Y. — November has treated Western New York fairly gently with most days being warmer than normal and only a couple of truly turbulent weather systems. To date, Buffalo has only measured 0.8 inches of snow and the city is about 1.50 inches behind on monthly rainfall.

That will change when we flip the calendar to December, at least for a few days.

A storm system is brewing in the Gulf Coast this weekend and it will make a slow path towards central New York by tomorrow. The track of the storm, while it could still vary, has Western New York on the colder, breezier side of the system.

As the storm arrives, temperatures will still be high enough to support a soaking rain for Western New York on Monday. Rainfall will begin by mid-morning and continue for most of the day. Up to 1 inch of rain is possible on Monday alone.

As colder air starts to filter in from the north Monday night, the rain vs. snow line will get closer to our area. That means temperatures will be near enough to freezing to allow some wet snow in higher elevations Monday night with rain mixing in for lower elevations.

Tuesday looks like a raw day for all with temperatures in the upper 30s. Precipitation will likely fall as mainly wet snow, but some rain may mix in near the lakes. Tuesday will also be a breezy day with winds out of the northwest, making things feel unpleasant at best.

Before we talk about snowfall totals, may I direct your attention to the rainfall we're going to get on Monday? Upwards of 1" in most communities! @WGRZ #StormTeam2 pic.twitter.com/YCuLwvkzTA

Based on current models, there is a good chance for some accumulating snow in the higher elevation spots Tuesday into Wednesday. If precipitation rates are high enough, some accumulation is possible in Buffalo and surrounding areas as well. A few lake effect showers will last into Wednesday as this storm system finally pulls away.

Anyone with travel plans Monday through Wednesday should keep an eye on this system. Snow totals don't look too disruptive now, but soaking rain and wind can still cause problems on the roads.

At this point, expect an unsettled start to December with the potential for a couple more systems in the Eastern U.S. through the first couple of weeks.

Aside from the beautiful Sunday coming our way, this is what we're directing our attention to. A storm that brings heavy rain and then snow to WNY. Details are coming up at 6:30 a.m. on @WGRZ! #StormTeam2 pic.twitter.com/iJ0o6kqMEq