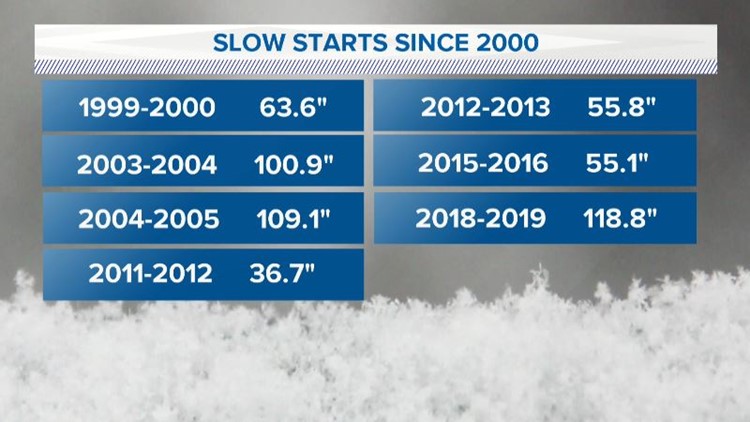 Photo by: WGRZ
Several winters have started off slow, just like this winter. A few of them still wound up with solid snowfall totals in Buffalo.

If you look forward to snowy winters, there’s no doubt you’ve been disappointed this season.

January 15 technically marked the midway point of the National Weather Service’s definition of the “snow season” (October 1-April 30), and Buffalo only has about 35” to show for it.

If you’re a skier or snowmobiler, you’re really hurting. The snow we actually have gotten hasn’t stayed long enough to play in.

Only four days this season have had at least 6 inches of snow on the ground at the Buffalo Airport. All four of those days were in November. The Southern Tier has fared a little bit better, but no doubt the ski resorts have been grateful for their snow guns.

Snow-lovers, don’t panic. Snow-haters, keep that snowblower handy. Remember, it is only January. Lake Erie is wide open. And there have been plenty of recent snow seasons with some big time second-half comebacks.

Last winter is a perfect example. On January 15, 2019, just 32.4” of snow had fallen at the Buffalo Airport. That’s less than we’ve had this season!

Then almost exactly one year ago, a prolific week of lake effect snow got us caught up pretty quick. Over 60” of snow fell between January 24 and January 30. If you go day-by-day, nearly 25% of the season’s 118” of snow came in just 48 hours.

There were several other slow starts to snow season in recent memory. Heather highlights them in this week’s Heather’s Weather Whys.

Colder air has finally found its way back to Western New York. That sets the table for a come-back. We’ll see if the right weather patterns come together in the coming weeks for some big scores in the snow column.

RELATED: Heather’s Weather Whys: why the wind is at its worst in January

RELATED: Heather’s Weather Whys: why do tires deflate in winter?