In hot water: how climate change is affecting life in Lake Erie 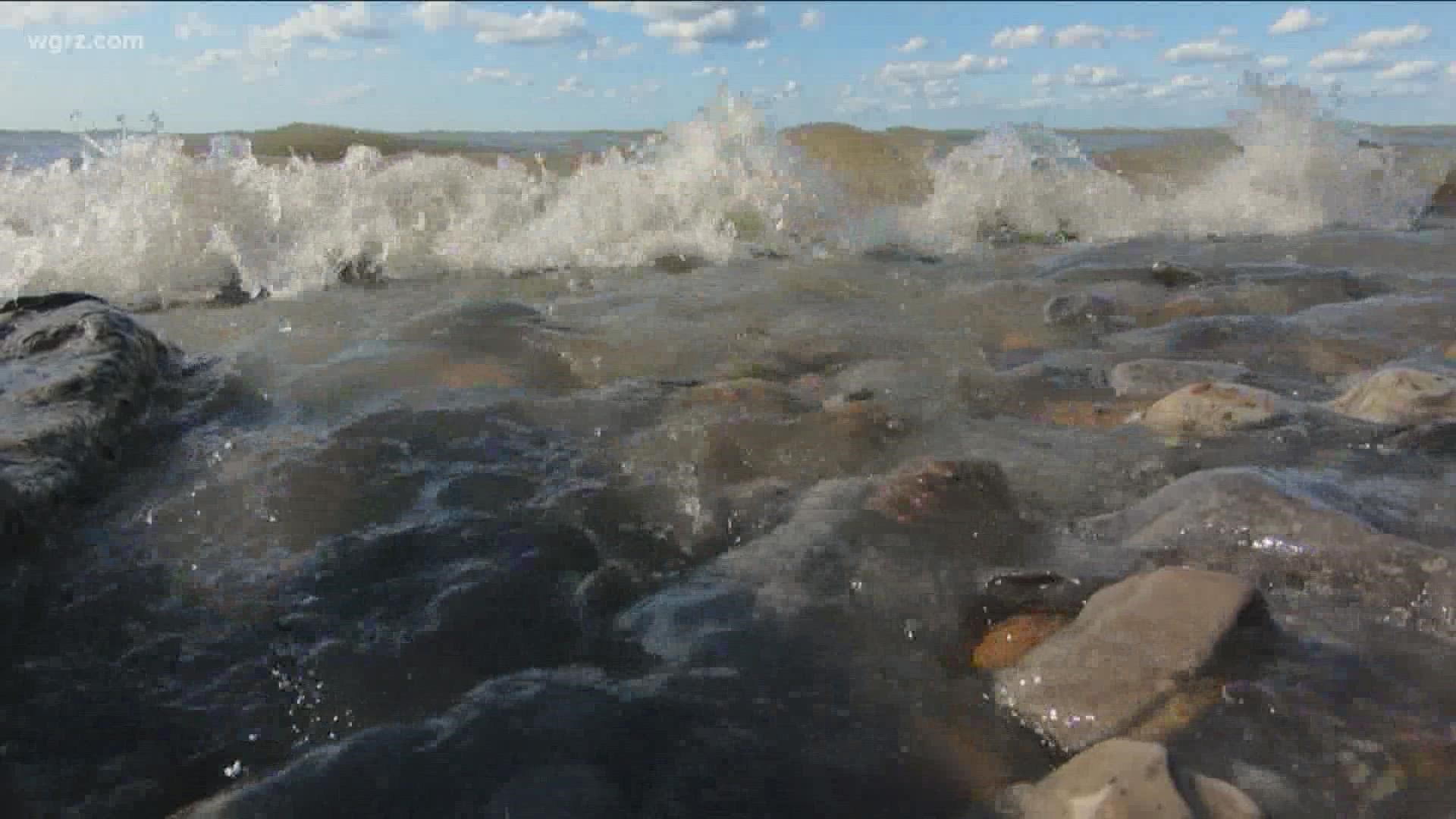 BUFFALO, N.Y. — Lake Erie is central to the weather and life in general in Western New York. It provides about a third of Buffalo’s average annual snowfall. It shields lakeshore communities from summer storms. And of course, it’s nice to have a huge freshwater lake to enjoy right in our backyard.

RELATED: What drives the currents in Lake Erie?

Rising temperatures due to human-caused climate change are already having an influence on the lake’s relationship to our weather. On average, winters are getting milder, leaving the lake open to produce more snow. Summers are getting hotter and more unsettled as the atmosphere holds more moisture and rainfall rates are increasing as a result.

Those weather changes affect us here on land. But climate change and the way it’s been altering our weather patterns also has an effect on the lake water itself and the plants and animals that live in that water.

There’s plenty of data to back this up. Scientists have been monitoring Lake Erie for decades. Various studies show two major trends: oxygen levels in the water are decreasing while phosphorus levels are increasing.

Lower concentrations of oxygen in the water are harmful to fish because just like us, fish need oxygen to breathe. Dr. Chris Pennuto of Buffalo State’s Great Lakes Research Center says low oxygen levels or hypoxia can force two major scenarios: “If [the species] are mobile, they can swim away, but if they’re not mobile … they’re going to have a tough time with that. Some will die, others might hang on."

Like oxygen, phosphorus is an element that is essential for life. We have it in our own bodies and so do other plants and animals, including the creatures in Lake Erie. But too much phosphorus in any environment is a problem.

Credit: Zachary Haslich
Harmful algal blooms are becoming common on the more shallow, western end of Lake Erie and warming due to climate change may intensify the algae's impact on the water's ecosystem.

“The problem comes about when that level of phosphorus is increased. It leads to overgrowth of algae and plants...that leads to a whole chain of events that really are not good for the health of the lake,” Dr. Pennuto said.

Excess phosphorus can lead to large, poisonous algae blooms on the lake surface. Interestingly enough, as the phytoplankton in the algae bloom break down, large amounts of oxygen are used, further lowering the water’s oxygen concentration. So phosphorus and oxygen work in a bit of a cycle.

That’s what can happen, but what is the weather and climate’s role?

In the case of oxygen levels, wind is a big factor. When major wind storms blow over the water, the fast-moving air forces the water to churn throughout its depths. This forces upwelling of the deepest, most oxygen-depleted water in the basin. This process can change the chemistry of the lake in just hours.

Because of climate change, Earth is experiencing more temperature extremes throughout all seasons. Temperature extremes drive storms and storms produce wind. Data shows that high wind events have been increasing in Western New York over the past several decades.

Phosphorus is a little trickier because weather alone isn’t forcing chemical concentrations to increase. Our behavior on land more directly plays a major role. Industries like farming and waste management produce a lot of phosphorus that eventually runs off into the Lake Erie watershed. Many yard fertilizers contain lots of phosphorus too.

Credit: NOAA
Rainfall data gathered by the National Weather Service shows that average annual rainfall has been increasing over the last few decades within the Lake Erie watershed region.

The weather connection comes from increased runoff due to heavy rainfall events or big snowstorms. There’s a complex law of the atmosphere that says a warmer atmosphere holds more moisture, about 7% more moisture for every 1 degree Celsius increase.

More moisture leads to more heavy rainfall events. Heavy rain carries more chemicals into Lake Erie and other bodies of water and if that happens often enough, phosphorus levels in the lake increase. Recent data shows that annual rainfall totals are increasing for every major city within Lake Erie’s watershed.

The problems are clear, but ways to solutions may be a little murkier for now.

“There are a lot of things that are being done, which is in part why Lake Erie has made such a dramatic turnaround from where it was 30 or 40 years ago,” Dr. Pennuto said.

“It’s expensive sometimes. Everybody has to agree collectively to increase their sewer bill. We can’t always think of it as someone else’s problem. I think if we kind of recognize that, suddenly climate change affects all of us, especially here in Western New York where we do spend a lot of time engaging with the water.”

To learn more about climate change and its impacts for Western New York and the rest of the planet, visit wgrz.com/climate and check out our Climate Minute series.