Wintry storm to unleash snow, ice and rain as it marches across 2,000-mile stretch of U.S.

A cross-country storm is set to bring enough snow to shovel and plow along a stretch of about 2,000 miles from the Colorado Rockies to Down East Maine. 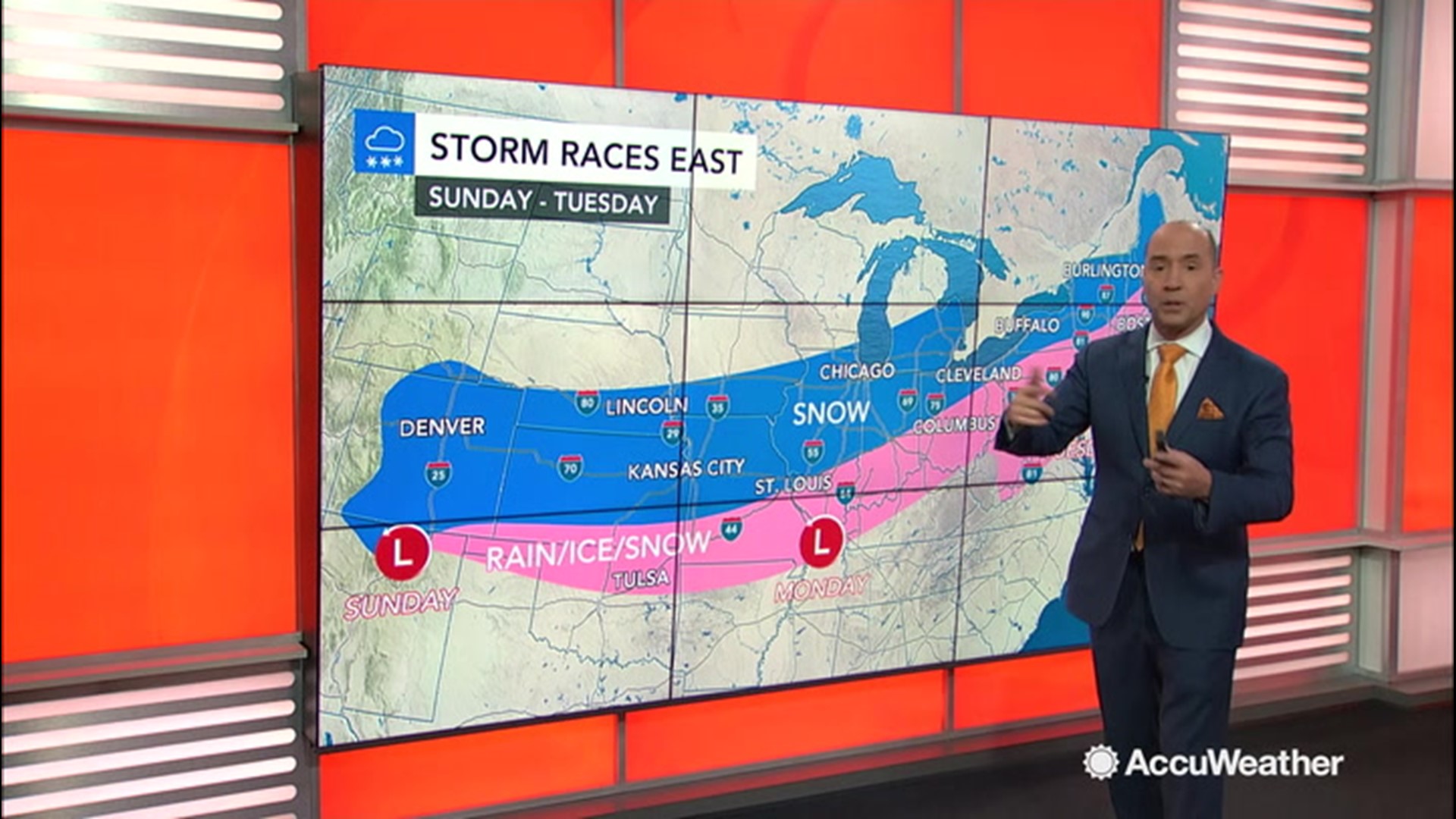 AccuWeather meteorologists have been monitoring for a parade of storms to sweep across the country throughout the middle of the month, and the next one in line threatens to deliver a dose of wintry weather to tens of millions of Americans.

A cross-country storm is set to bring enough snow to shovel and plow along a stretch of about 2,000 miles from the Colorado Rockies to Down East Maine with a wintry mix and rain to the south and pockets of ice along the way.

The storm will follow on the heels of a drenching rainstorm in the East into this weekend.

The new storm will be a delight for skiers and sleigh-riding kids, but will cause trouble on the roads and at the airports with slippery conditions, flight delays and cancellations likely -- more winter weather before the season officially arrives on Dec. 21.

The roots of the storm will produce pockets of snow over the ranges of the interior West, including the Colorado Rockies through Saturday.

A foot of fresh snow is forecast for the tops of the slopes in the central and southern Rockies as well as parts of the northern Sierra Nevada.

"The heaviest snow, on the order of 6-12 inches with an AccuWeather Local StormMax™ of 15 inches, is forecast for the Rockies in Colorado and northern New Mexico," AccuWeather Senior Meteorologist Brett Anderson said. The snow is forecast to pick up from Saturday night to Sunday over Colorado and northern New Mexico. Travelers will need to exercise caution and make sure their vehicle is properly equipped for snow along the Interstate 25 and 70 corridors as well as U.S. Routes 24, 40, 50 and 64. Denver can expect a few inches of snow from the storm, while Pueblo and Colorado Springs, Colorado, are likely to receive 3-6 inches with the potential for more.

The storm will turn eastward and cause snow to break out over the Plains of eastern Colorado, southern Nebraska, much of Kansas and western and central Missouri on Sunday. Cities such as Topeka and Wichita, Kansas, and Kansas City, Missouri, can expect road conditions to deteriorate.

On Sunday night into early Monday, the accumulating snow is forecast to spread rapidly from the middle Mississippi Valley to areas along and just north of the Ohio River in the Midwest. St. Louis, Indianapolis and Columbus, Ohio, are likely to turn snowy with slippery travel. Long stretches of the I-70, I-80 and I-90 corridors will be adversely affected by the storm in the eastern half of the nation. Shipping and freight interests may be able to save time and avoid aggravation by taking a more southern, cross-country route where possible.

"For parts of the Midwest, central Appalachians and Northeast, this storm will generally bring 1-6 inches with locally higher amounts possible," Anderson said.

Combination of rain, ice and snow to disrupt Northeast travel

Later Monday, the accumulating snow will reach the central Appalachians and is expected to bend northward toward the lower Great Lakes region as well. So not only can people in Pittsburgh, Cleveland and Buffalo, New York, expect accumulating snow from the storm, but some snow is in store for Chicago, Detroit and Toronto.

The storm may begin as snow or sleet in Philadelphia and New York City later Monday or Monday evening, but a fairly quick transition to rain is anticipated.

The storm is likely to have an icy component as well. This is expected to take shape from parts of the southern Plains and middle Mississippi Valley on Sunday and eventually extend to the central Appalachians Monday night to central New England by Tuesday. What the primary form of ice is, sleet or freezing rain, will determine the magnitude of the icy buildup and treacherous travel. Sleet would be the more navigable of the two and also not likely to lead to broken tree limbs and power outages.

A slight shift in the storm track, north or south, can have a significant impact on the primary form of precipitation. For example, a shift in the track by 50 miles could mean the difference between all rain versus moderate snow in Cincinnati. At this time, a combination of both is forecast for the city on the Ohio River.

Fast movement and minimal strength of the storm is likely to limit the duration of the snow, ice and rain to 12 hours or less. In some cases, precipitation may only last a few hours. It is for this reason that a blockbuster amount of snow is not foreseen.

Crews are likely to quickly deal with the snow, provided the roads are not clogged with vehicles. Check the latest AccuWeather forecast for specific timing on the storm for your location and points along your travel route.

Flooding rain is not expected to be a widespread problem, but it is possible a few storms become heavy and gusty over part of the lower Mississippi and Tennessee valleys.

Click play in the video above for more details.