Alexander Hamilton is believed to have written the only surviving account of a 1772 hurricane. 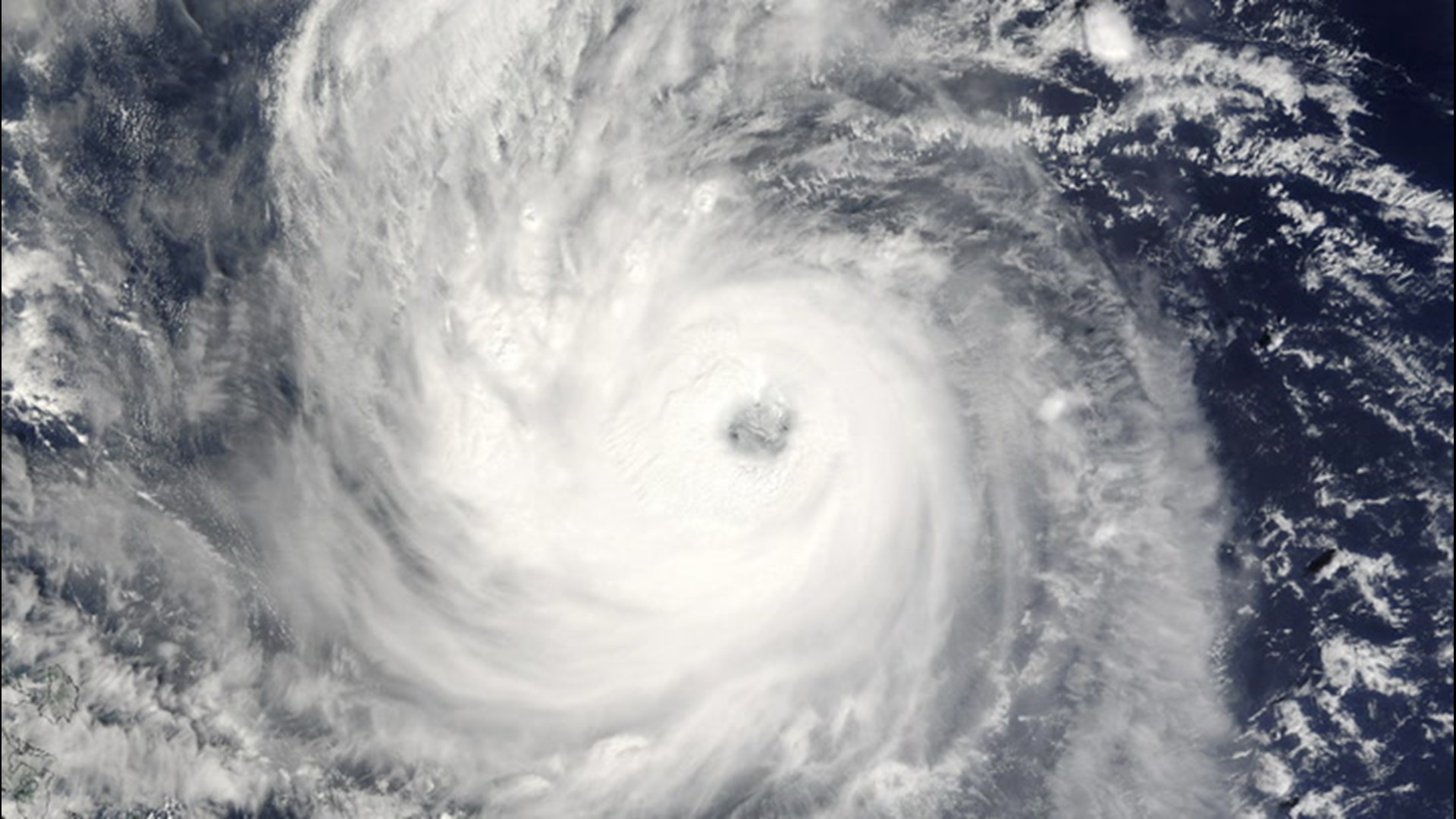 Nearly 250 years ago, a 17-year-old office clerk named Alexander Hamilton looked out across the devastation unleashed by a powerful hurricane on the small northeastern Caribbean island of St. Croix.

The buildings had been leveled, the people scared and shaken. Several people had lost their lives, others left without homes. For whatever reason, the smell of gunpowder had mixed in with the brackish rain that night.

"I take up my pen just to give you an imperfect account of one of the most dreadful hurricanes that memory or any records whatever can trace," he wrote in a letter to his father.

That imperfect account would be the only surviving account from the island, reprinted in the New York newspapers and echoed in plantation records from the then-Danish-governed island.

According to Hamilton, the island began feeling the storm around dusk, with the impacts continuing until 10 p.m. An "unexpected interval" lasting an hour followed. In this moment, the eye of the hurricane looked upon Hamilton.

Then in the 11th hour, the eye wall hit.

"The roaring of the sea and wind, fiery meteors flying about it in the air, the prodigious glare of almost perpetual lightning, the crash of the falling houses, and the ear-piercing shrieks of the distressed, were sufficient to strike astonishment into angels," the 17-year-old clerk wrote, describing the "total dissolution of nature" around the hurricane.

After the paragraph of describing the hurricane, Hamilton then launches into a passionate sermon in which he declared that surviving the storm had strengthened his faith and also called for mercy and compassion for those the storm had left in ruin.

"Hamilton did not know it, but he had just written his way out of poverty," Hamilton biographer Ron Chernow wrote.

It's possible that the young clerk had drawn inspiration from Presbyterian minister Hugh Knox, according to Chernow, who had, incidentally, been ordained by Aaron Burr Sr. -- father of the Aaron Burr that Hamilton would come to know and eventually be killed by -- at what today is known as Princeton University. Knox had opened his library to Hamilton, encouraging his intellectual growth. On the morning of Sept. 6, Chernow writes, Knox gave a sermon on the hurricane. Upon hearing that lecture, Hamilton took up his own pen.

The clergy were typically the first colonists to respond to hurricanes, Wayne Neely, a meteorologist and forecaster at the Department of Meteorology in Nassau, Bahamas, told AccuWeather over a Zoom video call. Neely, the author of The Greatest, Deadliest Hurricanes of the Caribbean and the Americas: The Stories Behind the Great Storms of the North Atlantic, uses records like Hamilton's along with colonial and plantation records to track the paths of historical hurricanes.

"The French, the Spanish, the Dutch, and all of them kept meticulous records of the hurricanes, especially the devastating ones," Neely said. The colonies typically had to report the state of the plantations as well as the state of affairs of the island to their respective governing mainland.

"One of the ways they named hurricanes was by the saint of the day, and the Spanish were mostly Roman Catholic, and to a lesser degree, the English [were also Roman Catholic]," Neely said.

After Christopher Columbus' arrival on the island, it was controlled by the English, Spanish, the Kingdom of Sicily, the French West India Company and then the Danish by 1733. At the time of the publication of Hamilton's work, St. Croix was governed by Danish Governor General Ulrich Wilhelm Roepstorff.

The National Oceanic and Atmospheric Administration's naming system for the Atlantic basin as we know it -- cycling through six lists of alphabetized names that alternate in gender -- started in 1979. Before then, hurricanes were typically named after women, saints or events.

"All those names were usually added later," AccuWeather Senior Meteorologist Elliot Abrams said in a Zoom video call, referring to the saint names. "As the storm was approaching, they didn't have names and people were often caught by surprise."

With no early designated name from the time to point directly to a specific tropical system, there is some disagreement among experts on the exact identity of the hurricane that struck St. Croix. Both meteorologists and historians rely on historical records rather than satellite images to track storms that brewed in the Atlantic over a century ago.

Neely attributes the "Hamilton Hurricane" to the Hurricane San Agustin of 1772, also referred to as the Bernard Roman's Gulf Coast Hurricane of 1772.

Records indicate the Hurricane San Agustin of 1772 hit not only St. Croix, but Saint Kitts and Nevis, Puerto Rico and Jamaica in the Caribbean before trekking into the Gulf of Mexico and making landfall near Mobile, Alabama, where it's documented to have sunk a ship. According to Neely, only six people from the ship's crew survived. The Hurricane San Agustin of 1772 took the lives of at least 280 people.

The Atlantic hurricane season of 1772 was a particularly active one, at least according to historical records, Neely said. Today meteorologists know that least three other storms developed into hurricanes, and one may have also hit the island within a few days of Hurricane San Agustin of 1772.

"At the same time that the Middle Gulf Coast was being raked by this severe hurricane [the Hurricane San Agustin of 1772], another blow of equal or greater strength struck the Island of St. Croix in the Virgin Islands close to Puerto Rico, and was felt in Hispaniola on the first of September," wrote David M. Ludlum, an American historian and meteorologist, in his book Early American Hurricanes 1492-1870, citing Knox as a source.

"There was another storm that moved through Jamaica and affected Cuba a couple of days, or I think a day, later, but it couldn't have been the same storm," AccuWeather Senior Vice President Evan Myers said. "They're too far separated from where they were, and the movement of the storm over Jamaica occurring virtually at the same time or 24 hours later, that would not have happened."

Now one of the U.S. Virgin Islands, St. Croix sits between Puerto Rico and the Lesser Antilles, which separate the Atlantic Ocean from the Caribbean Sea and are often caught in the crosshairs of developing tropical systems.

The dates attributed to storms through varying records have caused difficulties in pinpointing storms, Neely notes.

There were no satellites in the 1700s to track the paths of storms -- that technology wouldn't be developed for another 185 years or so -- to send back images of the storm or Hurricane Hunters to set out to investigate collect data like maximum sustained wind speed. There was no United States of America to fund the National Oceanic and Atmospheric Administration (NOAA) to provide information on developing hurricanes.

Specific details on the storm were also sparse, but Abrams notes that each hurricane leaves a slightly different footprint as to where it goes. Hamilton's hurricane is no different, leaving a trail of destruction in its wake.

"It was a devastating hurricane," Myers said over a Zoom video call. "It ruined most of the crops across what is now the Virgin Islands, tremendously impacted the port at St. Croix, caused a lot of damage to ships and the docks and so on. And the area was a big exporter of things like sugar, and it had a pretty significant impact on the economy for what was described as the next year or two."

However, an added layer in the difficulty of tracking historical hurricanes from colonial records comes from the fact that the word "hurricane" was relatively new to colonists.

The Spanish word "huracán," from which we get, "hurricane," was derived from the Taíno word "huraca'n" (uh-ra-kah-an), according to the Powhatan Museum. The Taíno people, an ancient indigenous people of the Caribbean, depicted these storms as angry goddesses, and in pottery, depicted a goddess as a head with her arms out in an "S" shape, much like the symbols used today to indicate a hurricane. According to the museum, "The main difference in interpretation between the original Taíno image and that of contemporary meteorologists was that the Taíno saw the 'eye' of the hurricane as the face of a woman."

The Taíno suspended long sea voyages during hurricane season, according to the museum.

The colonists often mistook in their records some hurricanes for severe weather or severe weather as hurricanes, Neely said. Hamilton's storm has been confirmed a hurricane, but the technology of the day hadn't quite captured the magnitude of it in terms of meteorological measurements.

Barometers had been invented, but there are no records of any readings from this hurricane to give historians and meteorologists a clue as to exactly what the maximum sustained wind speed might have been. It's impossible to determine the category of the storm, even from looking at the damage left behind.

"A great part of the buildings throughout the island are leveled to the ground, almost all the rest very much shattered," Hamilton wrote.

He continues, noting "several" people had died, families were seeking shelter and the sick exposed to the elements as the storm tore into and drenched homes.

"In a word, misery, in all its most hideous shapes, spread over the whole face of the country," Hamilton wrote.

"[The account] gives you [an] indication that it was a powerful storm," Neely said but added that it was "impossible" to assign a category to it just through the description of the damage and no recorded wind speed.

Neely described the homes built in the early colonial era as "substandard," the colonists replicating homes from Europe with three levels until the late 1770s. With the hurricanes knocking down the upper levels of the homes, the colonists had to rethink how tall they built homes.

"It really was not remarkable, other than the fact that it was a very intense storm system," Myers said of the storm. "What was remarkable is the impact that it had on history."

Chernow assumes Hamilton showed his writing on the hurricane to Knox, who persuaded him to publish it in the local newspaper that the minister was an editor for, the Royal Danish American Gazette. It appeared in print on Oct. 3. A preface accompanied the letter, written by Knox, explaining that the letter had fallen "by accident" into the hands of a gentleman who then decided to publish it for the public to read.

From there, the dominoes started to topple. The residents of the island were awed by the self-educated clerk's prose, and donors gathered their coins to send him to New York. Chernow theorizes that some of the donors may have been hoping he would become a doctor and return to the island. But the immigrant's writing took him elsewhere, raising a nation.

He was present at the Battle of Trenton, commanded an artillery unit, was on George Washington's staff and commanded a light infantry battalion at the Battle of Yorktown. Hamilton co-authored the Federalist Papers, a series of 85 papers arguing for the ratification of the U.S. Constitution. In 1789, Hamilton became the first Secretary of the Treasury of the United States of America, later creating the financial system and credit system used today.

"He never went back to St. Croix and spent his years in the colonies and then in the United States and had a profound effect on the future and the life we live today because of that hurricane," Myers said.

And the rest is history.