Businesses will no longer be allowed to distribute carryout plastic bags that you get at the register. 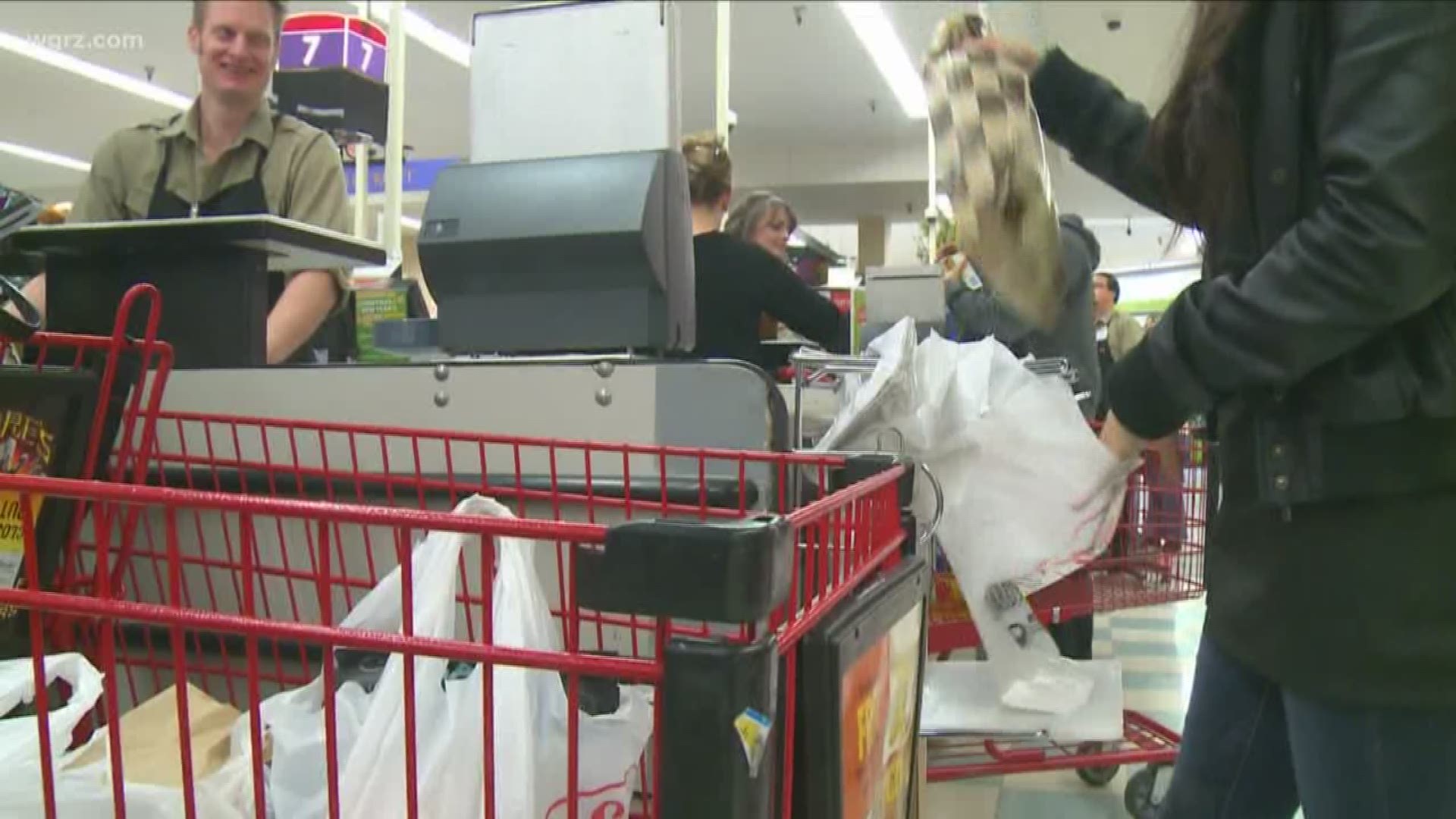 BUFFALO, N.Y. — New York State's plastic bag ban goes into effect on Sunday, but don't expect to see any penalties leveled for a lack of compliance, at least initially.

In a tweet on Friday , New York State Department of Environmental Conservation Commissioner Basil Seggos said, "During the initial period of the law, we will be focusing on education, not enforcement."

According to a Politico report, store owners would not be penalized for handing out single-use plastic bags until April 1.

That means, businesses will no longer be allowed to give out plastic bags that you get at the register.

But what if employers did that anyway?

The State Department of Environmental Conservation says if retailers violate the ban, they will get a warning for the first violation, a $250 fine for the second violation, and then a $500 fine for any violation after that in the same calendar year.

On Sunday, plastic bags that you get at the register should be no more.

Instead, you'll have the option of using reusable bags, paper bags with a 5-cent fee per bag, or maybe just carrying out your things yourself.

"Recently, I've been getting questions of, 'Does this only count at the grocery store?' But the bag ban will apply to other stores that pay New York state taxes, so if you're going to the mall, or the drug store, really any store that you would normally get a plastic bag," said Elizabeth Cute, the community engagement manager for Buffalo Niagara Waterkeeper.

According to the National Conference of State Legislatures, eight states including New York have banned plastic bags.

Stores such as Wegmans and Lexington Co-Op have already removed plastic from their stores. By Sunday, all other stores were told to comply with the change, including big box stores.

But some plastic bags are exempt, such as bags for prescription pills, bulk items and deli meat, as well as, newspaper bags, trash bags, and restaurant takeout bags.

"They've seen it as a benefit on their end they don't have to purchase that product anymore and really they're starting to embrace the environmental impact that they're making," Cute said.

That nickel would be split with 3 cents going to a state environmental fund and 2 cents staying with that local government.

Niagara County has said it won't impose a fee, and at this point, Erie County and the City of Buffalo have taken no action on whether to impose the fee.

Critics of New York's plastic bag ban say there could be a loophole businesses and manufacturers could expose, by using thicker plastic bags.

"If you put a threshold for thickness, you will see some retailers move beyond that threshold as a way to avoid the ban. The basic bottom line is that we need to reduce our usage of single-use bags period. You want to make sure that you're not just encouraging retailers to go to a thicker bag," Dr. Mildred Warner of Cornell University said.

Others have warned about a possible paper bag shortage.

"There is not sufficient manufacturing capacity here in North America to fulfill the marketplace need just here in New York when it comes to paper bags that's without a doubt. Certainly, you're going to have some stores especially the larger ones that are going to get first dibs at those," said Matt Seaholm, the executive director of the American Progressive Bag Alliance.

The state's goal is to shift people to reusable bags, reducing pollution.

"We're thinking by next year, 2021, that we'll start to see less and less plastic bag debris littering our creeks and our shorelines," Cute said.