Lawmakers seeks answers about a controversial clause recently added to the employment contract of the Water Authority's Executive Director. 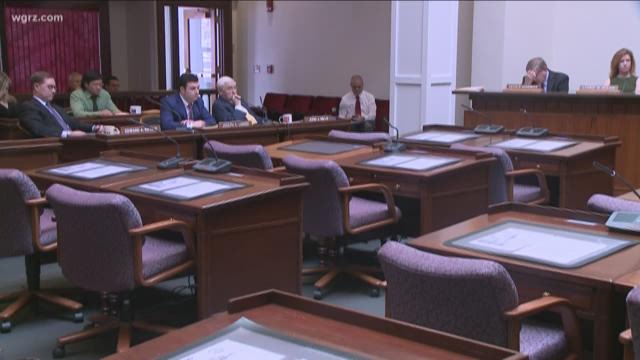 BUFFALO, NY – The sometimes thorny relationship between Erie County and the separate and independently run Erie County Water Authority took another turn on Thursday, when the Water Authority failed to send a representative to a committee meeting of the county legislature, to take questions that lawmakers are demanding answers to.

“We didn’t have time to adjust our schedule with only 48 hours’ notice,” explained Water Authority Board Chairman Robert Anderson, who noted that the Water Authority had its regularly scheduled meeting, as well as its committee meetings, on the same morning.

Burke told WGRZ-TV he was initially unaware of the time conflict, but was still upset that the Water Authority failed to send even a single representative.

“Their meetings started at 9:30. Ours started an hour and a half later, and they are only a few blocks away,” said Burke. “They can make excuses, but when something of this great importance comes up they can push a committee meeting back. They could have been here at 11 o'clock and they could have talked to us."

Burke said lawmakers wanted to ask about several items, including but not limited to a controversial clause in the employment contract of Water Authority Executive Director Earl Jann.

Many lawmakers on Thursday referred to it as a “golden parachute” designed to secure Jann in his post, as control of the Water Authority board flips from Republican to Democrat as a result of last November’s election, in which Democrats seized control of the county legislature.

The legislature appoints members of the Water Authority board, which then in turn appoint the Executive Director.

Jann’s contract was approved (but only recently disclosed) in early January just after the new Democrat majority in the legislature was seated.

Jann is a former pharmaceutical salesman, town supervisor, and longtime Republican donor, who was appointed as the agency’s Executive Director after serving a term on its governing board.

Jann was also praised on Thursday by the leader of unionized workers at the Water Authority, for his "caring about authority operations" and "recognizing the efforts of employees".

According to the Buffalo News, the clause would provide Jann a payment of up to $400,000 (through its ratepayers) if he is forced from his post by what is expected to be a Democrat controlled board, thereby protecting him from losing his $145,000 a year job.

“Had they (Water Authority representatives) been here, we would have asked them why they gave that contract and what were the details of it were," said Burke, who along with other legislators accused the Water Authority of being less than transparent in it decision, especially because the newspaper was only able to learn of it through the filing under the Freedom of Information Law.

“Stating that it's a golden parachute is misleading the public and it's not fair,” insisted Anderson, who declined to elaborate when asked how classifying the clause as such was unfair. “That’s all I’m gonna say," he huffed, before walking away from reporters.

How The Sausage is Made.

Hours later, on Thursday afternoon, another legislature committee began interviewing candidates seeking to fill a coming vacancy on the Water Authority board.

“We can’t continue this charade,” said longtime legislator Tom Loughran (D-5th District). "These commissioners are picked by the party chairmen.”

Loughran explained that- traditionally - legislators who hold the majority will dutifully vote for whatever candidate their party chairman tells them to, and conceded the past practices of his own party in that fashion are no different than what Republicans have done.

“We have a chance to change things right now,” he said. “To perpetuate this process is a mistake."

To that end, Loughran filed a resolution on Thursday which if adopted, would put a 90-day hold on any appointment to the Water Authority.

Loughran said this would not only allow for a more thorough vetting of the candidates, but also give the county time to appeal to New York State to reform the agency, or even get rid of it.

One of the few areas of power Legislator Burke believes the county has over the Water Authority, is to set the salaries of commissioners… which he says they'll perhaps consider reducing as they seek further reforms.

“I’m going to use every power I have to hold them accountable,” Burke said.