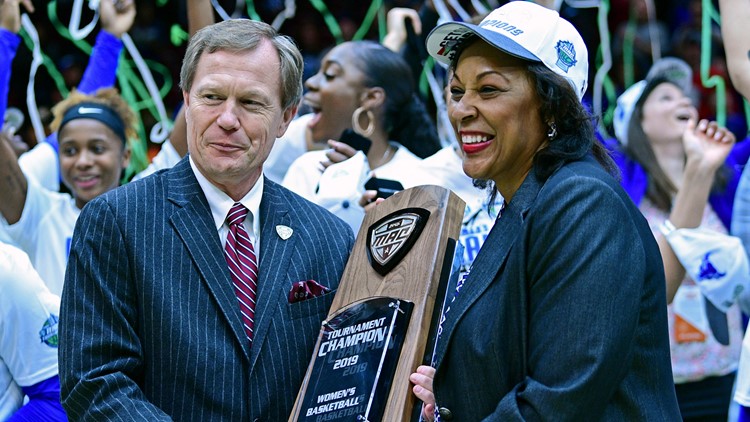 KENT, Ohio — University at Buffalo women's basketball head coach Felisha Legette-Jack became the winningest coach in program history with her 156th win in Buffalo as the Bulls defeated Kent State 57-44 at the MAC Center on Saturday. With the win the Bulls move to 13-5 on the year, 4-3 in MAC play.

Buffalo outscored Kent State 27-11 in the fourth quarter and 39-20 in the second half. Kent State's 46 points were the second-fewest allowed by the Bulls this season. Buffalo is now a perfect 48-0 over the last three seasons when holding opponents to 59 points or less.

Buffalo was led by freshman Dyaisha Fair who scored a game-high 17 points, including 13 in the fourth quarter, to go with eight rebounds and five assists. Junior Hanna Hall recorded her second straight double-figure scoring game with 12 points to go with a career-high nine rebounds and three assists. Sophomore Adebola Adeyeye just missed out on a double-double with nine points and nine rebounds while Marissa Hamilton and Theresa Onwuka added seven points each.

"This is a collective accomplishment of all of us working hand-in-hand for the glory of "we," said Legette-Jack. "I can't thank my coaches, players, support staff and administrators enough for the work they put in to get to this moment. All glory goes to God. We fight on!"

Offense was at a premium in the early going with neither team getting on the board until over two minutes into the game, but Buffalo would finally break through on a Hamilton three from the top of the key to spark a 7-3 run and take an early lead at the first media timeout. Onwuka would convert on a beautiful up and under move to extend the lead to 9-3 at the 3:59 mark. Kent State would respond with a 5-0 run to cut the lead to one, but the Bulls would maintain a narrow 10-8 lead at the end of the first quarter.

Megan Carter gave the Golden Flashes a spark to start the second quarter as she made a pair of three's to give Kent State a 14-10 lead at the 8:07 mark and they would lead 17-11 at the media timeout. Onwuka would knock down a turnaround jumper in the lane to give UB its first field goal of the quarter and cut the lead to 20-13 with 3:37 remaining but Kent State would extend their lead to as many as nine, taking advantage of another prolonged UB scoring drought, before Jessika Schiffer drained a corner three at the buzzer to cut the lead to 26-18 at the half.

Buffalo would extend the run to 7-0 early in the third quarter and cut the Kent State lead to 24-22 at the 6:50 mark but Kent State would answer with a 7-0 run of their own to go back up nine and force a Buffalo timeout. Adeyeye converted on an and-one to cut the lead to 31-25 at the 4:18 mark and later, Hamilton made a trio of free throws and Fair finished in transition to cut to Golden Flashes lead to 33-30 at the end of the third.

Hall spotted up in the corner and drilled a big three to tie the game at 33 early in the fourth quarter. Fair would knock down a free throw to give UB its first lead since the first quarter, 36-35, and later Adeyeye would power up through contact to put the Bulls up 38-35 with 5:50 remaining. After Kent State cut it back to three, Fair found Hall in the corner and she drilled a huge triple to give UB a 45-39 lead at the 3:37 mark and the Bulls would close the game on an 11-4 run, including a highlight-reel step-back three from Fair, to secure the victory.

The Bulls dominated the battle in the paint 28-12 and scored 17 points off 20 Golden Flashes turnovers.

Buffalo returns home on Wednesday, January 29, as they welcome Central Michigan to Alumni Arena for a 7pm contest.