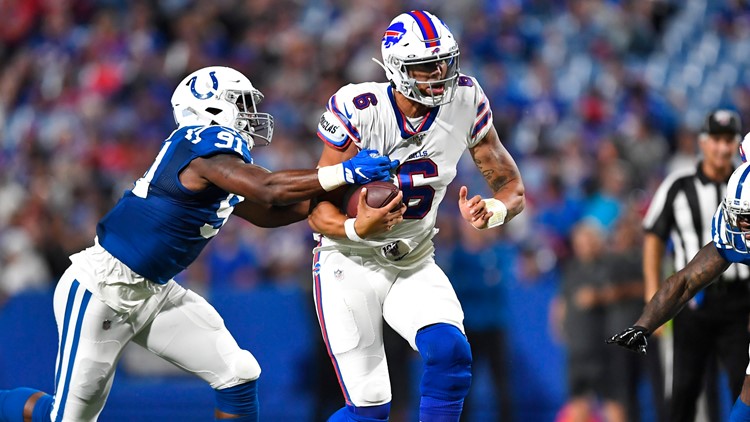 ORCHARD PARK, N.Y. — By the time the fourth quarter rolls around of a preseason game, it can get boring but two quarterbacks with ties to Western New York kept fans interested.

For the Bills, former University at Buffalo quarterback Tyree Jackson got his first taste of an NFL game. The rookie started the second half for the Bills and went 2-10 for 45 yards. He also rushed for five yards on six carries.

He's had an inconsistent training camp so he'll have to take advantage of the rest of the playing time he gets this preseason to convince the Bills to keep three quarterbacks.

If he doesn't land a spot on the 53-man roster, he could end up on the practice squad. His best play of the night came on a 24-yard completion to Isaiah McKenzie that set up a field goal.

On the other side, Western New York native and St. Joe's grad, Chad Kelly was playing in his hometown in front of his family and Hall of Fame uncle, Jim Kelly.

He's on his second team with the Colts after they signed him in the offseason. That comes after being cut by the Broncos following his arrest for criminal trespassing in October.

Kelly's highlight of the night was his 33-yard touchdown run in the fourth quarter. Kelly went 13-19 for 121 yards passing. He also rushed for 53 yards and that touchdown.