The Blues get ready to set the tone for Game 4

"Probably the biggest game of the year is tonight. We have to set the tone right away. Let them know we're coming, and we are pissed off." - Pat Maroon 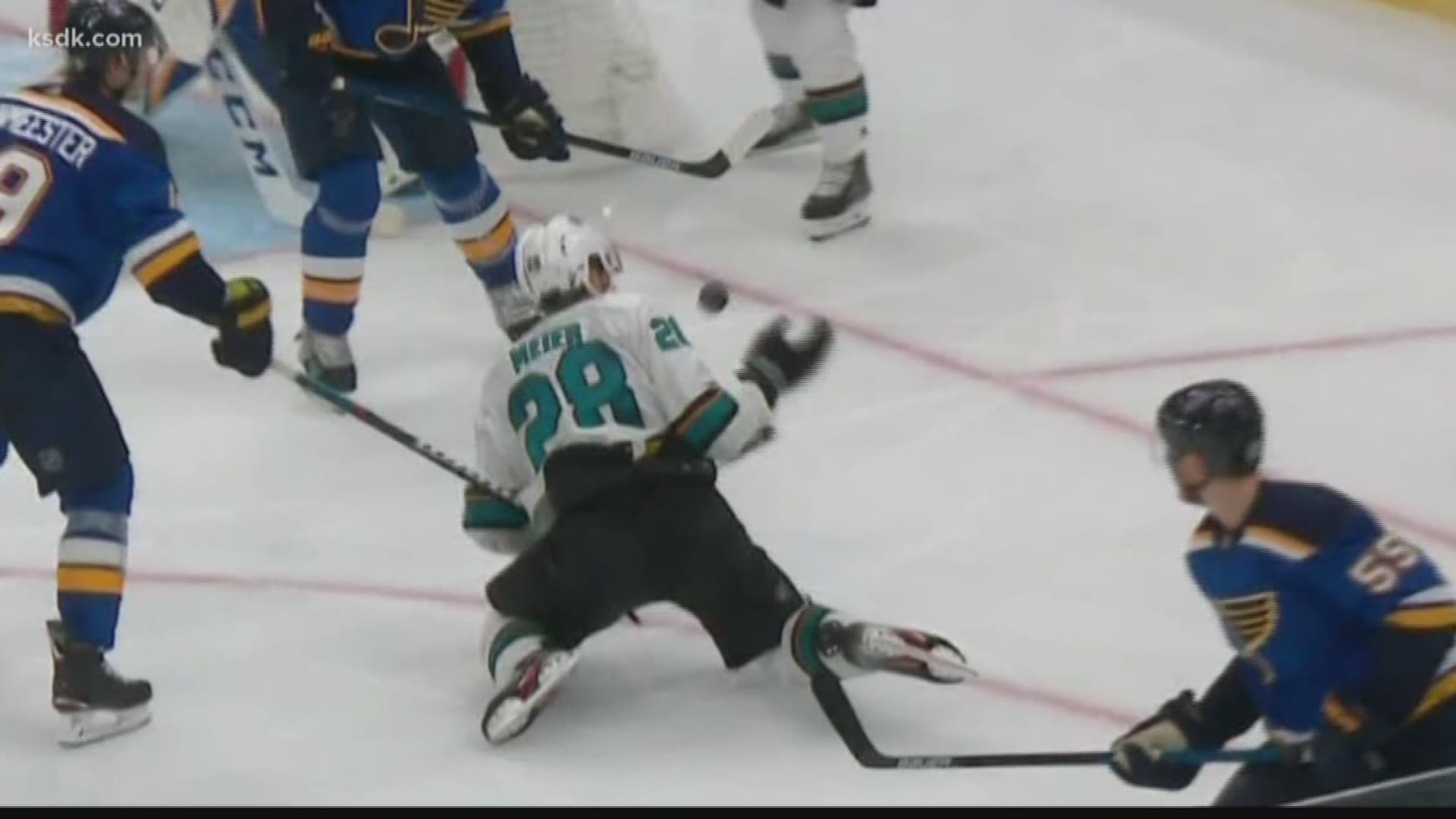 ST. LOUIS — Not that it was any sort of surprise, but the Blues will be without defenseman Vince Dunn and Carl Gunnarsson will step into his place in the lineup today when they host the San Jose Sharks in Game 4 of the Western Conference FInal (7 p.m.; NBCSN, KYKY 98.1-FM).

Dunn was injured in the first period of Wednesday's 5-4 overtime loss in Game 3 when he was struck in the mouth by a Brenden Dillon shot.

"He's home and he's just recovering," Blues interim coach Craig Berube said. "He's day-to-day right now, that's where it's at. Other than that, I really don't have much more information for you."

Gunnarsson, who sustained a lower-body injury in Game 7 of the second round series against Dallas, has been regularly skating the past few days and will step in and play in his first game this series with Robert Bortuzzo.

"It's not perfect, but did it against Winnipeg in the first round too," Gunnarsson said. "It is what it is, but I feel good though.

This is nothing new for the Blues, who have the depth on the blue line to replace a key component when one is missing.

Michael Del Zotto and Chris Butler, both veterans, are waiting in the wings.

"One guy out, another one steps up," Gunnarsson said. "Kind of had that depth on the back end and up front too. Kind of a deep team. It's good, right? You need it in the playoffs, you never know what's going to happen. Everyone's got to stay ready."

"We've got some good depth back there, experience too," Berube said. "Gunnarsson steps in, he's been in the league for a while, played in big games, big situations in the playoffs before, so it's a good thing to have, for sure."

"It sucks losing 'Dunny,'" Blued defenseman Joel Edmundson said. "It was a scary accident he had there. He's a great player on our team. He moves the puck well, he moves his feet well, creates lots of offensive opportunities, but we have depth here. We got Del Zotto at the deadline. Carl's jumping in tonight. We've got 'Delly', we've got 'Butsy'. We're deep. We're not worried about it and just to get Gunny back out there, he's really good in the d-zone, he likes to jump up in the play too. I'm looking forward to getting him back out there."

Game 3 is over, but is everyone over the bitterness of how it ended?

The Blues have handled the blown missed call on Timo Meier's hand pass that led to Erik Karlsson's OT goal well, at least on the surface they have. But the best way to channel that motivation for the Blues is to use the same mindset they've used since January: us against the world.

"We are excited. It's a new day," forward Pat Maroon said. "Probably the biggest game of the year is tonight. We have to set the tone right away. Let them know we're coming, and we are pissed off. We are in a really good situation. Find a way to win a hockey game. Go from there."

It's not the first bit of adversity the Blues have faced, and probably won't be the last. So moving on is the best.

"Absolutely. You have to," Edmundson said. "Nothing you can do about it now. It was a tough one to swallow, but it's a new day. Even if that call was made, we weren't sure if we were going to win that game anyway. We're staying positive in here, we knew it was going to be a long series. I thought we had a good game last game. We've just got to bring it tonight."

And that's why channeling their emotions in the right direction will be imperative tonight.

"It's tough," Gunnarsson said. "I thought we played well the whole game, but it's playoffs. That's what it is, right? You can't dwell on it. We've got to move on to tonight. You've got to try and put all your focus on that one.

"That's the way to do it. It doesn't matter how you lose it. It's going to be disappointing, and you can't do anything about it. Let it go, move on to the next one. I think everyone in here has done a pretty good job of that."

The Blues' fourth line of Alexander Steen, Ivan Barbashev and Oskar Sundqvist have not only been creating energy for themselves, but their teammates as well.

The line has scored in back-to-back games (Steen in Game 3, Sundqvist in Game 2), and that's the bonus, but the puck possession, forecheck and offensive zone time they're creating is exactly what the Blues have needed and what they must continue to do.

"It's real easy to play with them," Barbashev said. "I actually know what their next play is. It makes it so much easier. We just work hard every shift. We want to win and we want to be effective out there.

"Every time we play physical, and every time we have a chance to get some o-zone time, it's momentum. I feel like it's momentum for everyone, every other line. I feel like we've been doing a really good job of this. ... If we can change offensively, you just put the first guy out there, and it's amazing how it works.

When that line goes and has an effective shift, it really seems to trickle down to the remaining lines to go out and build off the momentum Barbashev, Steen and Sundqvist built.

"We feel as a group, not only forwards but defensemen as well, anyone can match up against anyone," Blues center Brayden Schenn said. "If you look at them right now, they're playing the right way. They're protecting, they're playing together. Not only playing good defense and being good in their own end of the ice, they're good 5-on-5 scoring big goals. As a team, having them play against anyone helps guys like me, Vladi, O'Reilly up front and we're going to need everyone moving forward."

"The line of Sundqvist, Barbashev and Steen have been really good since we put it together," he said. "They provide a lot of energy and they have good chemistry together and they just forecheck and work hard and they're giving us some secondary scoring, which is nice."

RELATED: The Hand of Fate
- - -
Blues forward Robert Thomas took the morning skate off for the second straight game but is expected to play.

Of course with the nature of the playoffs, there's some sort of ailment that's certainly in play, but that will not be disclosed at this time of year.

It's not enough to keep Thomas, who has one goal and four assists in 16 postseason games, out of the lineup.

RELATED: Get the home game experience with Game 5 watch party at Enterprise Center
- - -
The NHL announced on Thursday that Blues general manager Doug Armstrong has been named a finalist for the General Manager of the Year Award.

The General Manager of the Year is awarded annually to the “general manager who best excelled at his role during the regular season.”

Armstrong became the first GM in Blues history to capture the award back in 2012. During the 2018-19 regular season, the Blues had 99 points (45-28-9) and finished third in the Central Division. Armstrong began the season with an active summer, acquiring 2019 Selke and Lady Byng finalist Ryan O’Reilly from Buffalo and signing key free agents, including Tyler Bozak, David Perron and St. Louis native Maroon, who scored the game-winning goal in double overtime of Game 7 of the Western Conference Semi-Finals.

Armstrong also recalled goaltender Jordan Binnington from San Antonio of the American Hockey League on Jan. 7. Binnington went on to post a 24-5-1 record during the regular season and became a finalist for the Calder Trophy. On Nov. 19, Armstrong named 2019 Jack Adams finalist Craig Berube interim coach and the Blues went on to post a 38-19-6 mark to finish the regular season.

The Blues’ surge landed them in the postseason for the seventh time in Armstrong’s nine seasons, while the team has reached the Western Conference Final for the second time. The Blues share third overall with 403 regular-season wins during Armstrong’s tenure.

Former Blues president of hockey operations John Davidson stepped down from that same post with the Columbus Blue Jackets on Friday.

Davidson was named to his post with the Blues on June 30, 2006. He left the Blues after agreeing to a buyout of his contract on October 9, 2012, five months after Tom Stillman and his group bought the Blues and replaced by Armstrong. He was then named president of hockey operations for the Blue Jackets on October 24, 2012.

Martin Jones will start in goal; Aaron Dell will be the backup.

Here's what other people are reading:

The Blues are already focused on Game 4

It's a good day for online gamblers who put money on the Blues in Game 3.

Here's what other people are watching: