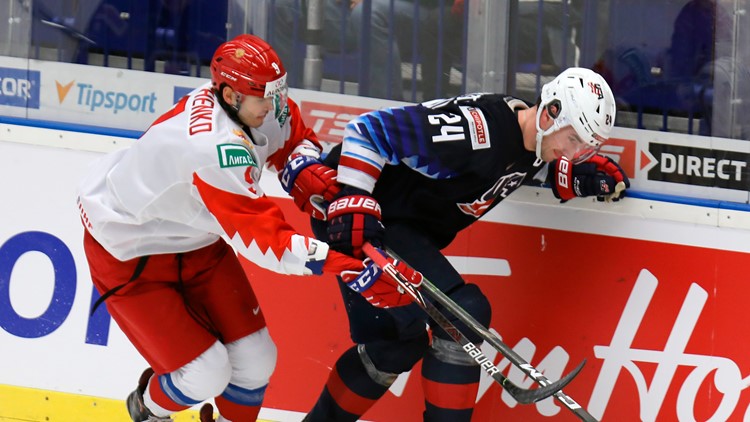 Photo by: AP
From left Kirill Marchenko of Russia and Mattias Samuelsson of the United States during the 2020 IIHF World Junior Ice Hockey Championships Group B match between USA and Russia in Ostrava, Czech Republic, on Sunday, December 29, 2019. (Petr Sznapka/CTK via AP)

The Sabres selected Samuelsson with the first pick of the second round in the 2018 NHL entry draft in Dallas. Mattias is the son of former NHLer Kjell Samuelsson. Kjell is now the Flyers director of player development.

Mattias recently completed his sophomore season at Western Michigan. One of Samuelsson's assets is one you can't teach, size, he's 6'4".

At Western Michigan Samuelsson played in 65 regular season games. He scored seven goals and had 19 assists for 26 points.

Samuelsson was a captain for the Broncos and for Team USA in this year's IIHF World Junior Championship. He was also part of Team USA's junior team that won a silver medal in 2019.

The Sabres have a surplus of defenseman in their organization. There seems to be a good chance that Samuelsson will start his Sabres career in the AHL with the Rochester Americans.