Leah Pasqualetti sets the national mark to beat at 14 feet. Now the girl whose coach jokingly refers to as the 'the quiet assassin' is creating a roar. 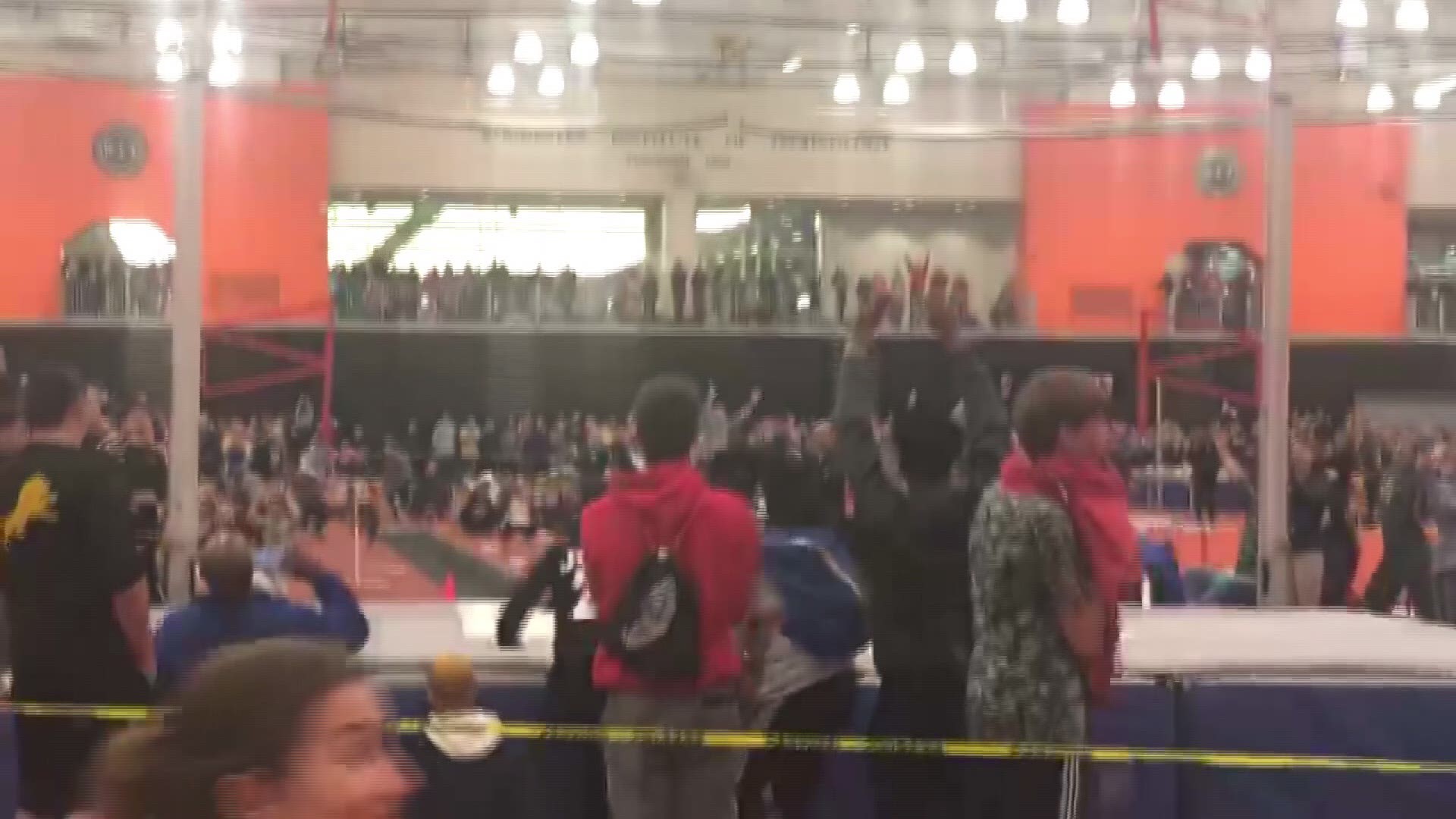 BUFFALO, N.Y. — Last Saturday a buzz went through the crowd as folks began to realize something special was about to take place on the infield of the indoor track at the Rochester Institute of Technology.

Now she was setting her sights higher.

When she cleared the bar set at 14 feet, the crowd erupted when it was announced that the vault had been the highest in the nation among high school girls this season.

“There's only ten girls in the history of the country that have jumped 14 feet so it was pretty historic," said Pasqualetti's pole vaulting coach, Mike Auble.

Among those tweeting their congratulations was Western New York native and Olympic gold medalist Jenn Suhr.

“She is a huge role model for me and I look up to her greatly,” Pasqualetti said in an interview with WGRZ-TV.

The 14-foot vault was nine inches higher than Leah had ever soared ever before in competition, and two and a half feet higher than when she placed first at the same event a year before.

“This year I have had the opportunity to focus a lot more on the vault," Pasqualetti said, when asked to what she attributes such remarkable improvement in one year.

Having already won last Saturday's event, it was left up to Leah whether she wanted to try and keep going.

She decided she would,

The significance of that height being that if she cleared it, she would set an all-time indoor record for New York State.

With each of the three tries she made the crowd grew.

They clapped in unison, slowly at first as she took her mark and prepared her approach.

Then, despite the announcer’s call for quiet, they continued clapping, increasing in speed to match each step Leah took as she began to make her run toward the bar.

She was unsuccessful on each of the three tries.

But there will another day.

“It’s been a goal of myself and my coaches to break the state record this year. I'm going to work as hard as I can to try and make it attainable," Pasqualetti said.

“I would never want to sell her short,” added her coach.

Welcome to the track shack

It’s not easy for pole vaulters to find places to train indoors.

Most high schools don’t have an indoor pits, and despite being located in one of Buffalo’s most affluent suburbs, Orchard Park is no exception to that rule.

For her practices, Leach travels 45 minutes away from her home two or three days a week to the Wyoming County village of Warsaw, home to the Warsaw Pole Vault Club.

In the yard out back, there are two pole vault runways, which also have lights for nighttime use.

However, this time of year they are often covered with ice and snow.

It means that outside of the occasional mid-winter thaw, they’re often not usable for full blown vaulting.

Thus, much of the training is done in what is affectionately known as the PVP “Track Shack.”

The track shack is a 22-by-24-foot room built onto the garage behind Auble’s home, and it has been described as among the most unique pole vault training facilities in the nation.

Inside these somewhat cramped quarters, athletes use a variety of apparatus that allow them to focus on different parts of the vault instead.

They include and assortment of ropes and rings, which hang from the ceiling, as well as a trapeze-like device that allows them to practice the inversion their bodies need to make as they soar aloft.

There are pulleys attached to the walls for use in strengthening the legs and upper body.

And there are of course poles, the points of which can be jammed into the corners of the room, and bent by the vaulters to practice that most crucial step of a successful vault, the take off.

It is a small space, but highly functional in its use and practicality.

“The magic that I felt the first time I walked in here … it never fades," Pasqualetti said. “It just seems like a place where you can attain your goals and your dreams."

If you’re willing to do the work.

"I've always said that one of Leah's super powers is that she can get her butt kicked in practice, and she always keeps coming back," Auble said.

Pole vaulting isn’t for every athlete, and success only comes to those who have certain physical attributes.

"It's not an event where you can say, ‘All right, you’re not good at anything else, why don’t you go pole vault?’ " Auble said. “You have to be fast, you have to be strong, you have to have gymnastic ability, and a little bit of a daredevil mentality. But really it’s about being tough. She’s one of the toughest kids I've ever known, and this is an event where you are gonna have failures so often that you gotta be able to rebound from that.”

Some of the equipment at his facility was designed over the years by Auble, who plans on phasing out the club after this year after having trained thousands of aspiring vaulters from throughout Western New York.

Leah, besides being among the last of the vaulters he will coach here, represents one the best. And he expects her to soar to greater even heights.

The sky is the limit

"She's without a doubt the best athlete I've ever coached, and she's one of the most outstanding young people I've ever known,” Auble said.

Next year Leah, a soft-spoken and reserved teenager whom her coach jokingly refers to as the “quiet assassin” hopes to continue vaulting in college while perusing a degree in engineering. However, she isn’t prepared at this time to say at this time where that might be.

RELATED: Who runs the world? This local girl