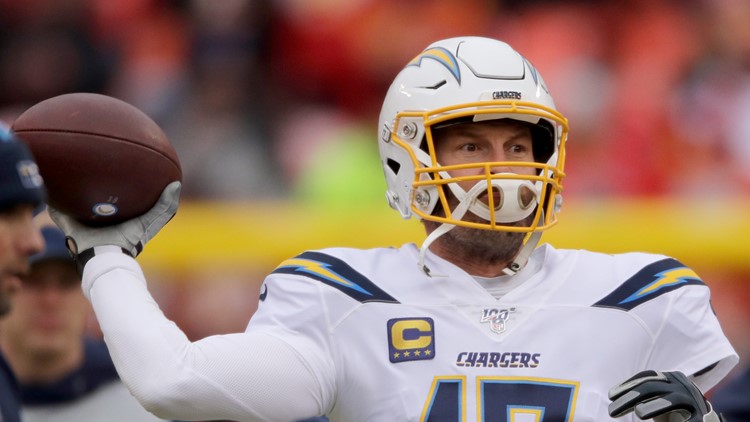 Photo by: AP
FILE - In this Sunday, Dec. 29, 2019 file photo,Los Angeles Chargers quarterback Philip Rivers (17) warms up before an NFL football game against the Kansas City Chiefs in Kansas City, Mo. Now that we know Philip Rivers won't be leading the Chargers into SoFi Stadium in September, the muddied waters of NFL quarterbacking have been cleared a bit. Just a little bit. Not knowing where Rivers might be headed if anywhere in 2020 doesn't simplify things at all. (AP Photo/Charlie Riedel, File)

NEW YORK — Philip Rivers has officially ended his 16-year tenure with the Chargers by signing the $25 million deal with the Indianapolis Colts he agreed to earlier this week.

The 38-year-old quarterback thinks he has plenty to offer even after one of his worst seasons. Rivers threw 23 touchdown passes, his lowest total since 2007, and 20 interceptions, matching the second-highest total of his career. But now, with a fresh start, a strong running game and one of the league's top offensive lines, Rivers insists he will prove the critics wrong this season.

The eight-time Pro Bowler said in a conference call Saturday that he knows he can still play at a high level.

In other NFL news:

Arizona running back Kenyan Drake has agreed to sign his one-year, $8.5 million tender to stay with the Cardinals. The Cardinals placed the transition tag on Drake earlier this week. That meant he could negotiate a deal elsewhere, but Arizona had the right to match the offer. Drake's agency announced today that he would sign his tender. The 26-year-old Drake went to the Cardinals in a mid-season trade from the Miami Dolphins. He was productive in his eight games, running for 643 yards and eight touchdowns, including a four-touchdown game against the Cleveland Browns in Week 15.

The New York Jets have released cornerback Darryl Roberts after four seasons with the team as a sometime starter and valuable backup. The move Saturday saves the Jets $6 million on the salary cap for the upcoming season. New York has now cut both of last year's starters at cornerback after releasing Trumaine Johnson earlier in the week. Agent Brett Tessler also announced the Jets agreed to terms with veteran offensive lineman Josh Andrews. A person with direct knowledge of the deal said New York and former Los Angeles Rams safety Marqui Christian have also agreed to terms on a one-year deal worth up to $2 million.