A local wildlife center has found a unique way to enrich lives and help raise money for animal care at the same time. 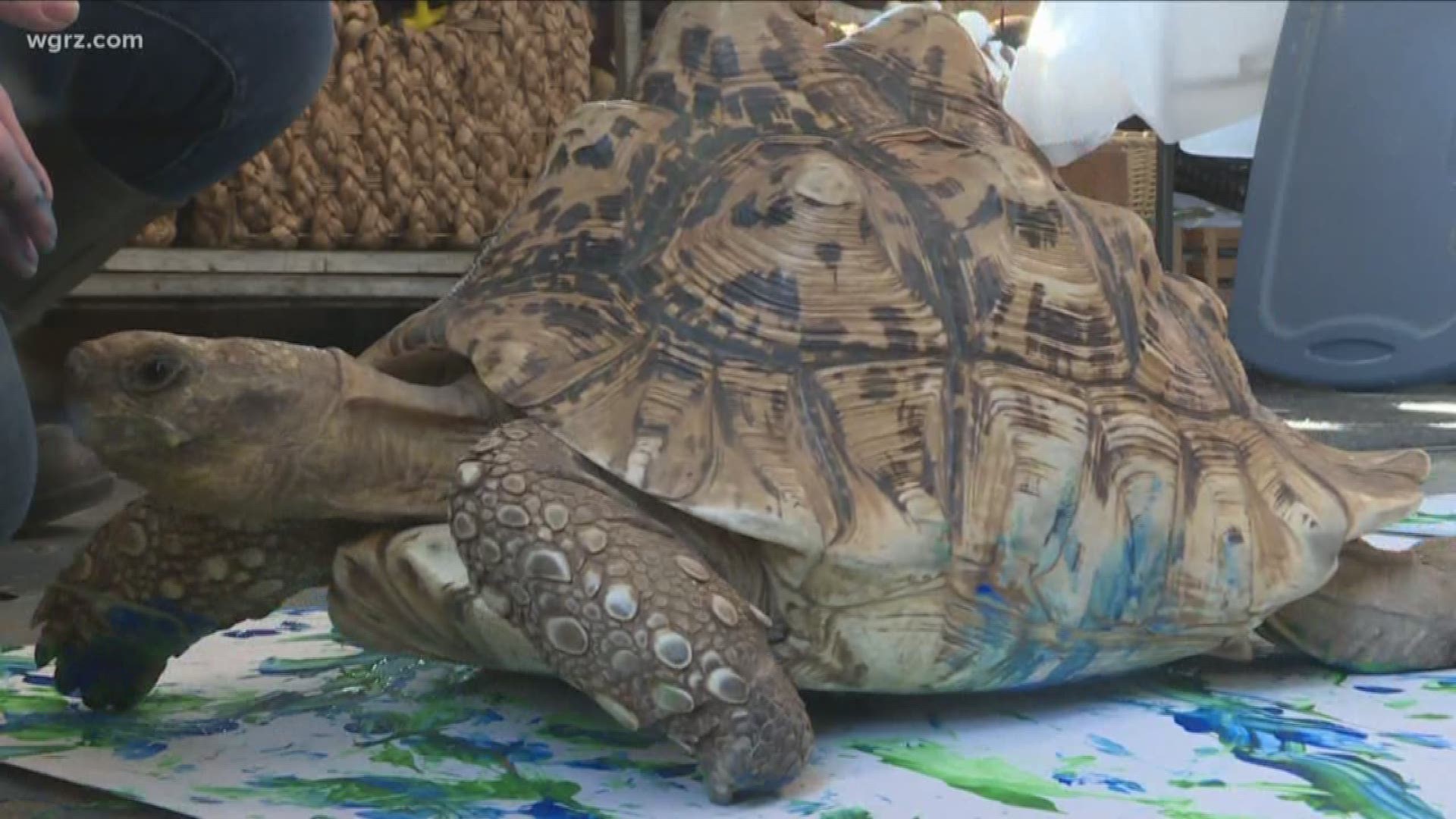 EAST AURORA, N.Y. — There are many challenges for those who care for sick or injured wildlife.

Wildlife rehabilitators like Hawk Creek in East Aurora nurse scores of ailing animals to health each year, releasing many back into the wild. Some cannot be released, spending the rest of their lives in the hands of their human caretakers who must provide everything they need to have healthy and happy lives.

That care goes far beyond just food and shelter.

Enrichment is critical and can take various forms, including a quite unexpected activity: painting.

"It's just coming up with novel ways to keep them busy, and so the concept of doing artwork with some of them, we started experimenting with that," said Hawk Creek's Curator and Education Director Tanya Lowe. "And I'll be honest, it's just as much for us to do it as it is for the animals as well."

The caretakers begin by using nontoxic, washable paint spread out on poster board. Some of the animal artists, like Morla the leopard tortoise, simply stroll around to create their art. Others, like Captain the opossum, get some treats to inspire their creativity.

"For the tortoise it's more the visual, moving around, feeling it," Lowe said. "For Captain a lot of it is really just feeling it and all the smells because he's very scent oriented. He doesn't have very good eyesight, he actually has an undeveloped eye. Opossums in general don't have good eyesight, so the colors for him don't seem to be such a big thing, but he is constantly sniffing and really feeling that paint between his toes."

Credit: Terry Belke
The animal's paintings are being sold to the public to help raise funds for the center.

"They're exploring with their hands, nose whatever it is, that's their main sense," said Tiffany Cimino, Hawk Creek's conservation and public relations director. "This kind of brings out everything; it brings in sight, smell, sensory, everything you can think of. It's a great project."

Lowe says that the animals return this gift of care and love by becoming educational ambassadors.

"Many of them travel off site for programs, some are strictly on site, it depends on the animal," she said. "That's what their mission in life is, they are teachers, they are teaching young and old alike about wildlife in our backyard and across the globe."

These animal masterworks are sold by the center to help raise funds, and Lowe says they've been a huge hit with the public.

"This is something that started as the staff just wanting to do some more enrichment for our animals," Lowe said. "Its turned into something very enriching for us, you know, who are we going to try painting with today? And its become something that's been enriching for our extended Hawk Creek family as well, they've been having a fun time seeing what animals are coming up next and what paintings are coming up next."

Credit: Terry Belke
The act of painting is a unique way to enrich the animals lives, and the results are beautiful.

RELATED: 2 the Outdoors: A celebration of birds

RELATED: 2 the Outdoors: The benefits of walking in the woods