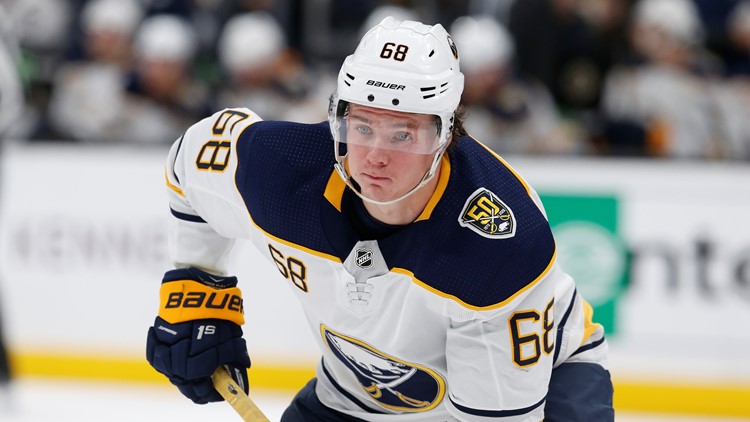 BUFFALO, N.Y. — The biggest setback of Victor Olofsson's career might be just about over.

He's been out since January 2 with a high-ankle sprain but returned to practice on Saturday morning. He then skated again with the team Tuesday morning and at practice Wednesday afternoon.

In addition to Olofsson, the positive news continued as Kyle Okposo is also making progress towards returning. He skated with the team Tuesday morning then again Wednesday afternoon. Okposo has been dealing with an upper-body injury since January 30.

Head coach Ralph Krueger said both Olofsson and Okposo could return to the lineup as early as Thursday night as the Sabres host Columbus.

"Victor Olofsson and Kyle Okposo both show good signs here today," Krueger said. "We're gonna assess post-practice and take a final look in the morning, but it looks like they're an option already for tomorrow but we'll make that final call again tomorrow."

"It's close," Olofsson said. "I felt pretty good today and we'll see how I react tomorrow so it's hard to say but we'll see tomorrow how I feel and we'll decide then."

Olofsson is eager to get back in a game but doesn't want to rush anything if he's not 100 percent ready.

"I'm looking forward to it. I'm real excited but at the same time I've gotta be patient and feel like I'm ready so we'll see. I'm getting closer," Olofsson said.

Even with the setback, Olofsson is still having a Calder Trophy type season. He's still second among NHL rookies with 16 goals and 35 points in 42 games.

"What we like is just how good the rehab's worked here and how fit they feel within a couple of days," Krueger said. "I've seen this multiple times this year so it's just a compliment to the work that's being done in the preparation for these players' returning and we just like where they're at right now and it's looking good."