Fans return to KeyBank Center, but Sabres not serving up wins at home

The Sabres have only won three games at KeyBank Center this season. 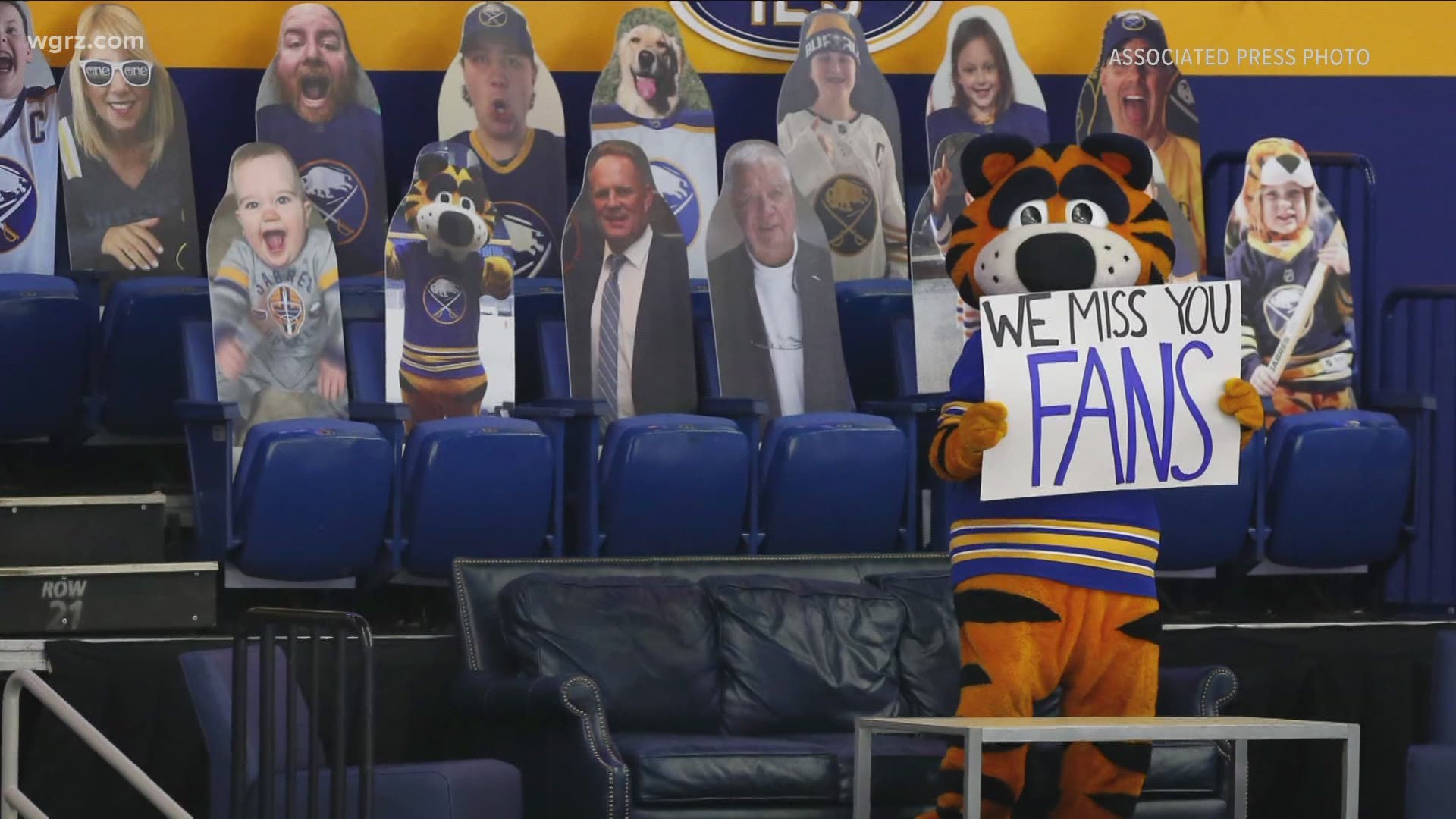 BUFFALO, N.Y. — KeyBank Center will have fans back in the building on Saturday, in the first of four games Buffalo is allowing the Sabres faithful to come support their team against the New York Rangers.

Unfortunately for the fans, the Sabres have struggled at home all season, only winning three games so far at KeyBank.

The Sabres are busy coming off of a 3-2 overtime loss to the Rangers on Thursday night, with Buffalo coming off back-to-back games. The Sabres snapped an 18-game winless streak, beating the Philadelphia Flyers 6-1 on Wednesday night.

Buffalo had a chance at a second straight win against New York, trailing 2-1, when Tage Thompson tied it up with a goal with four seconds remaining, sending Thursday night's game to overtime before Mika Zibanejad scored the game winner with overtime running down.

The Sabres lead 1-0 after the first period off of a goal from Rasmus Asplund just 2:06 in the game, but the Rangers tied it in the second and went ahead 2-1 in the third, with Colin Blackwell and Filip Chytil getting behind Dustin Tokarski.

Dustin Tokarski made a career-high 44 saves tonight, including 20 in only the third period.

Despite the OT loss, our goalie was an absolute beast tonight. Game recap: https://t.co/2PKLHeVJhH pic.twitter.com/PSKlRzaCBu

The Sabres were showing fatigue from there back-to-back games and much more physical practices run by interim coach Don Granato, 15 days after he took over as the interim head coach.

“Fatigue is a factor certainly when you play back-to-back and the other team didn’t. There’s not way around it. The other team is going to be better rested, better prepared... When we spoke to the team after the second period, that was the number one message: 'What you’re battling, fellas, is fatigue. All the signs show it. You know it, we know it, let’s talk about the elephant in the room here,'" Granato said after Thursday night's game.

"A lot of it, we had to change our mindset and just find a way to surge and push through, get back to playing our game because we didn’t in the second period. We played with a lot of hesitation, no puck pressure, and we chased it then. We had to understand that it’s going to be a lot harder if we don’t push.”

Granato said earlier in the week, after Wednesday's morning skate, they've felt the energy from the fans in recent road games, in Boston and in Pittsburgh. Although they're excited to have the fans added back into the KeyBank atmosphere and want to give them something to be excited about in return - a Sabres win - they have to stick with the process of longer and harder practices, which might leave Buffalo fatigued during the games.

"Nobody wants to see wins more than players because they're taking the heat. The win's going to be the byproduct of doing things the right way. The process of it is gaining confidence. What are the right things that we do as a team, collectively? We're identifying better with that," Granato said.

"The stronger that becomes, wins follow... We want to try to get to a point where we feel like we win any night out and win with consistency. I'm not giving these guys extra rest so we can hope to win the next game and then we're right back to where we were. We're trying to push them harder to develop harder. We know we have to get better.  The focus has to be on that, and we have to trust that wins will follow and be a byproduct of that.... If you turn to just chasing one win, just for the sake of one win, and sacrificing becoming better, I don't believe in that... We have to stay on that path no matter what happens."

Mark your calendars! We are welcoming fans back to the following games this season: