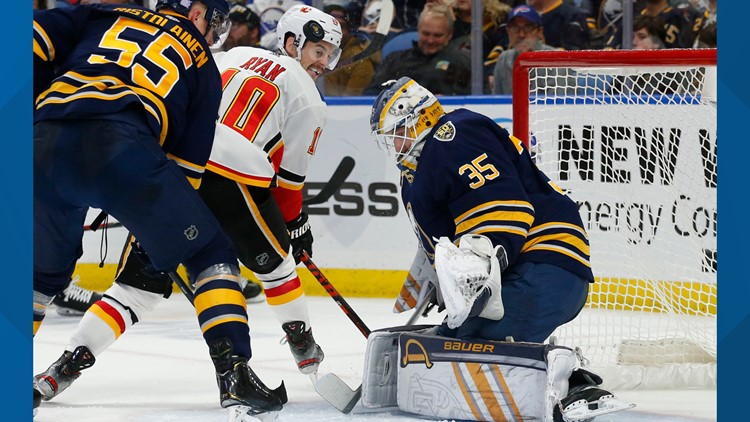 BUFFALO, N.Y. — Elias Lindholm scored on a wraparound 1:17 into overtime to lead the Calgary Flames to a 3-2 win over the Buffalo Sabres on Wednesday night.

Matthew Tkachuk had a goal and set up the winner in a game played in front of a backdrop of uncertainty and questions regarding allegations made against Flames coach Bill Peters' past dealings with players before he arrived in Calgary.

TJ Brodie also had a goal and assist, and David Rittich stopped 34 shots as Calgary improved to 2-0-1 in its past three, and with associate coach Geoff Ward behind the bench.

Peters has been accused of using racists slurs against a Nigerian-born player 10 years ago while the two were in the minors. And Hurricanes coach Rod Brind'Amour on Wednesday backed another former player's allegation that Peters kicked and punched players on the bench during his previous four years coaching Carolina.

During the third period, Peters acknowledged using offensive language in dealing with forward Akim Aliu in writing a letter of apology addressed to general manager Brad Treliving, and obtained by TSN, a Canadian sports cable network.

Without specifically referencing the words he used, Peters writes his comments to Akim Aliu were the source of both anger and disappointment in the letter posted Twitter. He adds the incident was made in a “moment of frustration and does not reflect my personal values.”

Peters says he regretted the incident and apologizes to anyone negatively affected by it.

The letter was released while Peters is away from the team while the Flames and the NHL conduct an investigation into the matter.

Jimmy Vesey and Victor Olofsson scored for the Sabres, who dropped to 2-8-3 in their past 13 — and after getting off to a 9-2-1 start to the season. Linus Ullmark made 26 saves.

The game was decided when Tkachuk beat a Sabres defender to the puck deep in Buffalo’s zone and slid a pass behind the net to Lindholm.

Lindholm came out untouched at the right post and circled atop the crease before scoring inside the opposite post.

Brodie’s goal with 2:55 left in the opening period came in his second game two weeks after experiencing a frightening moment in practice when he began convulsing after falling to the ice. A series of neurological tests came back negative and the 29-year-old play-making defenseman was cleared to return in a 3-2 loss at Pittsburgh on Monday.

Vesey scored a short-handed goal and Olofsson provided the Sabres a 2-1 lead 1:55 into the third period, when he ripped a shot from the right circle off the far post.

Tkachuk, however, tied it a little over three minutes later by converting a rebound from the right circle.

Despite the win, the Flames continued their offensive struggles in scoring two or fewer goals in regulation for the ninth consecutive game. It's a stretch in which Calgary has been out-scored 30-12 and shut out three times.

NOTES: Sabres D Rasmus Dahlin is out indefinitely after sustaining a concussion in being elbowed in the face by Tampa Bay's Erik Cernak in 5-2 loss Monday. ... Calgary played its 17th road game, tying Minnesota for the most so far this season. ... Johansson returned after missing seven games with an upper body injury.

RELATED: Calgary Flames head coach won't be behind the bench when the Flames take on the Buffalo Sabres