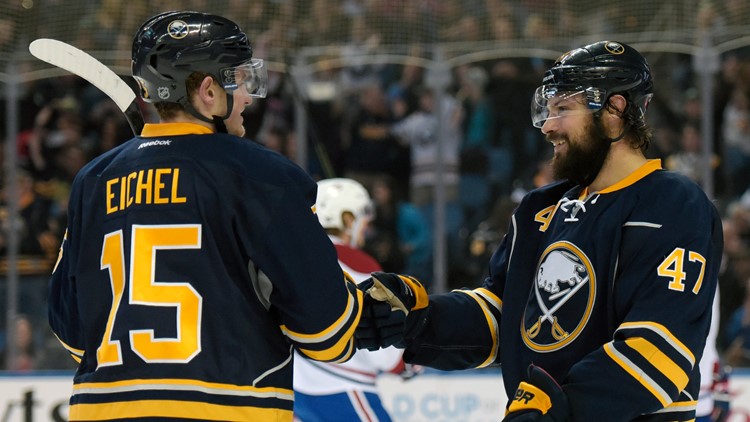 Eichel reflects on his friendship with Bogosian, who cleared waivers

BUFFALO, N.Y. — Zach Bogosian's career with the Sabres most likely came to an end Saturday as he cleared waivers and was assigned to Rochester.

It's unclear if he'll report to the Amerks or not, but this comes after he was put on waivers Friday.

And even though his production on the ice was declining, his presence in the locker room was not. He made an impact on some guys, especially Jack Eichel, who stopped just short of getting emotional talking about their friendship Saturday after practice.

"He'll be a lifelong friend of mine, and he's somebody that, you know there's not really many people in the world that I'm closer with. You know we have that weird, special relationship so that's it, I don't want to get emotional here talking about him, but that's all I got," Eichel said.

Although, that's not all he wanted to say as he reflected even more on how much Bogosian meant to him.

"He's honestly someone you enjoy coming to the rink and seeing everyday. He brings a tremendous energy, and he's somebody that I went to for just about everything in my life, and he's been there since I was a rookie. So we might not be seeing each other in the rink everyday, which sucks, but I'll see him all summer, and he's a lifelong friend, and probably even closer than a friend," Eichel said.

Bogosian was a healthy scratch for 17 out of the last 26 games, and he reportedly requested a trade.

Even though that didn't happen, the move doesn't come as a surprise the team is parting ways with him.

He also dealt with a number of injuries over the years, with the latest being hip surgery he had this past offseason.

"He's had a tough road here with dealing with the rehabs and trying to get himself back to what he feels is his best, and when you have surgeries like the ones that he's had, it doesn't happen overnight. It's something that takes a while, and you know he's been in here early every single day working out, trying to get himself back, trying to make himself feel like he did before, and I think all the guys on the team recognize that," Eichel said.