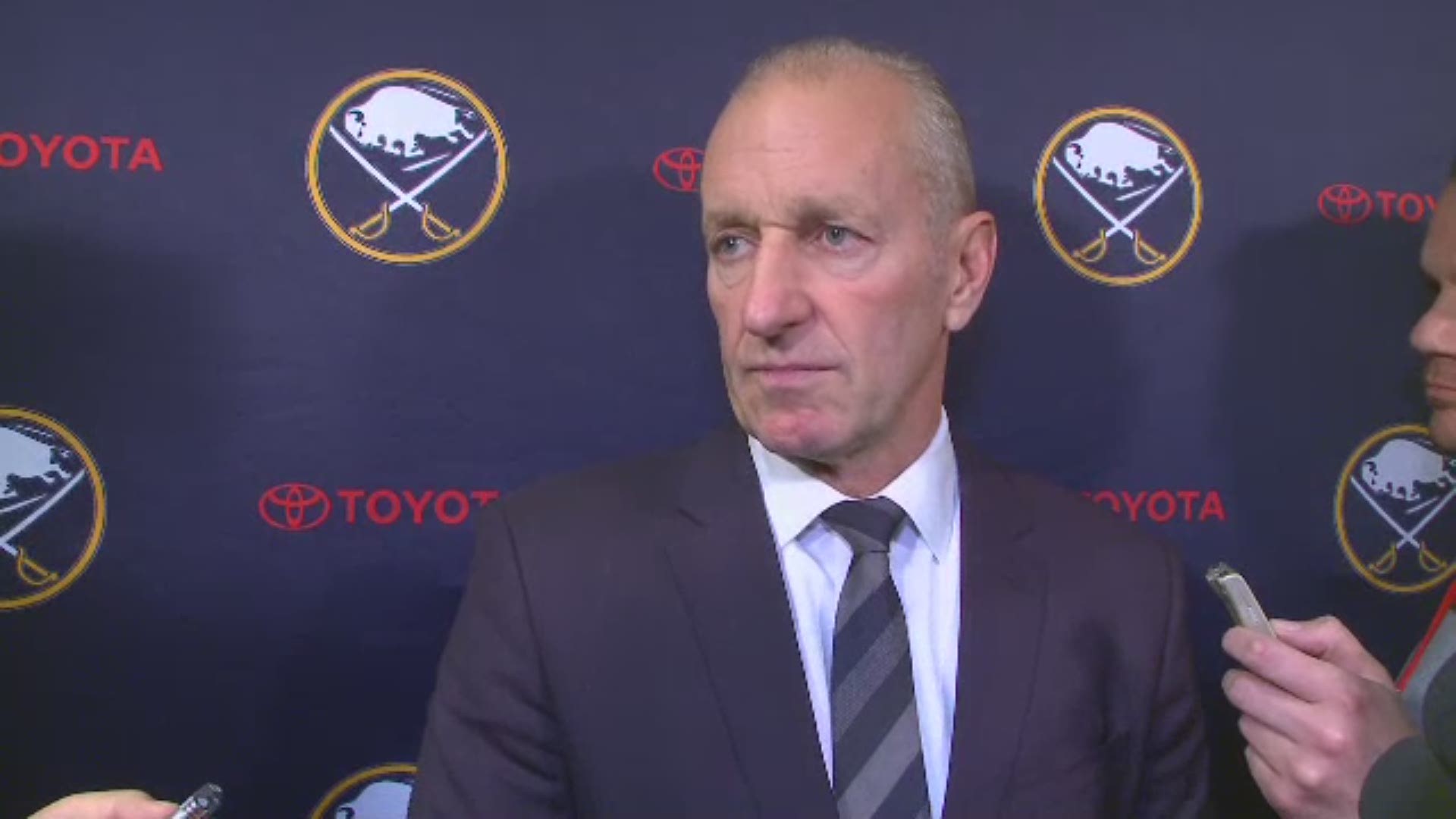 PITTSBURGH — Conor Sheary scored twice against his old team and Carter Hutton stopped 26 shots in the Buffalo Sabres’ 3-1 victory over the Pittsburgh Penguins on Thursday night in the opener for both teams.

Rasmus Dahlin also scored to help Buffalo give Ralph Krueger a victory in his Sabres coaching debut. Buffalo beat Pittsburgh in regulation for the first time since April 23, 2013.

Krueger last coached in the NHL in 2012-13 when the Edmonton Oilers had 19 wins during a shortened 48-game regular season. Buffalo went 33-39-10 under Phil Housley last season.

Sheary, who won two Stanley Cups with the Penguins, has four goals and six points in four games against his former team. He scored two goals twice last season, including a March 1 home game against Pittsburgh.

Buffalo’s last game in Pittsburgh was an overtime win in November 2018 when the Sabres snapped an eight-game winless streak in Pittsburgh. The victory Thursday gave Buffalo consecutive road wins in Pittsburgh for the first time since 2012-13.

Evgeni Malkin scored on the power play for Pittsburgh. Matt Murray made 38 saves.

Pittsburgh had 15 wins in its past 18 games against the Sabres, dating to Oct. 5, 2013. The Penguins also previously won eight of nine home games against the Sabres and 11 of 15 since PPG Paints Arena opened in 2010-11. Pittsburgh earned an NHL-best 13th-straight playoff berth last season, but was swept from the opening round of the playoffs by the New York Islanders.

The Penguins didn’t make sweeping changes to the roster. Instead, they brought in wingers Alex Galchenyuk and Dominik Kahun, through trades with Arizona and Chicago, in addition to free-agent pickup Brandon Tanev, as head coach Mike Sullivan seeks a brand of intelligent and responsible hockey that demands responsibility at both ends of the ice.

The Sabres took control early with 10 of the game’s first 12 shots and the opening goal.

Sheary started the scoring at 5:23 following a Penguins’ turnover at their own blueline. He took a pass from Casey Mittelstadt and beat Murray to the blocker side from in close.

Malkin tied it at 5:50 of the second period with a power-play goal. He beat a screened Hutton with a wrist shot from the left faceoff dot. Malkin has points in 10 straight games against Buffalo.

Sheary gave Buffalo a 2-1 lead with a power-play goal at 14:03 when he converted a rebound from the slot past Murray.

The Sabres took a 3-1 lead in the final minute of the second period when Dahlin flipped a shot over Murray’s glove off the rush.

NOTES: Sidney Crosby had an assist to tie Larry Murphy for 42nd on the NHL’s career points list with 1,217. Crosby has a seven-game point streak against Buffalo and one point in 36 of 40 career games against the Sabres. ... Buffalo’s Victor Olofsson and Henri Jokiharju were recalled from Rochester of the American Hockey League. ... Sabres’ D Colin Miller recorded his 100th NHL point. ... Buffalo’s last opener in Pittsburgh was the team’s first game, a 2-1 victory on Oct. 10, 1970.