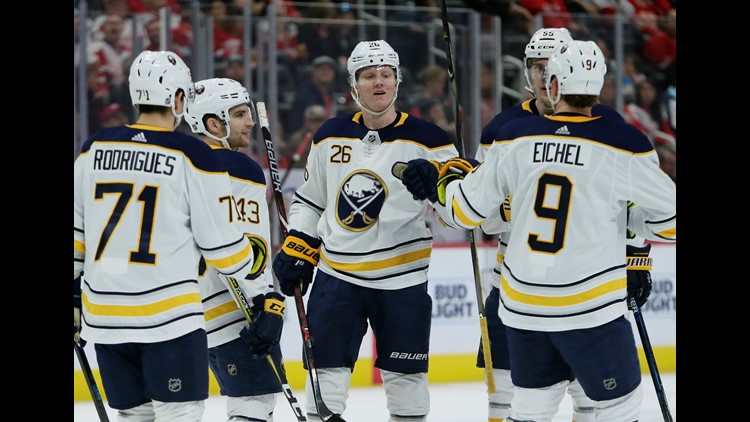 Photo by: AP
Buffalo Sabres defenseman Rasmus Dahlin (26), of Sweden, celebrates with teammates after scoring against the Detroit Red Wings during the first period of an NHL hockey game Saturday, April 6, 2019, in Detroit. (AP Photo/Duane Burleson)

Players report for testing and physicals on Thursday, September 12. Two groups, the gold and the blue, hit the ice the following morning for separate sessions.

Three of the team's training camp sessions are open to the public.

The Sabres will play six preseason games. The first is Monday, September 16 against the Pittsburgh Penguins. That game will be played at Penn State.

The Sabres also announced their rosters for the Prospects Challenge which runs from Friday September 6 through Monday the 9th of September.

The Bruins, Devils and Penguins will join the Sabres for the Prospects Challenge. Each team will play three games and every game will be played at HarborCenter.