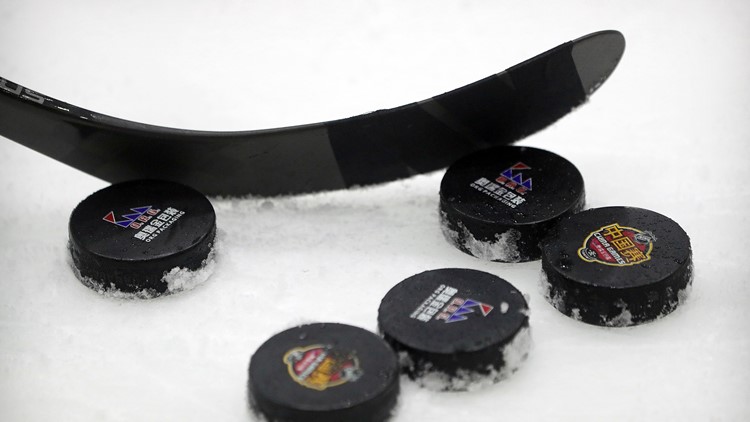 Photo by: AP
A Boston Bruins player pushes pucks with the logo for the NHL China Games during a team practice in Beijing, China, Monday, Sept. 17, 2018. The Bruins faced off against the Calgary Flames in southern Chinese city of Shenzhen in the 2018 NHL China Games on Saturday and will play the Flames again in Beijing on Wednesday. (AP Photo/Mark Schiefelbein)

NHL still reluctant to shut down game for Olympics

NEW YORK — The NHL remains reluctant to allow players to compete at the 2022 Winter Games in Beijing despite new assurances from Olympic officials to lift various major stumbling blocks.

NHL deputy commissioner Bill Daly significantly tamped down hopes of the world’s best players returning to the Olympics for the first time since 2014, referring to recent talks as being “very preliminary.” Daly also raised another concern by suggesting the issue of Olympic participation might be resolved easier if it were tied to ongoing negotiations to extend the league’s collective bargaining agreement.

NHLPA executive director Don Fehr said he hoped the NHL wasn’t moving the goalposts on the issue of Olympic participation, with the Beijing Games taking place before the current CBA expires.

RELATED: 200 days out: Checking in on WNY's Olympic hopefuls

RELATED: A panda is the mascot for the 2022 Beijing Winter Olympics