The group says its analysis shows the Buffalo site south of the 190 would be more feasible than Pegula Sports and Entertainment has claimed. 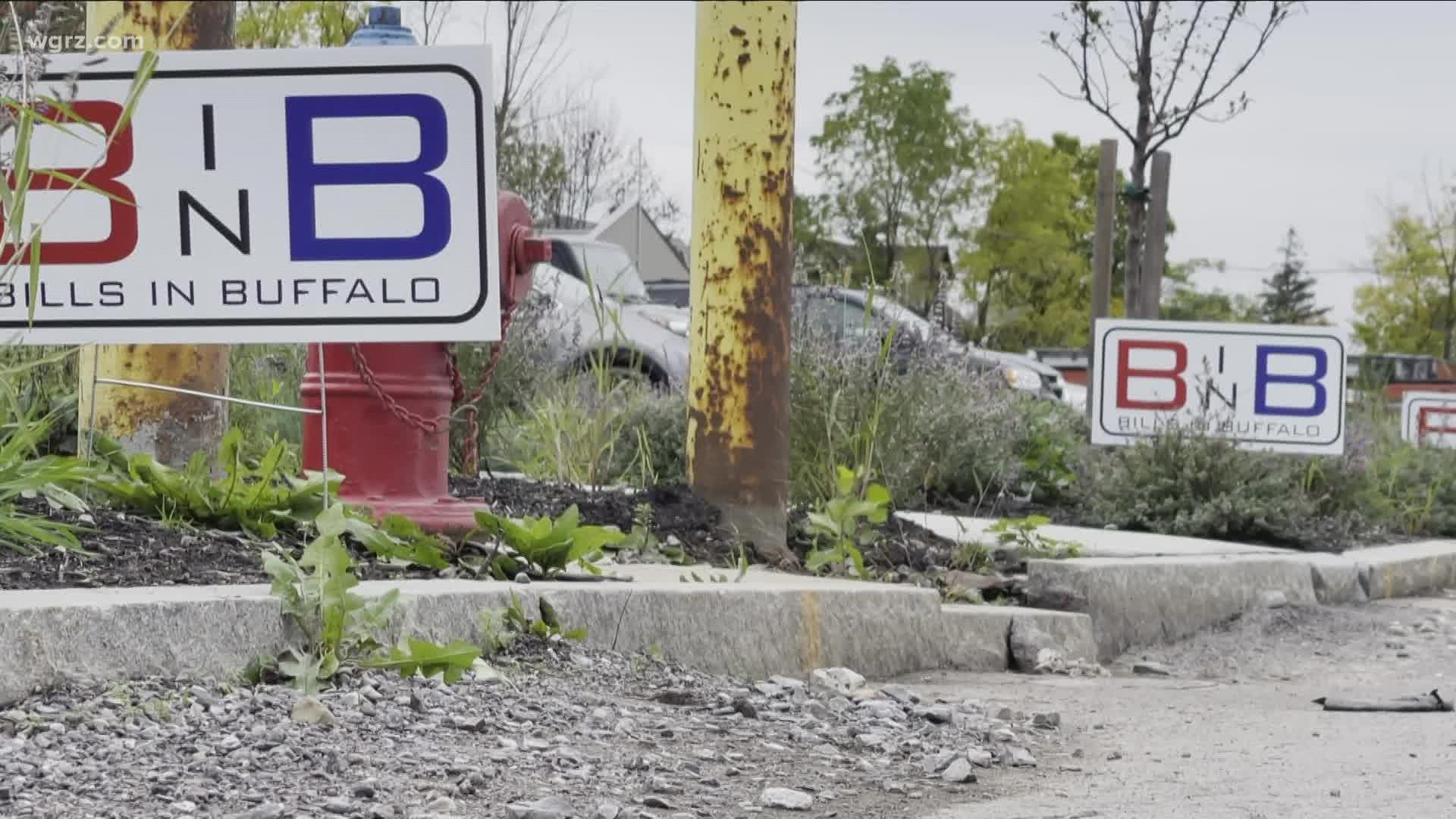 BUFFALO, N.Y. — For months, Pegula Sports and Entertainment has been pushing a site near Highmark Stadium as the best place to build a new home for the Buffalo Bills. Now, we're hearing from the other side.

"We want to move the Bills to Buffalo," said Ben Siegel, co-founder of the Bills in Buffalo group.

The designer and principal at BMS Design Studio made headlines recently when he released renderings showing the possibility of what a Downtown stadium could bring.

"It was a way for us to get out a visual that people could actually see a stadium, the possibility, and it's not just some pie in the sky," Siegel said.

His renderings  -- which put the stadium at a site east of the Cobblestone district between the 190 and South Park Avenue -- followed a vote by the Buffalo Common Council to back a Downtown stadium. Building on that momentum, Siegel started researching different aspects of PSE's arguments against a location in the city.

Credit: Ben Siegel
This rendering, provided by Ben Siegel, simply shows that a Downtown stadium is possible. It is not any type of proposal, in terms of specific size, materials, design, etc.

Critics have said it would cost a lot of money to purchase the property needed to build a stadium at the Downtown location. Siegel disputed that, saying 90% of it is already government-owned.

"Just like the adjacent parking lots in Orchard Park are owned by the county, this is owned by the Buffalo Municipal Housing Authority, so pretty much the City of Buffalo," Siegel said.

If the land owned by BMHA could be obtained for a stadium, there would still be cost associated with the remaining properties, in addition to expenses related to environmental studies, relocation, etc.

Siegel said he simply wanted to show it would not be a cost-prohibitive amount, as some have suggested.

There are some infrastructure concerns with the Downtown site, but Siegel argued the investment would be worth it.

"We have everything we need in this area," Siegel said. "We just need to fix it as we should be doing anyways."

Critics have also claimed the 190 would have to be moved, due to security concerns with having a busy highway so close to the site of a stadium. Siegel studied that as well.

Fans have worried a stadium in the city would lead to gridlock for the tens of thousands of people coming to and leaving from home games. Siegel believes traffic would actually improve compared to the current stadium in Orchard Park.

"Within a quarter mile, you have access to the 33, Route 5, the 190, Ohio Street and other Downtown streets that help disperse traffic, along with Broadway, Clinton, Delaware, Elmwood, etc., "Siegal said, adding that people would be coming and going in all directions as opposed to Orchard Park, where almost all people are coming from the north and head in that direction after games.

Many people who are opposed to a Downtown site say it would take away the beloved gameday tailgating experience, since you wouldn't have similar parking.

"It's somewhat more dispersed, but we've shown that gross square footage, they're nearly identical to each other, so there is adequate parking," Siegel explained. Downtown would also be more accessible to public transportation, ride-sharing services, biking, walking, etc.

Siegal also pointed out the available parking in the Cobblestone District near the arena is about 1.6 million gross square feet, which would be similar to the main tailgating/parking area across Abbott Road from Highmark Stadium.

"A lot of people have had a concern with the tailgating aspect, because of this parking and some people being in Larkinville, some people being by Canalside, but I don't think we give ourselves as Bills fans enough credit," Siegel said. "Because the reality of it is it's not the pavement that we're standing on that makes us the best tailgate in the country. We can do that everywhere. It's not magical pavement."

Siegel said the biggest advantage to a Downtown stadium over a replacement in Orchard Park would be the potential economic development.

Siegel studied stadiums in Detroit, Pittsburgh, Baltimore, Cincinnati and Cleveland, all of which have facilities in downtown areas. Near the Browns stadium, a development project in the hundreds of millions of dollars is now planned, something Siegel says would never happen in Orchard Park.

"The better a downtown typically does, the better the suburbs do, because you're creating more and more jobs, more places to go," Siegel said. "You're getting more tourism going on and more money coming into the economy, because you have a vibrant downtown."

Siegel would love to see a convention center and other developments built in conjunction with a new stadium. The investment would be more, but the long-term financial benefit would be worth it, he argued.

"If you're going to spend that amount of money, we think it's very important you get the most bang for your buck," Siegel said. "It might not be a quick return. It might take 30 years, but we have to think like that the same way that we should have thought about that with UB (North Campus) 50 years ago."

The much-anticipated report from AECOM, which was hired by Empire State Development to examine the stadium issue, was released Tuesday. It found a new stadium is needed, as opposed to renovating Highmark Stadium, although it did not make a recommendation in terms of location.

This is an important step in the process, with Governor Kathy Hochul hoping to move quickly and put a budget request before the legislature early next year.

Siegal said the report showed estimates pushed by Pegula Sports and Entertainment that a downtown stadium would cost about $1 billion more were exaggerated.

"We need to put pressure on the Buffalo Bills to let us know why they're choosing to spend our money in a certain way," Siegal said. "I think we have a right to do that, and we need to know exactly what's driving their decisions, especially when most of it is our money that's going into this."

2 On Your Side reached out to PSE. Ron Raccuia, Executive Vice President of PSE, said he had no comment for this story.

He spoke with The Buffalo News at the recent NFL owners meetings in New York City.

“We’ve spent years studying the various locations, and we know unequivocally that Orchard Park is the most feasible, the most efficient, the most cost-effective location,” Raccuia told the newspaper. “Downtown is a location, but it is not any of those things.”

Siegel's group is now featured on billboards in the city, and yard signs are popping up in yards. He said to expect many more of those in the coming days. There's also a change.org petition.

Siegel acknowledged this region is split, with many people either vehemently in support or in opposition of a downtown stadium. He said his goal is to make sure the decision, which will affect Western New York for decades to come, is properly debated, and what's best for the region is put above what's best for the Pegulas and the NFL. 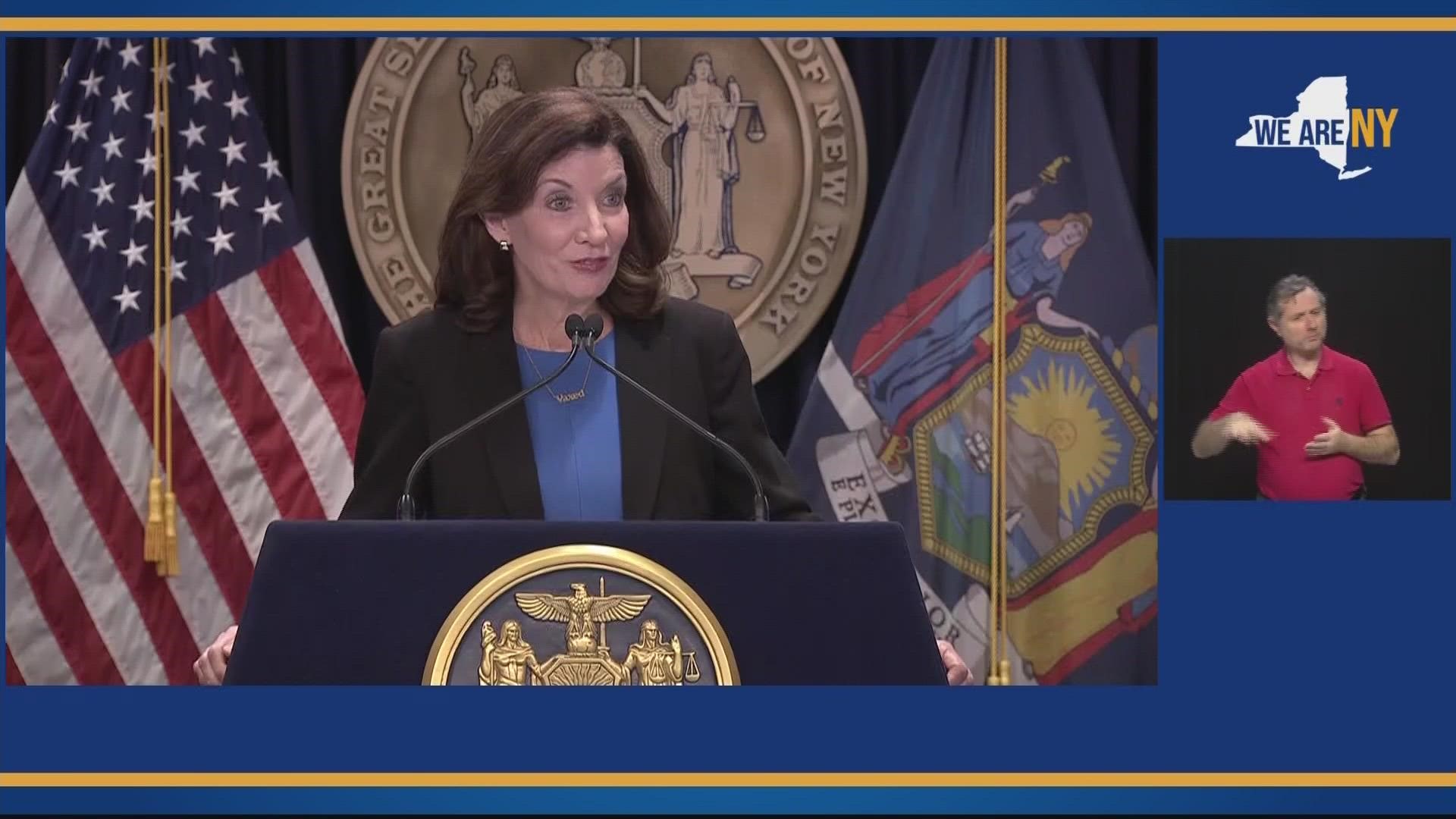