Carucci Take2: Making the case that Bills alone are best team in the NFL

WGRZ Bills/NFL Insider Vic Carucci outlines the case that despite a season-opening loss, the Bills are the best team in the NFL. 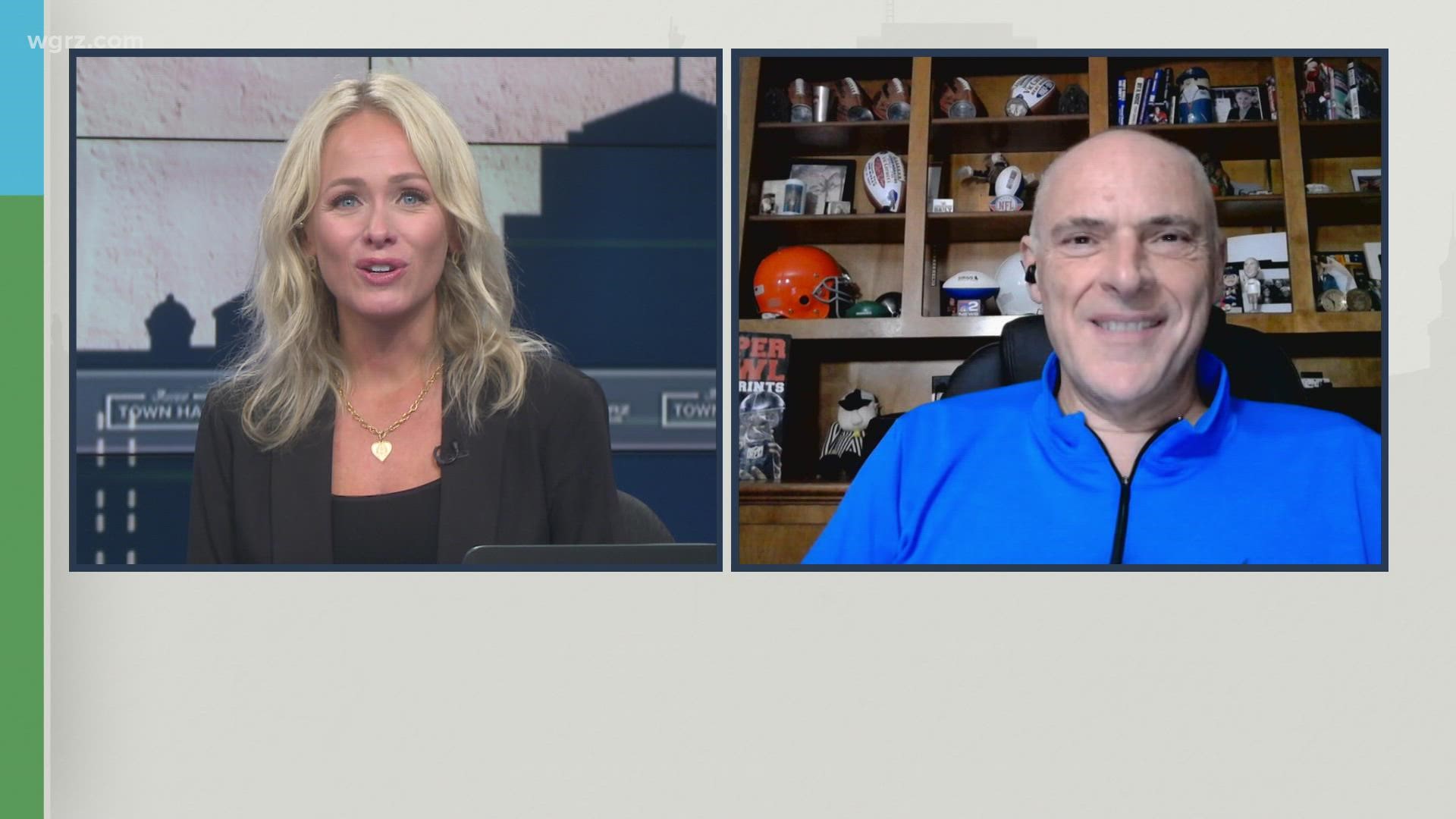 ORCHARD PARK, N.Y. — Each week during the NFL season I cast my vote, as part of a media panel, for the Associated Press power ranking of all 32 teams.

For the past two weeks, I’ve voted for the Buffalo Bills. It wasn’t a homer vote. In previous weeks, I voted for other clubs and had the Bills in various spots within the top 10.

This week, enough of the other voters agreed with me for the Bills to be tied for first with the Arizona Cardinals.

The case isn’t hard to make. Consider, since the opening-day loss against the Steelers, the Bills have gone 4-0 and led the league with an average of 39 points per game, a point-differential average of 115 points per game, and an average margin of victory of 28.8 points per game. By winning four straight games by at least 18 points, they’re tied for the sixth-longest such streak in league history.

At 5-0, the Cardinals are the lone unbeaten team in the league. Some might argue that none of the seven clubs with one loss, including the Bills, should share the rarified air at the top of AP’s or any power ranking.

However, I think it’s more than fair for at least one to receive such recognition. Though solid arguments can be made for each, this is why I say the Bills are not only deserving of sharing the No. 1 spot, but also worthy of being there alone:

Defense. It’s the obvious place to start. It’s where receiver A.J. Brown of the Tennessee Titans, who the Bills are scheduled to face Monday night in Nashville, started with his explanation of why he views Buffalo as “measuring stick” for the Titans.

The numbers tell a convincing story. The Bills rank first in the NFL in fewest points (64) and yards (1,259) allowed. They have and NFL-leading 15 takeaways.

The season-opening loss against Pittsburgh remains baffling, but Buffalo’s D was strong that day as well. In the four games since, it has allowed an NFL-best 10.3 points per game, held a plus-12 edge in turnover differential, and a plus-10 advantage in sack differential.

According to Next Gen Stats, the Bills’ pass rush ranks in the top 10 of the league in pressure rate and sack rate. The most impressive part of that is the Bills are blitzing at the second-lowest rate in the NFL (15.3 percent). As reflected against the Chiefs, the Bills’ ability to almost exclusively generate pressure on Patrick Mahomes with four rushers played a major role in forcing him to hesitate on many throws and/or desperately move around and heave the ball off-target or into harm’s way.

This is a dramatic shift in philosophy for the Bills. Per Next Gen Stats, in 2020, they ranked ninth in the NFL in blitz rate. Through five games this season, they’re 31st. And, yet, their sack rate has climbed from 14th to seventh.

But don’t just go by the numbers.

Go by your eyes, which see the sheer dominance the Bills’ defense has consistently displayed. This unit is playing with a sense of purpose that it wasn’t showing even in 2019, when it was performing well but not well enough to overcome some of the shortcomings on offense.

It’s on a mission, to show that this year it isn’t merely along for the ride while the offense does most of the heavy lifting. It’s aggressive, physical, punishing and intimidating. Every opponent to date has gotten that message loud and clear.

Josh Allen. Though he has only twice resembled the 2020 version of the quarterback who pummeled the record book and was a runner-up for league MVP, he has played more than well enough to complement a smothering defense.

Allen unnecessarily criticized himself for the struggles he had through the first two games. Of course, he merits credit for being the stand-up guy that he has been since his rookie year in 2018. But he also needed to be a bit more realistic than those on the outside who demanded that he start the 300-plus-yards, four-or-more-touchdown-passes thing right away … and do it every game.

It doesn’t work that way, especially this season with opponents more keenly tuned to doing everything possible to minimize his production.

Allen’s phenomenal game against the Washington Football Team was, by itself, validation of the lofty expectations that led to his getting a $258 million contract extension in August.

But what he did against the Chiefs on Sunday Night Football underscored his capability of rising to the occasion in the biggest moments. The Kansas City game was as important as any the Bills will have during their regular-season schedule.

For the record, though, Allen, according to Next Gen Stats, is tops in the NFL with a 133.6 passer rating on deep throws. He also ranks no lower than fourth in most other deep-passing categories.

The offense as a whole. Understandably, Allen is the focus of every conversation about the offense, as well as of the team in general. There’s more to how effectively the Bills move the ball than Allen.

There’s an offensive line that has done a more than sufficient job of protecting him and opening holes whenever Brian Daboll chooses to incorporate the run into the game plan.

There’s a pass-catching corps that received a major difference-making infusion from Emmanuel Sanders, who combines precise route-running with the ability to gain separation, especially on deep patterns.

And, of course, there’s Dawson Knox. If it weren’t for the defense, he would likely rank as the most remarkable story of the season. His improvement over his first two NFL seasons is nothing short of incredible.

It’s similar to what Allen did from 2019 to 2020. Knox provides the offense a dimension it hasn’t had in seemingly forever. He finally gives the Bills the kind of tight end threat that Brandon Beane said was lacking after last January’s AFC Championship Game loss at Kansas City.