A poster on Reddit suggested that Bills fans should donate $17 to the hospital. The total topped $660,000 Monday afternoon. 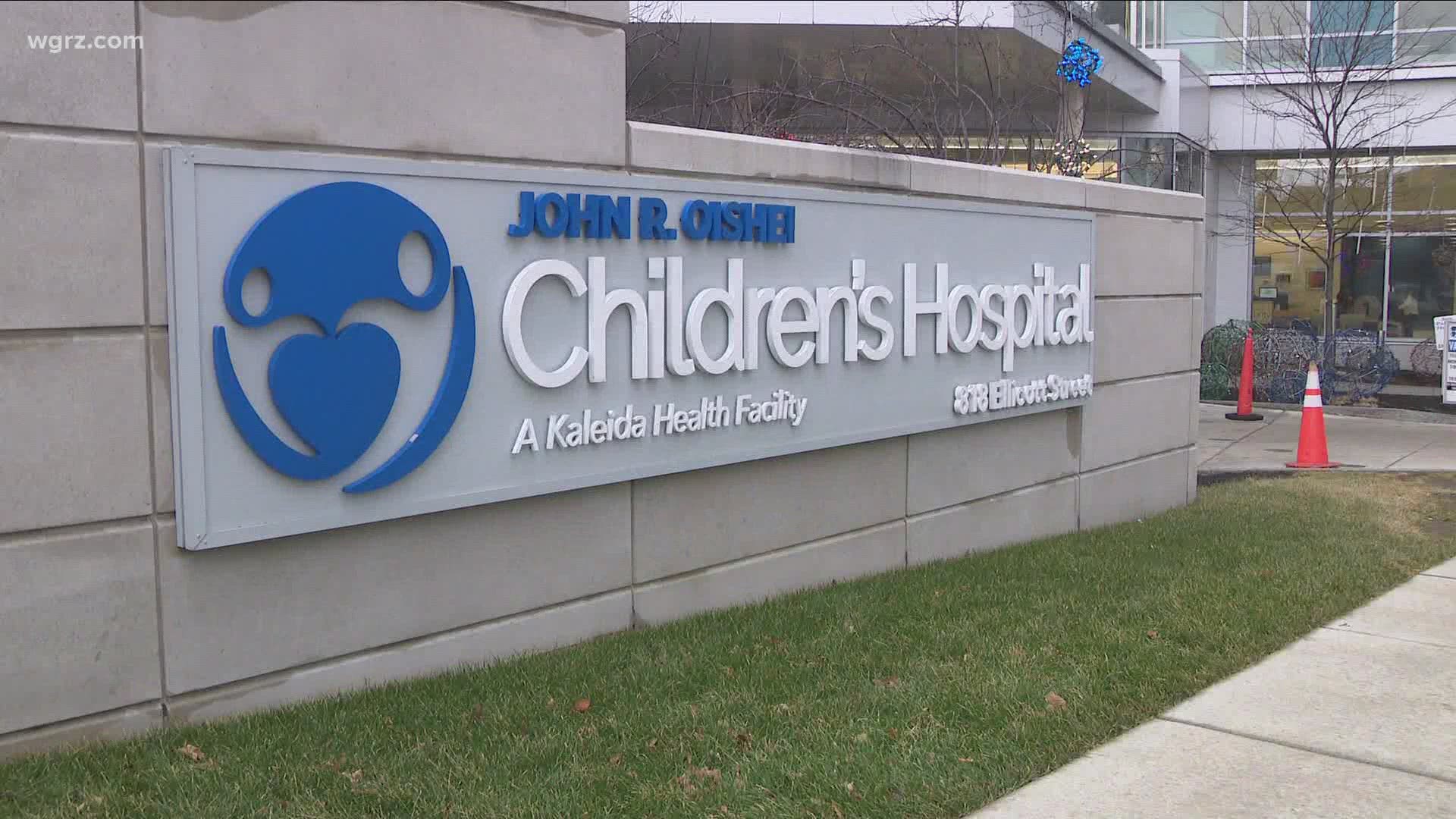 ORCHARD PARK, N.Y. — This story has been edited constantly due to various total updates since November 8, for the most up to date total from Oishei Children's Hospital, click here.

After learning of the sad news that Josh Allen's grandmother recently passed away, Bills Mafia stepped up like they have so many times in the past.

A poster on Reddit suggested that Bills fans should donate $17 to Oishei Children's Hospital. The idea took off rather quickly.

The total topped $600,000 Sunday morning when Greenleaf & Company and the OSC Charitable Foundation each donated $17,000 to the hospital.

On Friday, Allen himself donated $17,000 to the hospital.

Earlier in the week, it didn't take long for momentum to build. As of 10:30 p.m. November 8, Oishei said it received over 500 individual donations totaling around $9,500.

2 On Your Side's Lauren Hall got an update late Monday morning from the hospital saying the total amount donated in honor of Josh Allen's grandmother increased to $24,000 and is "growing by the minute."

How incredible! @JoshAllenQB has rounded your total up to $500,000 #BillsMafia in honor of Patricia Allen 💙 This will have an unbelievable impact on the kids and families we serve! https://t.co/iHtiHYH9ku

We changed our donate button today for you #BillsMafia We are grateful you chose us as a way to honor @JoshAllenQB grandmother. You've already raised over $34,650 and you are making such an impact here for our patients! pic.twitter.com/2rZnmlsoRE

"The donations have continued to pour in all day and have not slowed down. As of 2:50 p.m. there have been over 3,400 donations made totaling just over $62,000. We are again incredibly honored that BillsMafia has selected us as their way to remember Josh’s grandmother. This donation will make a significant impact on our hospital and the patients we serve," Oishei Children's Hospital said in a statement late Monday afternoon.

Another update — now up to $75,000 in memory’s of Josh Allen’s grandmother at @OCHBuffalo @WGRZ

Later in the day, 2 On Your Side's Lauren Hall reported that donations were up to $75,000 in memory of Josh Allen's grandmother at Oishei Children's Hospital.

#BillsMafia we first share in your support of @JoshAllenQB with the loss of his grandmother. Thank you all for the overwhelming amount of donations, totalling at $19,000 and still coming in. We are incredibly grateful and this level of support will make such an impact. Thank you! https://t.co/RxlVAbkTaD

Late Monday, donations surpassed over $150,000 to Oishei Children’s Hospital in less than 24 hours and they are still coming in steadily.

Tuesday morning, donations exceeded $200,000 on what the hospital says is its third birthday. A total of 10,791 donations have been made, so far, from all over the country, Canada and even some international donations.

Good morning #BillsMafia On the hospital's 3rd birthday today, you gave us the best gift by donating over $200,000 in memory of @JoshAllenQB grandmother. And special thanks to the non-Bills fans jumping in to support our cause as well! This is special and we are grateful 💙 pic.twitter.com/kgADn17bEN

Later Tuesday, the hospital announced that donations have gone up to $250,000. "Your donations will make a significant impact in the lives of the kids and families we care for, so thank you," the children's hospital said in a statement.

All the donations have come from more than 13,000 individuals donors.

“Early on in his career with the Buffalo Bills Josh Allen identified Oishei Children’s Hospital as an organization and cause that he wanted to stand strongly behind, and we couldn’t be prouder to have him on our team,” said Allegra C. Jaros, MBA, president, Oishei Children’s Hospital. “Josh is a person that truly cares about our community and the health of the families and kids that call the Buffalo Niagara region home. It’s just incredible to see Bills fans from all over the country, and frankly the world, make such a heartfelt tribute like this and rally around Josh and his family during this difficult time.”

#BillsMafia you have donated $250,000 in honor of @JoshAllenQB grandmother, Patricia Allen! Your donations will make a significant impact in the lives of the kids and families we care for, so thank you ❤️🏈💙 More to come on our formal thank you to you, honoring her

The donations increased yet again Tuesday night, surpassing $280,000. Oishei said on Twitter, "You are going big in honor of Patricia Allen, benefiting our kiddos here at OCH and we are so grateful." The hospital also added a live ticker to its website so you can see updates every five minutes.

#BillsMafia we've added a live ticker that updates every 5 min so you can follow along. You are going big in honor of Patricia Allen, benefiting our kiddos here at OCH and we are so grateful. @JoshAllenQB https://t.co/pS4gCIRfEE pic.twitter.com/UMHIVOJrup

On Wednesday morning, the hospital announced that donations have surpassed $290,000 in honor of Allen's grandmother.

Good morning #BillsMafia We are creeping close to another milestone this morning with over $290,000 in donations in memory of Patricia Allen. Thank you all for making an impact for the kids and families at our hospital in her honor. 💙 @JoshAllenQB

On Thursday afternoon, Oishei reported that donations have surpassed $400,000 from nearly 20,000 donors.

Josh Allen responded to the act of kindness from the fans on Twitter saying, "At a loss for words. Buffalo, I love you."

At a loss for words. Buffalo, I love you. https://t.co/HdhoK0zUp3

How incredible! @JoshAllenQB has rounded your total up to $500,000 #BillsMafia in honor of Patricia Allen 💙 This will have an unbelievable impact on the kids and families we serve! https://t.co/iHtiHYH9ku

The money goes directly to the Oishei Children's Hospital Foundation, which directly helps families. One of the many things it funds is the Child Life Department. It helps families by funding programs and equipment.

The hospital's Chief Medical Officer told 2 On Your Side Tuesday that the people who have donated to honor the memory of Josh Allen's grandmother are helping a lot of families, and he's grateful for that.

"We have many patients who are in need of support with food, with parking expenses, also our Child Life Department really needs as much help as they can get because Child Life is not something that's reimbursed by insurance, so we're able to have Child Life specialists throughout the hospital that are helping children and families navigate all the challenges through play and through art, and so all those things require supplies, so even $5 is going to go to help brighten a child's day," says Dr. Stephen Turkovich.

It also helps with finances, as many children who go to OCH have Medicaid.

"About 70-percent of the children that we see here have Medicaid, and as we know, Medicaid reimbursement is really challenged now especially with the financial challenges of New York State," Turkovich said. "So, every single dollar really helps us because we try to squeeze everything we can out of every dollar. We try to do everything we can for kids in Western New York and the challenge really is that reimbursement from the state and the terms of Medicaid is in jeopardy."

Josh Allen works with the non-profit hospital to raise awareness, and the money that's come in to honor his grandmother will go a long way.

"Many times children just don't have a voice and to have somebody like Josh Allen who can be a voice and bring awareness to children in the hospital and the children in our community is such an amazing thing for Buffalo," says Dr. Turkovich.

#BillsMafia and beyond, we are so grateful for your support for the kids and families we care for, in honor of Patricia Allen. We plan to work with Josh and his family to determine where they'd like to see the donations directed and how they'd like to recognize her at OCH 💙 pic.twitter.com/0uEsMvyeBn

“First, on behalf of all of us at Oishei Children’s Hospital, we want to say that we are deeply saddened to hear of the passing of Josh Allen’s grandmother. Josh has done so much to support us these last few years so we share in Bills Mafia’s support of him and his family during this difficult time.

We are overwhelmed by the incredible support from Bills Mafia, not just here in Western New York, but across the country. As of 9:20 a.m. this morning, there have been over 1,100 donations made totaling over $21,600. We are so grateful for this outpouring of donations in memory of Josh’s grandmother and want to share with Bills Mafia how much our staff and patients appreciate these donations.

Donations made to The Children’s Hospital of Buffalo Foundation support the care, programs, equipment and more throughout Oishei Children’s Hospital. This level of support will truly make such an impact on the children and families here and we are honored that you chose us to honor Josh’s grandmother through these gifts."

"This is what makes Buffalo so special. Proud of BillsMafia for rallying around Josh and this cause. Like they've done before with Pancho Billa and Andy Dalton's situation. That's what makes Buffalo the community that it is," head coach Sean McDermott said Monday on the donations being made to Oishei Children's Hospital.

"Just received a text from one of the people that head up the Children’s Hospital of Buffalo Foundation. Enough donations are coming in that it’s being noticed. Well done #BillsMafia," according to "BillsMafia" phrase co-founder, Del Reid

Just got another update from @OCHBuffalo - the total amount donated in honor of Josh Allen's grandmother is now up to $24,000 and is "growing by the minute." @WGRZ

Allen completed 31 of 38 passes Sunday during a 44-34 win against the Seattle Seahawks. He finished with 415 yards and also ran for a touchdown.

In doing so, Buffalo improved to 7-2 for the first time since 1993, when the Bills made their last Super Bowl appearance.

Just received a text from one of the people that head up the Children’s Hospital of Buffalo Foundation. Enough donations are coming in that it’s being noticed. Well done #BillsMafia 👍 https://t.co/ljsio5SYHk