From Kelly 2 Allen: The challenge of becoming a franchise quarterback in Buffalo 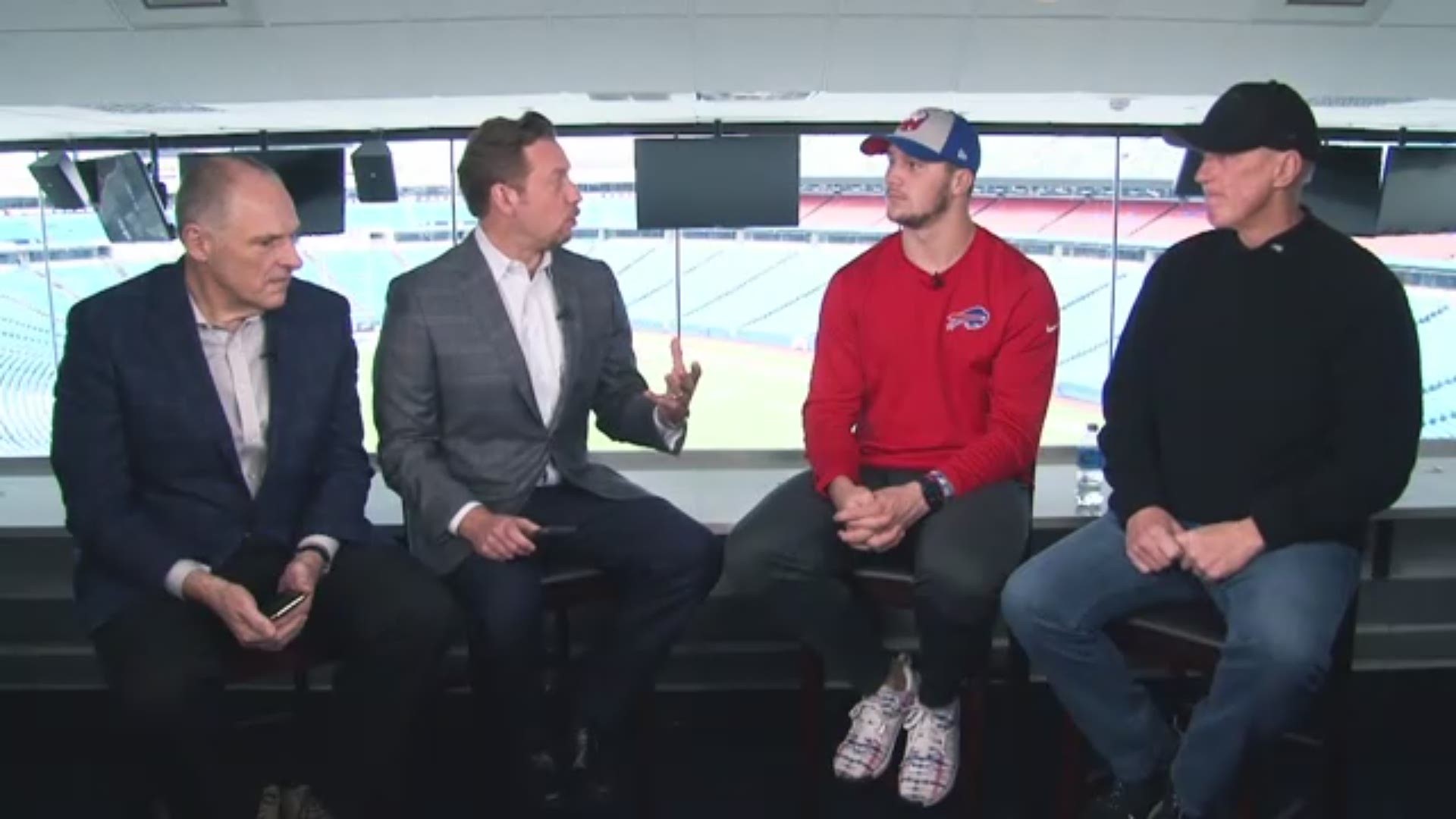 ORCHARD PARK, N.Y. — For more than two decades, the question has gone unanswered.

Who is the next franchise quarterback of the Buffalo Bills?

There is no question about who the last one was. Jim Kelly was a first ballot Hall of Famer who led the Bills to four straight Super Bowls in the early 90's.

The Bills are betting Allen will develop into the next franchise quarterback after trading up to draft him seventh overall in 2018.

Kelly has done his best to help Allen in a challenging process for any young QB.

"I see everything you want as a quarterback I emphasized this to him a while ago that my toughest year was my second year. I think I threw 15 touchdowns and maybe 17 interceptions. It’s not easy especially when teams start to learn who you are and what you’re capable to doing. He’s doing awesome. He just has to keep that pace."

For his part, Allen says he's focused game to game, and finding his own pace.

"I’m really not focusing on that. I’m focusing on helping this team win football games. Everybody knows who JK is and what he’s done here and that’s obviously the type of football and the level that I want to get to and get this team to and that’s really all I’m worried about is to try to win games for this football team."

The Bills are 7-3 ten games into Allen's second season, but the offense has struggled to produce for much of it against a relatively soft schedule.

However, the Bills scored a season high 37 points against the Dolphins on Sunday, and Allen says he's putting to use much of Kelly's advice. That's clear in this exchange from the interview.

Jim Kelly: If there ever comes a point in the game where the play is coming in late, call your own play!

Adam Benigni: He (offensive coordinator Brian Daboll) said you have that option right?

Josh Allen: There was a couple of times this Sunday I did it … and it worked out to our advantage.

Josh Allen:  It was third down … one of our first third downs, and they tried to sub out, and I called a play, and we got them for 12 men on the field.

Allen says he marvels at the way Kelly called his own plays in executing the Bills K-Gun offense back during their run to four straight Super Bowls. Allen says the current Bills have modeled a couple of plays from that offense, but admits he is still a work in progress.

"I’m still growing,  I’m still learning… and to be in that position where you can go up and call the whole game from the quarterback position… It’s unbelievable. It’s unbelievable recall.  You have to have a great mind for it."

Kelly says he thinks Allen has that potential but that fans should be patient.

"I’m excited ... and he knows that it takes time though. I mean you’re not going to do miracles after one or two years. It’s going to take a little time."

Allen says Kelly has also given him good advice on how to balance football with a focus on supporting the community as well.

"He’s shared a lot. He’s been an open book. One of my first days of rookie mini-camp he was there, I got the chance to meet him. Obviously I was shaken, but what he’s talked to me about, how he’s allowed be to kind of be a part and pick his brain. We spent some time together going to his lodge and doing this and that … going to his house ... he’s been fantastic. I can’t thank him enough for what he’s done for me … what he continues to do for me. It’s awesome."

WGRZ Sports Director Adam Benigni was joined by Vic Carucci of the Buffalo News for this interview.  WGRZ and the Buffalo News also combine to produce "Sports Talk Live Buffalo" that airs every Monday at 7:30 p.m. on WGRZ.