Members of the team's glory years see some similarity between this squad and the ones that played in four consecutive Super Bowls. 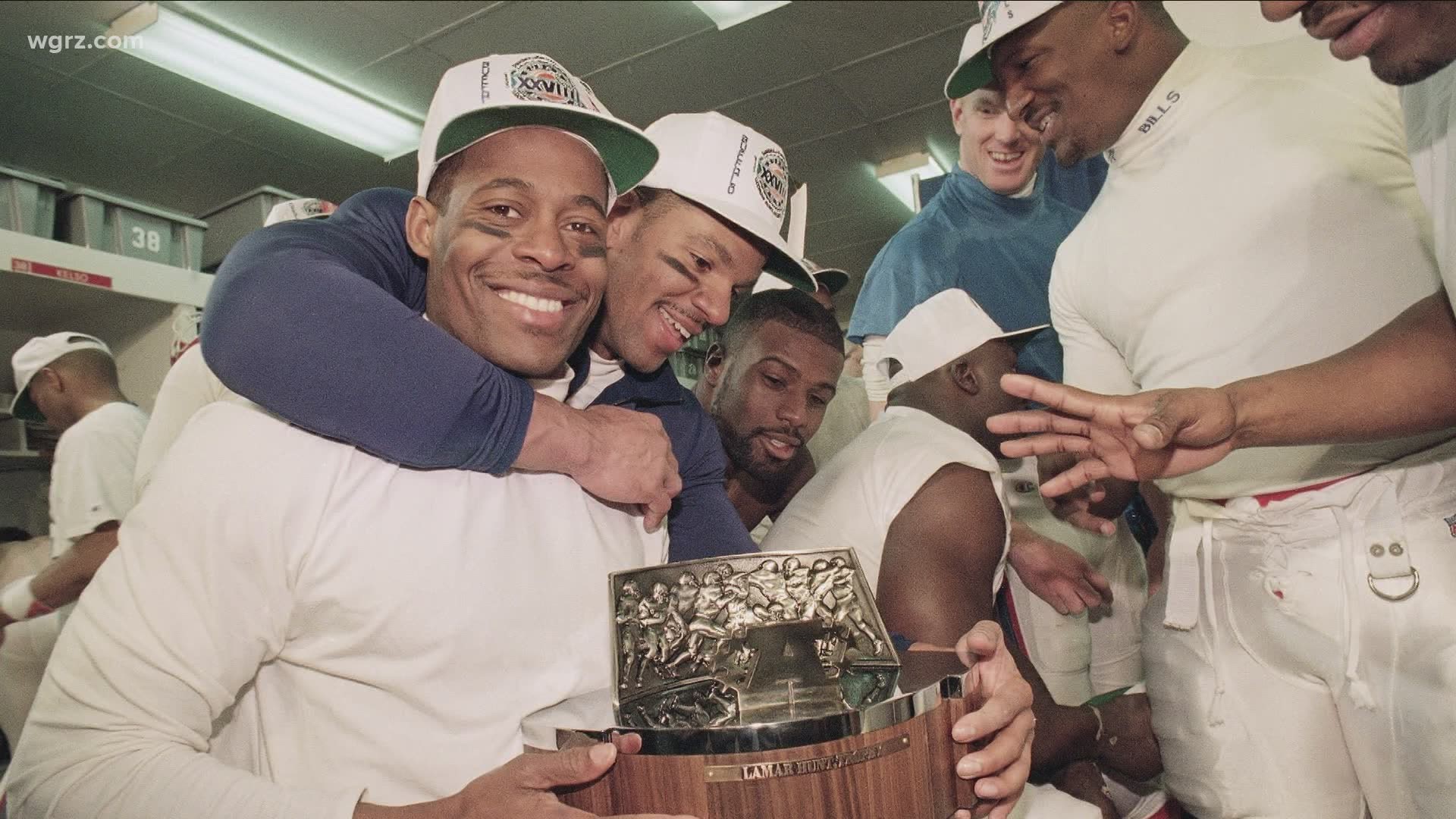 BUFFALO, N.Y. — When he joined the Buffalo Bills in 1989, Don Beebe came onto a team which, like this year’s version of the Bills, was just coming into its own.

He sees similarities between the quarterback who lead the Bills to become an NFL powerhouse in the early 1990’s, Jim Kelly, and current starter Josh Allen, who this year broke many of Kelly’s season records for the team, and a 13-3 regular season.

“Both are big bodied gunslingers, and Josh is just playing lights out right now,” said Beebe, who played on all four Bills Super Bowl teams and is currently the head football coach at Aurora University, a Division-III school in Illinois.

He also sees similarities between the current crop of Bills receivers lead by Pro Bowl starter Stefon Diggs (who also set team records this year for receptions and yardage) and the trio which he played with, which included Hall of Famers Andre Reed and James Lofton.

“These Bills have three really good wide receivers who compliment each other well,” Beebe said during a phone interview Monday morning.

He also noted that the current Bills dominated their opponents in December and early January, culminating with a season finale in which they put up 56 points against the Miami Dolphins, who reputedly had one of the better defenses in the NFL.

This is yet another similarity to the current Bills, and the teams Beebe played for, which will forever be counted as among the best Bills teams of all time.

"We always had a knack of finishing strong and getting into the playoffs on a roll, and that's exactly what you see right now, " Beebe said.

One major difference he sees at this point; however, is the current Bills’ lack of an all-world running back like Thurman Thomas, another of the Bills from the glory years currently enshrined in the Pro Football Hall of Fame.

“Believe me, without Thurman we wouldn’t have done what we did," Beebe said, referring to the Bills still unequaled mark of making four consecutive Super Bowls.

Despite that, Beebe believes this current Bills team stands a good chance of doing something those great ones of the past never did; win the Super Bowl.

“If I was to pick, I'm going to pick teams that are hot. And right now, the Bills are hot, especially offensively," Beebe said. “I think they have the ingredients to pull this thing off.”

"I think their destined for the Super Bowl," said Kurt Schulz, who played as a defensive back during the last two seasons in which the Bills made the Super Bowl.

“I think the thing that strikes me most about this team is how much unity they have. They’re really playing like a team. They’re having fun and it's just exciting."

Currently a financial advisor, Schulz may often be telling his clients to “trust the process,” which has been a catchphrase for the Bills under Head Coach Sean McDermott and General Manager Brandon Beane

“And the players are buying into the system and they’re playing great football,” Schulz said.

Schulz still lives in Western New York, but you can go across the country and find ex-Bills who are just as excited as he is about the current team.

“I bleed red, white, and blue,” said Mickey Washington from his office in Houston, Texas where he practices as an attorney.

He started at cornerback during the Bills last trip to the Super Bowl and came to a team which was loaded with perennial all pros and future hall of famers by the time he arrived.

Although many among the current crop of Bills may have not yet reached the status of being household names like the stars he played with, according to Washington this team is loaded with a “youthful swagger” that he believes will serve them well in the postseason.

“These guys are hungry,” Washington said. “And when you have a team of hungry guys, that makes a difference.”

Schulz added, “You can have unbelievable athletes out there but unless you play like a team you are gonna have some breakdowns."

“It’s kind of like Tampa Bay right now," Washington said. "They’ve got all these high-profile guys, but they still have to hit it together. Buffalo is there right now… this team can go as far as they want to go.”

There is one thing the current Bills do not have that the teams from the glory years did; 70-80,000 screaming fans in the stands urging them on.

The COVID-19 pandemic curtailed attendance to the games all season, and only 6,800 fans will be permitted to attend the game for the first time all season when the Bills host the Indianapolis Colts for the first round of the playoffs on Saturday.

“Those fans... the greatest of any team in any sport, are what I remember the most,” Beebe said.

The memory of Bills fans came flooding back this past Sunday, which was the 28th anniversary of the greatest comeback in NFL history, in which Beebe played a vital role.

On January 3, 1993 the Bills erased a 32 point third quarter deficit and roared back to defeat the Houston Oilers in overtime, 41-38, during a wild card playoff game.

“And what pulled us through was the fans… I mean it was crazy," Beebe recalled.

Though his time with the Bills only lasted two seasons, Washington also recalls the fever of fans from an era long before anyone jumped through a folding table or coined the term "Bills Mafia."

“I still remember pulling into the stadium for a game and there was a guy who had a makeshift jacuzzi in the back of his truck… and he’s sitting in it on a day when the temperature felt like 30 below zero,” he said.

“But that’s what makes it Buffalo, man,” Beebe said. “I just wish the players today, during this run that they are having, were able to experience that.”

On the other hand, having no fans in the stands has not seemed to hurt the Bills in the victory column.

“It helps to have fans in the stands, absolutely,” Schulz said. “But it doesn’t take away from the amount of support that Buffalo has for the Bills. And knowing, as a player, that they’re all supporting you and playing on national TV, that’s something.”