WGRZ Bills/NFL Insider Vic Carucci says the Colts provided a solid reminder that when you step up in weight class, you’d better be ready to play at your very best. 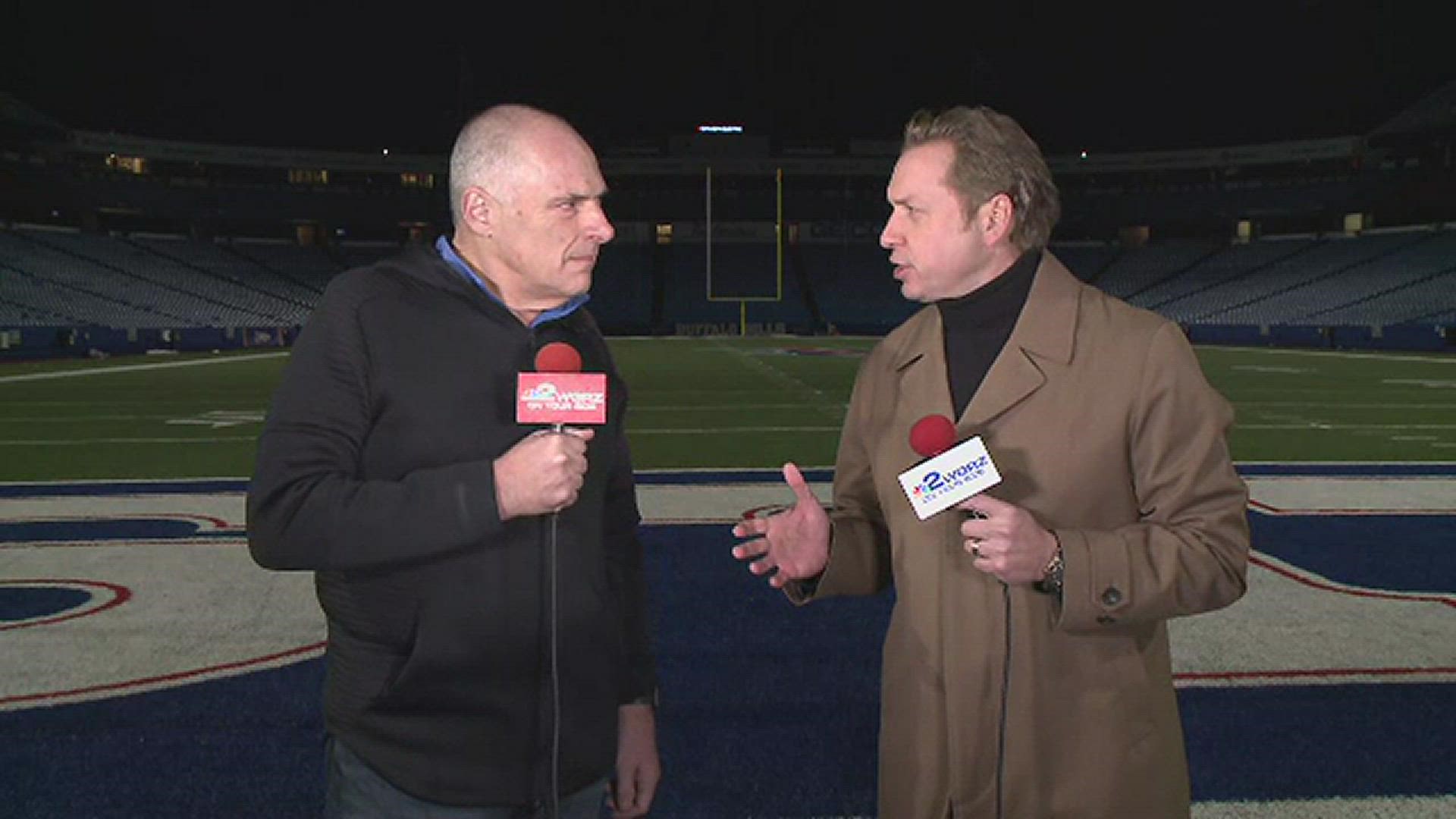 ORCHARD PARK, N.Y. — Here are my five takeaways from the Buffalo Bills’ 41-15 loss against the Indianapolis Colts on Sunday at Highmark Stadium:

1. How about that for a wake-up call?

After cruising to a 45-17 win against the New York Jets, the Bills ran into arguably the second-best opponent on their schedule to date. And the Colts provided a solid reminder that when you step up in weight class, you’d better be ready to play at your very best.

The Bills weren’t, and it led to the most points they’ve allowed at home since 2018 against the Chicago Bears (whose quarterback, ironically, was Bills backup Mitchell Trubisky).

Josh Allen looked out of sync with his receivers for most of the game. He threw two interceptions, nearly threw a third, and badly misfired on other throws before Sean McDermott showed mercy by replacing Allen with Trubisky with 6 minutes, 17 seconds left and the Colts holding a 26-point lead.

The Bills’ defense hardly resembled the unit that entered the game ranked first in the NFL. For the second time this season, it was trampled by a top-tier running back, with Jonathan Taylor running for 185 yards (including one for 40) and four touchdowns, and catching a TD pass. The first time was against Tennessee’s Derrick Henry. In all, the Colts ran for 264 yards and averaged 5.7 yards per carry.

“Everything starts with stopping the run, affecting their quarterback, and taking the ball away,” safety Micah Hyde said. “We did none of those today. Not one thing. We didn’t do well on third down, we didn’t do well in the red zone. We didn’t put (Carson) Wentz in tough situations, and they were able to run the ball. We were giving them too much yardage on first and second down; they were getting third-and-1, third-and-2, third-and-3. They were still able to run, and we weren’t able to stop it.

Does McDermott see the problems against powerful backs as an issue?

“Yeah, I really do,” the coach said. “We’ve got to get that fixed. There’s a formula to win, there’s a formula on the other end of it, too, and when you’re getting beat at the point of attack, obviously, I’ve got to do a better job there.”

The game was an embarrassment for a so-called serious contender. It was inexcusable.

Make no mistake. The Colts are a good team and more than capable of providing a challenge. But the Bills should view suffering a lopsided loss at home as unacceptable.

2. The Bills’ self-inflicted wounds were, to say the least, disturbing.

It’s one thing to see Taylor run all over the defense. Or the Colts’ offensive line consistently impose its will on the Bills’ defensive front. Or the Bills’ offense struggle to make plays.

It’s another when the Bills continually hurt themselves.

Allen interceptions led to a pair of Colts touchdowns. An Isaiah McKenzie fumble on a kickoff return set up another. And the penalties. The Bills had five against them that were accepted, including two roughing-the-passer calls and a hit out of bounds on the defense.

The Bills simply didn’t play clean or smart. For as much as this sort of undisciplined play is supposed to be contrary to what McDermott constantly preaches, it’s becoming increasingly evident the message isn’t getting through.

“We’re a really good football team when we don’t bite ourselves in the butt,” Allen said.

3. Yes, that was booing heard at various times.

The fans were understandably frustrated by what they saw. This was a sorry performance, certainly not worth watching while sitting in the rain.

It certainly gave the Bills’ fan base more than enough reason to pause and ponder exactly what this team is all about. The unbridled exuberance over this team, shaken more than a little bit by the disaster in Jacksonville, has been dialed back by a lot. Excitement has been replaced by full-fledged concern.

One of the biggest causes has to be the surging New England Patriots, who the Bills now trail in the AFC East face twice next month. The Pats’ defense looks legit. So does their rookie QB, Mac Jones.

“We know who we are,” Allen said. “And that, that we put out there on the field, that’s not who we are. … I’ve got a lot of trust and a lot of faith in our team and there’s no secret that we need to do a better job on all fronts. But at the same time, it’s not panic mode. We’ve got to learn on this one and move on as quickly as possible.”

4. Is there a bright spot anywhere?

Of course. The Bills have six wins and there are seven games left. Plenty of chances to rebound.

Will they? That’s a different question. I’m having a hard time seeing it right now.

5. There’s almost no time for the Bills to wallow in the aftermath of their second-ugliest loss of the season (assuming the Jacksonville game was uglier).

On Thanksgiving night, the Bills face the Saints in New Orleans. It will be an opportunity for some redemption – or further embarrassment – on a national stage.

Quick-turnaround games are difficult for many reasons, not the least of which is the inability to have much meaningful practice time. The other problem is healing. The Bills took a physical beating in this one, especially on defense. Taylor’s runs and the Colts’ blocking left some marks.

“There’s some bad to the short turnaround because you can’t really get back on the practice field for all that much time and there’s some good to it so you can move on and move forward,” McDermott said. “I’m not really sure which one I like more, to be honest with you.”

After a game like Sunday’s, neither is probably all that appealing.

1 / 13
AP
Indianapolis Colts running back Jonathan Taylor (28) dives into the end zone during the first half of an NFL football game against the Indianapolis Colts in Orchard Park, N.Y., Sunday, Nov. 21, 2021. (AP Photo/Adrian Kraus)