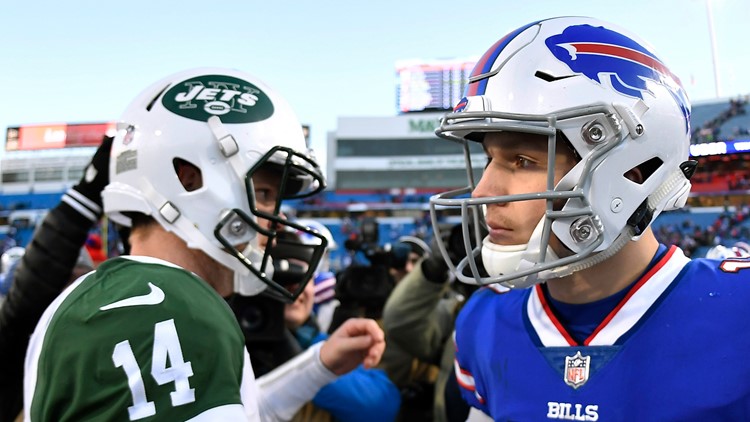 EAST RUTHERFORD, N.J. — The recent history is too significant to ignore.

Sam Darnold and Josh Allen were the third and seventh overall picks in the 2018 NFL draft.  How quickly each progresses could go a long way toward determining what team, the Bills or Jets emerge to challenge the New England Patriots atop the AFC East.

On Sunday we get the next indication.

This will be the second meeting between Darnold and Allen as the teams take the field at MetLife Stadium to open the 2019 season.

The first, with both quarterbacks healthy, was in Week 14 of last season in Orchard Park. Darnold threw for 170-yards with a touchdown and an interception in a 27-23 win for New York. Allen threw for 206-yards and was picked off twice. He also ran for 109-yards which of course was a theme all season long, one that can't continue as the supporting casts change and the teams evolve into 2019.

How the Bills adjust and how quickly they can get up to speed with the overhaul of the offense, the line in particular, will be the major factor early in the season. The Jets in the meantime, are playing their first game under hew head coach Adam Gase.

Here's a quick pregame look at some of the key match-ups:

Former Bills coach Gregg Williams is known for his aggressive schemes. The Jets operate out of a 3-4 base and Williams will bring plenty of pressure. New York is loaded with talent up front that includes DE Leonard Williams, NT Steve McClendon and DE Henry Anderson with first round pick Quinnen Williams rotating in. While the Jets have questions in the secondary, the front will put Buffalo's revamped offensive line to a stern and immediate test.

It's within that context that Allen will need to show the extent to which he's developed. His ability to recognize and deal with with pressure Williams will inevitably bring. He's obviously shown an ability to run, which is an asset, but relying on that is something this offense needs to get beyond.  A balanced attack behind the new line and Allen, showing he can deliver the ball consistently from the pocket will be vital to Buffalo's success.

The Jets signed Bell in the offseason to the tune of $52.5 million with the idea of creating balance and a dynamic ground attack for Sam Darnold in year two. How quickly that happens behind a questionable Jets offensive line remains somewhat of a question. New York held Bell out of preseason action. The Bills looked strong against the run in the preseason. With the Buffalo offense likely set to experience some growing pains, keeping Bell under wraps will be critical for the Buffalo defense.