Quarterback Josh Allen finished with two touchdown runs for Buffalo, which was off to its best start since 1993. 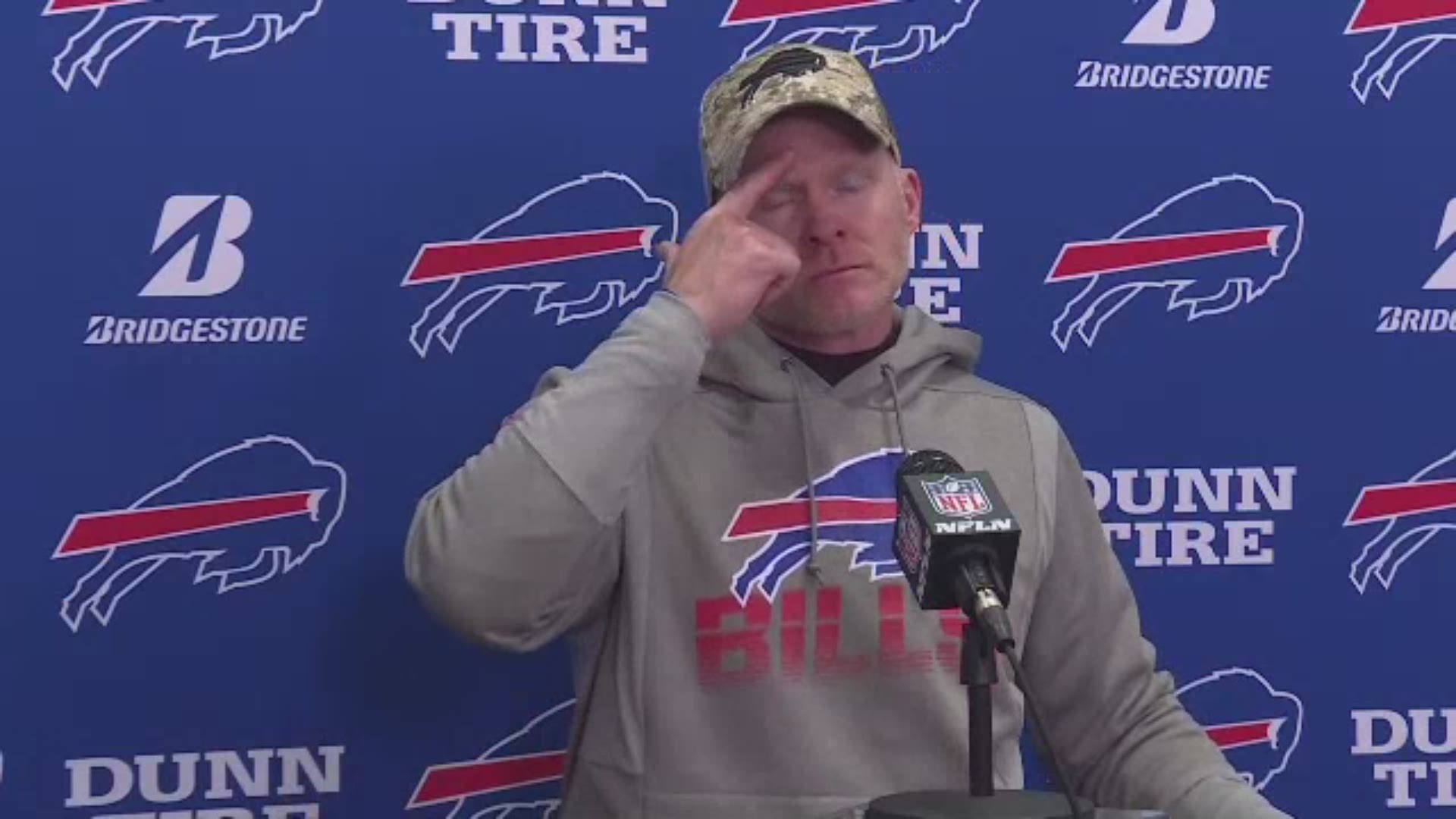 CLEVELAND — When Buffalo's game-tying field-goal try with 22 seconds left failed to clear the uprights, the Browns spilled onto the field and celebrated almost from goal line to goal line.

They jumped. They hugged. They exhaled.

Their season has new life.

Baker Mayfield threw a 7-yard touchdown pass to Rashard Higgins with 1:44 left as Cleveland snapped a four-game losing streak — and took some pressure off first-year coach Freddie Kitchens — with a 19-16 win on Sunday over the Bills, who couldn't come up with one last goal-line stand.

"We needed to have that," Mayfield said.

With Kitchens under fire and their playoff hopes fading fast, the Browns (3-6) rallied for their first win at home and kept their season from completely collapsing.

Not easy. Not pretty. Welcomed.

"This is a good start for us," said star receiver Odell Beckham Jr., who had five catches for 57 yards. "We got a tough win against a very good team."

Cleveland survived more problems in the red zone — the Browns scored just three points despite 12 plays inside Buffalo's 3-yard line — but sealed the much-needed victory when Buffalo's Stephen Hauschka's was off the mark on a 53-yard field goal. Earlier, Hauschka missed a 34-yarder.

"I hit it OK, but not the way you need to hit it from that distance," Hauschka said. "I didn't really get all of it going in that direction. With a little bit of right to left wind it's going to take it if you don't get it all."

Quarterback Josh Allen had two touchdown runs for the Bills (6-3), who were off to their best start since 1993.

For most of the game Allen outplayed Mayfield, who finally delivered a clutch drive after the Bills QB put his team ahead 16-12 with a 1-yard sneak.

On second-and-goal, Mayfield threaded his TD pass to an open Higgins, who had been suspiciously missing from Cleveland's game plan this season after being one of Mayfield's favorite targets last season. It was Higgins' only catch.

"I had a dream I scored — and it happened," said Higgins. "Not like that, the game-winner. In my dream, I woke pretty quickly. I don't know how it ended."

Mayfield had his second straight solid game, completing 26 of 38 passes for 238 yards and two TDs. He didn't throw an interception for the second week in a row.

However, Cleveland struggled again to complete drives as the Bills stopped them on 12 plays inside the 3-yard line, holding Cleveland to three points.

"We had the big goal-line stand, but at the end of the day when the game is in your hands and you figure the defense is the bell cow of your team, we had to come up with a play to stop them," Bills linebacker Lorenzo Alexander said.

Browns running back Kareem Hunt made his debut for Cleveland and picked up 74 combined yards. The 24-year-old was eligible after completing an eight-game NFL suspension for two violent acts, including shoving and kicking a woman while he played for Kansas City.

"There are not enough words to tell how I felt being back out there," Hunt said. "I was thankful, sad. A couple times, I thought I was going to shed a tear. It's really good to be back home with the Browns. Any time I get an opportunity to make a play, I'm going to do it."

Nick Chubb rushed for 116 yards on 20 carries for the Browns, and Jarvis Landry had nine catches for 97 yards and made a crucial, over-the-shoulder catch on Cleveland's game-winning drive.

"Honestly, I've been working on stuff like that a lot," he said. "I just looked over my shoulder and the ball was there."

The Bills stopped the Browns on eight straight plays at the 1 — the equivalent of two goal-line stands — in the first quarter. They stuffed Chubb on five carries, and Buffalo overcame a pair of pass interference calls in the end zone while keeping the Browns off the scoreboard.

"Our defense played extremely well today," Allen said. "They gave us a chance. Everybody knows that you have to score more than 16 to win."

The Bills' defense tied it 9-9 early in the third as linebacker Tremaine Edmunds sacked Mayfield in the end zone. The Browns were in an empty backfield and didn't account for blocking Edmunds, who came in untouched off the left side and quickly wrapped up Mayfield.

Chubb's 919 yards rushing through nine games are the most by a Cleveland player not named Jim Brown. The Hall of Famer and NFL legend owns the top five spots on the list, including a franchise-record 1,293 yards in 1963.

The Browns sat No. 3 wide receiver Antonio Callaway, who had played in all four games since returning from a four-game drug suspension to start the season. Callaway had a big drop in his first game back and hasn't been as consistent as the Browns had hoped.

Callaway's absence cleared the way for Higgins, who made his one catch count.

"It's between Antonio and I," he said.

Callaway warmed up on the field, but watched from a suite.

"He was going to be part of the game plan," Mayfield said. "But things happen."

Bills: At Miami on Sunday.