The Nationals beat the Astros 6-2 in Game 7 of the World Series, and fans at the Nats Park watch party are going nuts. 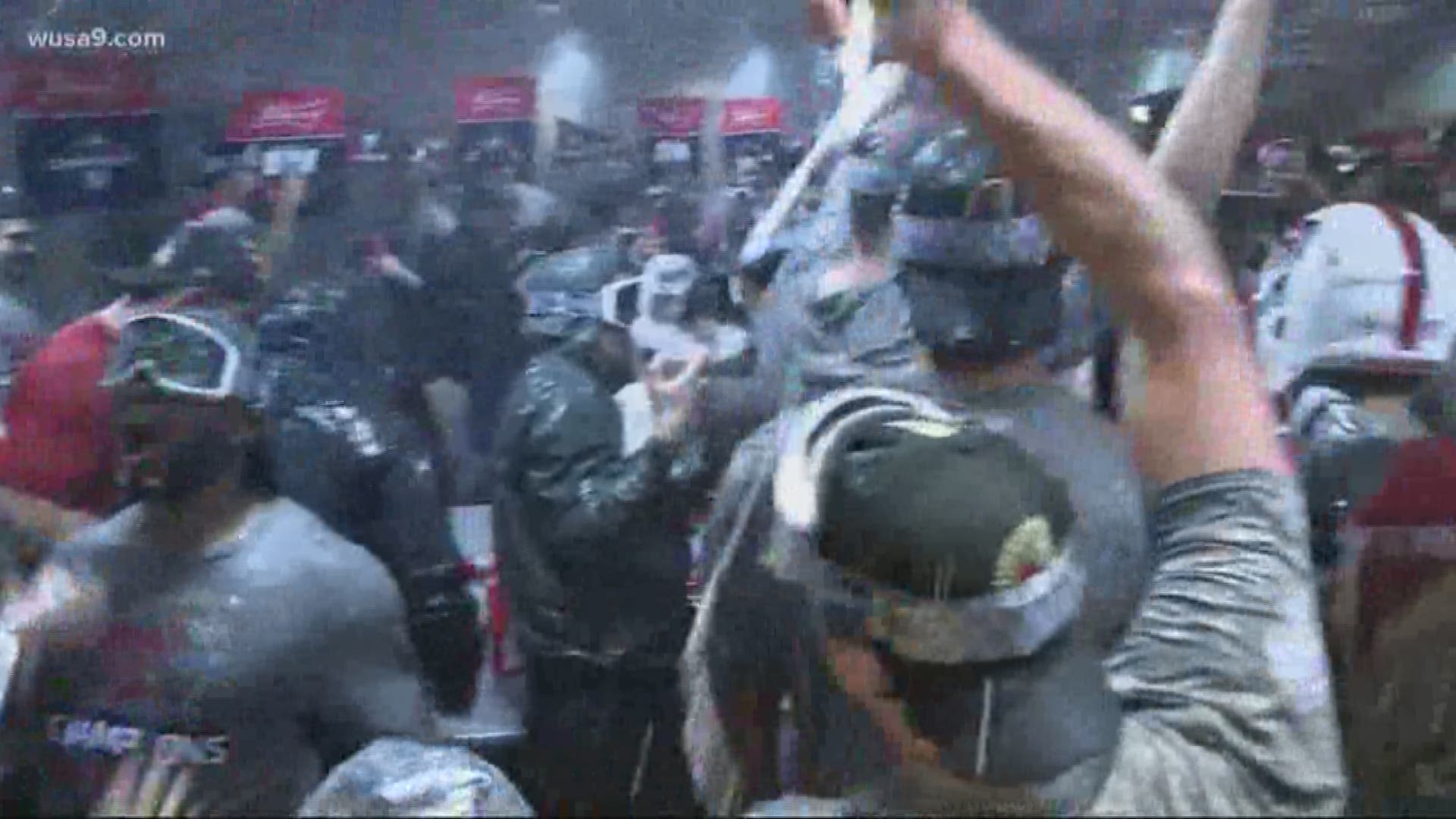 WASHINGTON — After an iconic, historic and nail-biting World Series run, the Washington Nationals are world champions, defeating the Astros 6-2 in Game 7 at Minute Maid Park in Houston!

It is the first time in history that every game in the series was won by the road team, and the first time since 1924 that a D.C. baseball team has won the World Series.

The Astros got on the board first, with a home run in the second inning, scoring again in the 5th. The Nationals waited until their magical 7th inning to answer, starting with a solo home run from Anthony Rendon, followed shortly by a two-run home run from Howie Kendrick, giving the Nats their first lead of the game.

The Nationals scored more runs than any other MLB team in the 7th inning or later for the 2019 season.

Soto helped add an insurance run in the 8th with a single to right field scoring Adam Eaton. And in the top of the 9th, Eaton singled to center field scoring Gomes and Robles, for a final score of 6-2.

Davey Martinez also became the first manager to be ejected in a World Series game since Bobby Cox in 1996, when he got heated in Tuesday's Game 6 Shortstop Trea Turner was called out on a controversial base-runner's interference call, and Martinez had to be held back while arguing the call. For his efforts, the second-year Washington skipper was ejected in the 7th.

Corbin still in for Washington and he strikes out Carlos Carroea, grounds out Robinson Chirinos and strikes out Jake Marisnick for a 1-2-3 inning.

Osuna still in and forces a Trea Turner ground out before walking Adam Eaton, who goes on to steal second with one out. Anthony Rendon flies out to center for the second out but Juan Soto knocks in Eaton with a single to give the Nationals a 4-2 lead.

Soto then advances to third on a Kendrick single before Houston brings in Ryan Pressly to line out Asdrubal Cabrera and head to the bottom of the eighth.

Corbin still in for Washington. Michael Brantley flies out to deep center and Alex Bregman grounds out before a Yuri Gurriel single. Yordan Alvarez, however, grounds out to Corbin and the Nationals are six outs away from a championship.

Greinke still in. Adam Eaton grounds out to short but Anthony Rendon puts the Nationals on the board with a solo shot to right field. After a Juan Soto walk, A.J. Hinch pulls Greinke for Will Harris, who surrenders a Howie Kendrick homer to right field.

Hinch then brings in Roberto Osuna to close the inning.

Patrick Corbin in for Washington and he surrenders a leadoff hit to Jake Marisnick to start the inning. Corbin, however, battles back to strike out George Springer before forcing Jost Altuve into a ground out double play.

Greinke still in for Houston and he forces a Yan Gomes fly out and a Victor Robles check swing ground out before striking out Trea Turner looking to complete the 1-2-3 inning.

Scherzer still in the game and Michael Brantley reaches first on a leadoff single. Scherzer strikes out Alex Bregman and forces Yuli Gurriel into a fielder's choice. Yordan Alvarez walks and Carlos Correa lines a hit off the glove of Anthony Rendon, bringing in Gurriel for another run. Robinson Chirinos then strikes out to end the inning.

Following a Juan Soto strikeout, Howie Kendrick reaches first base on a walk. Asdrubal Cabrera grounds out, advancing Kendrick to second -- the furthest a Nationals baserunner has traveled tonight -- but Ryan Zimmerman flies out to first base to end the top of the fifth.

Carlos Correa grounds out to second and Robinson Chirinos strikes out before Josh Reddick notches a two-out single and George Springer reaches first on a walk. In what could be Max Scherzer's final batter of the game, Jose Altuve flies out to end the inning.

Trea Turner and Adam Eaton each ground out to Zack Greinke and Anthony Rendon strikes out swinging for another 1-2-3 inning.

Jose Altuve hits a lead off single to left, Michael Brantley flies out to left and Alex Bregman walks to put two on with one out. Yuli Gurriel flies out to right for the second out and Yordan Alvarez hits a deep fly out to center to end the inning.

Ryan Zimmerman grounds out to Greinke, Yan Gomes flies out and Victor Robles flies out to deep center as Greinke notches another 1-2-3 inning.

Yuli Gurriel hits a lead off home run and Yordan Alvarez and Carlos Correa reach base on back to back singles. Robinson Chirinos pops out on a bunt for the first out and Josh Reddick grounds out to first, advancing the runners, but Juan Soto makes a diving catch on a George Springer deep fly ball to bring the inning to an end.

Juan Soto notches a lead off single, but Howie Kendrick grounds out into a double play to Greinke. Asdrubal Cabrera then grounds out to first to end the inning.

Max Scherzer forces a George Springer fly out and Jose Altuve to ground out before walking Michael Brantley. Alex Bregman flies out to right field to end the inning.

RELATED: Here's how much money the World Series teams could each take home