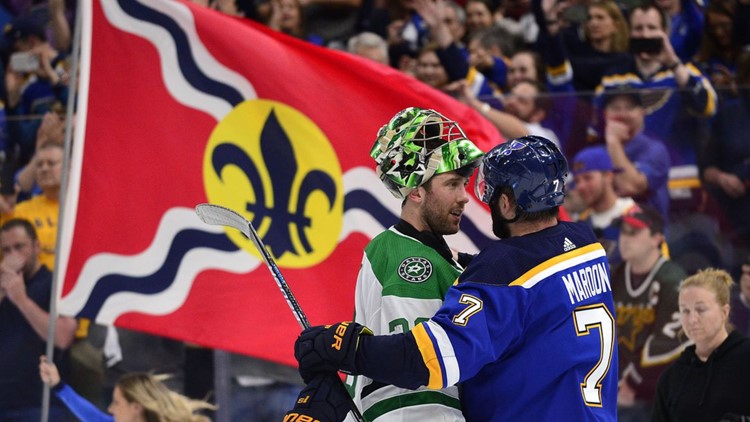 When people say a picture is worth a thousand words, I often think of it as a far-fetched concept. However, when it comes to local freelance photographer Jeff Curry, the concept feels more realistic.

Curry took the instantly iconic picture of Pat Maroon and Ben Bishop after Game 7 of the St. Louis Blues and Dallas Stars ended in double overtime. The two guys who were at the forefront of the play that decided the fate of the series shook hands at mid-ice, and Curry took a picture. But it wasn't just a shot of the two St. Louis native players; Curry caught a flag with the St. Louis logo waving in the background.

Photographers search for this kind of image for their entire careers, but for Curry, it was simply the latest in a series of sporting event adventures with just a lens and a hand deciding what we see and don't see. Sports photographers represent the historical backbone of games for later generations to soak in. Without them, according to some, it just didn't happen.

In order to get more of a feel for his profession and how he got into it, I engaged Curry in a Q&A. Check it out and learn a little about the guy who fills the history books with photos.

Buffa: At this moment, your picture of Pat Maroon and Ben Bishop after the Western Conference Semifinals is hanging in offices across Missouri and is one of the most sought after images right now in the world of sports. How does that make you feel?

Curry: When I first looked at that image after the game all I could think was St. Louis will enjoy this image. I went to sleep in the early morning hours and didn’t think it would blow up the way it did. It’s a great feeling. The hand shakes can be hard to shoot. There are so many people on the ice. I got blocked on a lot of the pictures, but just as the flag was coming by it seemed like the sea parted and I finally had a clean shot.

Buffa: When did you know sports photography was your calling and something you had to do?

Curry: In high school I used to photograph my friends rollerblading and skateboarding. I fell in love with photographing action and freezing a moment in time. I was lucky enough to meet Scott Rovak in college and he helped me get into the industry. I wouldn’t be here without him and many other talented photographers in St. Louis who have helped me out over the years.

Buffa: What's the most memorable game, outside of that Blues-Dallas double overtime finale, that you have snapped pictures at?

Curry: Game 6 of the Cardinals 2011 WS. Game 6 felt just like the blues double overtime game. You could feel the excitement building. Even when things weren’t looking good you just had a feeling it was going to go their way. I was lucky enough to be there and see it all through my lens.

Buffa: When you are driving around town, do you see something and feel the urge to snap a shot? As a writer, I get the urge to put EVERYTHING into words. Do you have that 24/7/365 affliction as a photographer?

Curry: Oh yeah! I can’t really turn it off. If I’m not looking for a picture I’m probably thinking about different angles or ideas for pictures.

Buffa: How many pictures on average do you take during a game assignment?

Curry: It all depends on how good the game is and if things happen in front of you. My average is 600  total frames shot but after you edit though your take it is probably 20-40 photos send on deadline.

Buffa: What are your goals each time you set up a shot or get into a game? What do you want the fan to find out or take away with your imagery?

Buffa: Last, but not least, what does a hard-working photographer drink? Favorite brewery or bar in town to get a pint or sip at?

Curry: I enjoy a good beer every now and again. 4Hands, Schafly, and Busch. Favorite bars are The Royale, Hideaway, SOHA and Gramophone. If you have a good beer selection, I’m in.

It's easy to take sports photographers for granted. Like the reporters who dish us interviews and updates, people think their everyday practice and execution comes easy. They forget that every artist is trying to find new and invigorating ways to set themselves apart from the rest. They may not say it out loud, but the need to be unique and authentic with each image is a living, breathing thing.

Curry takes hundreds of images a night, but with one image after a hockey game, his work went viral and became a beacon of pride for the city of St. Louis. Shortly after Maroon put a puck past Bishop to win the series, they were there embracing. Near them lied Curry, setting up to take a picture that future generations of Blues fans will ask their parents about. A St. Louis guy taking a picture of two St. Louis guys.

One of the greatest things about sports is they endure no matter what. The same can be said about certain photographs. They tell a story, adding reverence to the notion that unless there is an image attached, something may not have happened. In more ways than one, photographers preserve the memory of our world. Curry owns a small piece of that universe.