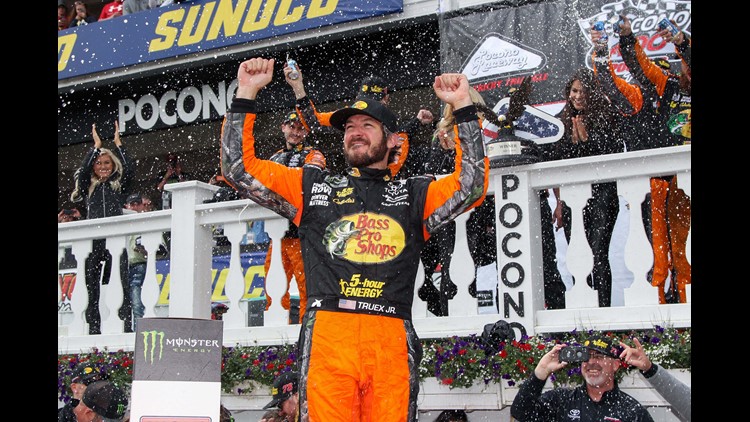 Truex held off championship favorites Kyle Busch and Kevin Harvick down the stretch and won for the second time this season.

Busch and Harvick had combined to win nine races already this season and each driver spent time in front and battled for the lead over the final laps. But this one belonged to Truex, the defending Cup series champion, in the No. 78 Toyota, and he took the checkered after two straight runner-up finishes.

Kevin Harvick has won the second stage of the NASCAR race at Pocono.

Harvick and Busch have combined to win nine races this season. Harvick is going for this sixth victory.

Martin Truex Jr. has won the first stage of the NASCAR race at Pocono.

Kevin Harvick and Kyle Busch, who have won nine of 13 races this season, were second and third.

Ryan Blaney is starting from the pole at Pocono Raceway, the site of his lone NASCAR Cup victory.

Blaney won the June 2017 race driving for Wood Brothers Racing. He drives the No. 12 Ford this season for team owner Roger Penske.

Kevin Harvick and Kyle Busch have combined to win nine of 13 races this season. Harvick joins Blaney on the front row and Busch starts fifth. Busch has been strong this weekend. He topped both practice charts and won the Xfinity Series race on Saturday. Busch is the series points leader.