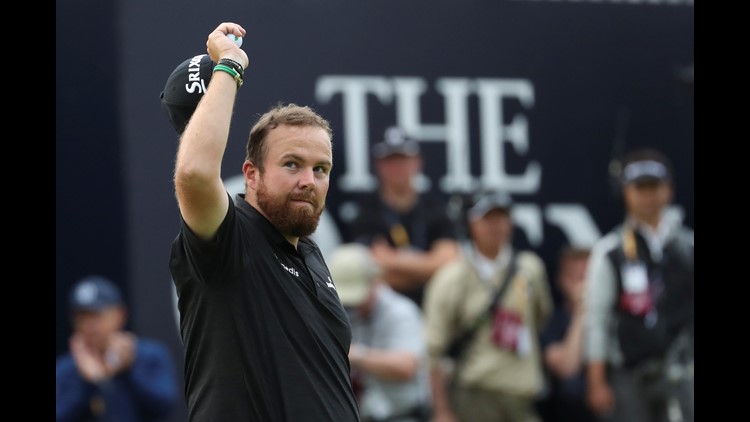 Photo by: AP
Ireland's Shane Lowry reacts to the crowd on the 18th green during the third round of the British Open Golf Championships at Royal Portrush in Northern Ireland, Saturday, July 20, 2019.(AP Photo/Jon Super)

Lowry fires 8 under 63 to take command of Open Championship

PORTRUSH, Northern Ireland — Shane Lowry set a pair of records while taking a commanding four-stroke lead through three rounds of the British Open at Royal Portrush.

Lowry topped the Dunluce Course record with an 8-under 63 that included three straight birdies late in the round. The Irishman broke out of a four-way tie with a birdie on No. 9 and continued to distance himself from the contenders.

Lowry's 16-under 197 is the lowest 54-hole score in British Open history as he seeks his first major championship. He had a four-stroke advantage through three rounds of the 2016 U.S. Open at Oakmont, only to watch Dustin Johnson rally to win.

Britain’s Tommy Fleetwood is alone in second following a 66 that allowed him to pass second-round co-leader J.B. Holmes. The Kentucky native shot a 2-under 69 for a 10 under total, one ahead of Brooks Koepka (KEHP’-kuh) and Justin Rose.

The tee times for the final round have been moved up one hour due to rain and strong wind in the forecast.