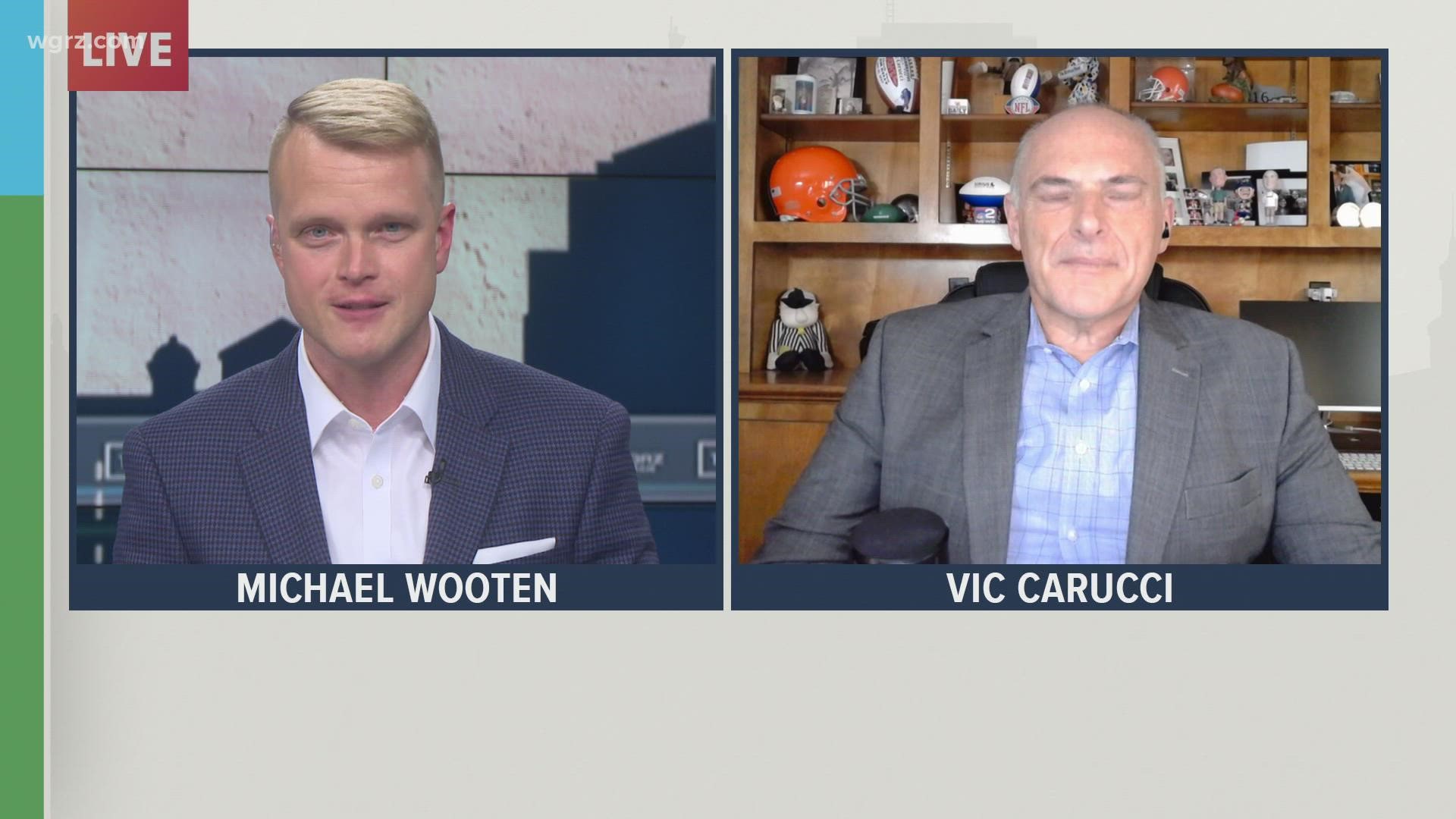 “I think you learn more in losses than you do in wins,” he said Wednesday, referring to the Buffalo Bills’ 23-16 season-opening loss against the Pittsburgh Steelers.

There were plenty of lessons from that game.

Here’s some of what Allen and his teammates took, or at least should have taken, from what happened before a mostly stunned crowd at Highmark Stadium that can be applied to Sunday’s AFC East clash with the Miami Dolphins at Hard Rock Stadium:

Don’t be stubborn when it comes to your game plan.

The Bills were fully expecting the Steelers’ defense to use the blitz-happy approach that has long been its signature. They were mistaken. The Steelers relied mostly on three and four-man fronts to generate pressure and stuff the run. The strategy, along with superb execution from highly talented players, worked exceptionally well against the NFL’s second-ranked offense in scoring and total yards, and third-ranked passing attack in 2020.

The Bills insisted on using spread formations, with four and five-receiver sets, with the intention of minimizing the effectiveness of the anticipated blitzing. They spread out the Steelers’ defense so would-be blitzers from the outside would be forced to cover receivers.

The Steelers welcomed the Bills’ spread formations, because their defensive front consistently won its battles at the line of scrimmage – which had plenty to do with the Buffalo O-line being called for six holding penalties – while its defensive backs plastered themselves to the receivers. The result was a combination of Allen often being forced to move away from pressure while also holding the ball as he struggled to find open targets.

All of a sudden, Stefon Diggs, who pretty much looked uncoverable last year, seemed ordinary.

The Dolphins undoubtedly took note of the Steelers’ defensive game plan. Can they duplicate it? Maybe, though it’s more likely they’ll stick to what they do best, which involves a fair amount of blitzing and a great deal of disguising of fronts and coverages. Brian Flores, the Dolphins’ coach, is a former New England defensive assistant. He pretty much sticks to the philosophy he absorbed from Patriots coach Bill Belichick.

This time, take the ball away.

The Bills’ defense flirted with getting turnovers against the Steelers. Against the Dolphins, they should have even more chances.

They need to capitalize on them.

Ben Roethlisberger mainly played within his 39-year-old self last Sunday. He generally steered clear of forcing throws, choosing instead to take whatever the Bills were willing to give him. He didn’t challenge Buffalo’s secondary with the long ball, looking like a quarterback who knows his limitations after a severely damaged throwing elbow caused him to miss most of the 2019 season.

Tua Tagovailoa, the Dolphins’ quarterback, is prone to making some risky passes. He might be even more willing to take chances against the Bills after sharing this bit of advice he recently received from Miami Hall of Fame quarterback and mentor Dan Marino: “Pick a guy and let it fly.”

The Bills will have something to say about whether there are all that many guys for Tagovailoa to pick. They did a solid job against the Steelers before unraveling a bit in the second half as the offense’s struggles increased. Tight coverage, along with some steady pressure, will go a long way toward helping to force Tagovailoa into mistakes.

Allowing a blocked punt that the Steelers returned for a touchdown is unacceptable.

Problem one was faulty protection. Problem two was Matt Haack’s three-step punting style, which, by itself, doesn’t necessarily make him overly susceptible to having his kicks blocked. However, that extra step can become an issue when protection breaks down.

Some of it could come from personnel changes. But most figures to result from changes in the offensive approach.

Brian Daboll is generally correct in saying that all that matters in calling plays is whether they contribute to a victory – that, in some games, it could be a large number of passes and in others, it could be far more runs.

Nevertheless, the Bills’ offensive coordinator didn’t do his blockers any favors with the pass-heavy scheme (51 attempts) he employed against the Steelers.

First, Buffalo’s O-line isn’t nearly as good at holding up in protection as its quarterback is at making plays in or out of the pocket. Second, running the ball more than the 25 times (including nine by Allen) the Bills ran it against Pittsburgh would have done more to help Allen settle down from the “nerves” he acknowledged having and allowed the linemen to establish some sort of rhythm, while also cutting down on the holding penalties.

Allen also said there were ways in the passing game the Bills could give the line more assistance.

“Taking completions early and then trying to sustain drives and maybe working bottom up instead of top down in some of our concepts, forcing their defense to stay on the field a little longer,” he said. “The longer they stay out there, the more tired they get, the less pass rush becomes a problem.”

Dawson Knox might be a decent answer at tight end (and perhaps even better than that) after all.

Sometimes it takes multiple seasons for players to fulfill their potential, or at least move closer to that point. We could be seeing that with Knox, who joined the Bills in 2019 as a third-round draft pick.

He spent the offseason hearing that the Bills needed a significant upgrade at his position. There was a daily (if not hourly) watch for when they would pull the trigger on a trade to acquire Zach Ertz from the Philadelphia Eagles. That never happened.

What happened, at least in one game and against a solid defense, was Knox showing he can give the Bills sufficient production. He caught all four of the passes thrown in his direction for 41 yards and generated three first downs.

The Dolphins struggled to cover the Patriots’ tight ends last week. Look for Knox to have an impact Sunday.

The alarm couldn’t have been much louder. The Pittsburgh game made it clear that all of those visions of a run to the Super Bowl are exactly that: visions.

The offseason/preseason hype surrounding the Bills might, in fact, be warranted. But it has much more to do with expectations that what the team showed in 2020 will again be present this year. That isn’t how it works in the NFL, even for the teams that consistently remain in the upper echelon.

Each season and each game are a separate entity. There must be continual improvement and evolution. That’s the reality. As we have already seen, there’s no guarantee the offensive dominance the Bills displayed last season will continue in every game. Opposing defensive coordinators have had plenty of time to thoroughly study the Bills’ 2020 offense and come up with ways to stop it or at least slow it down.

Allen believes the season-opening loss could, at least in that regard, prove beneficial.

“To have it early on, especially, just kind of reset our focus and forced us to kind of focus on some things that we need to work on that, if we would have won that game somehow, maybe we wouldn’t be working on things we’re working on right now,” he said.