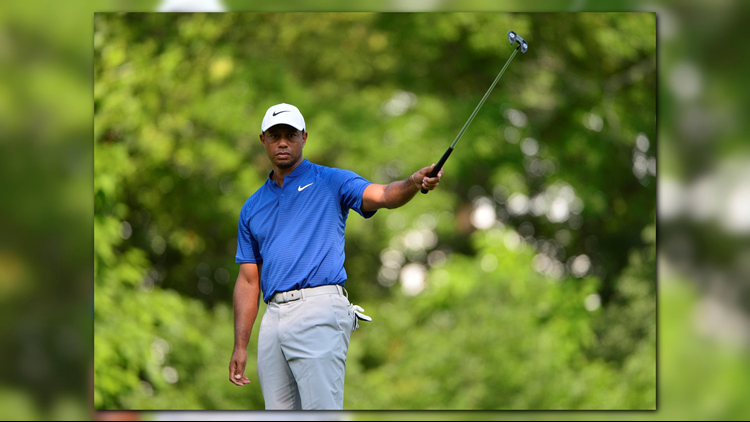 ST. LOUIS — Even from halfway across the course, the roar told the story. The buzz was building, one club twirl and fist pump at a time.

“Kind of reminded me of being in the vortex a lot of years ago,” Stewart Cink said.

Birdies on the first hole, the second. Then at the sixth. Then at the eighth. How low would he go? The chatter swelled. The anticipation rose. Tiger Woods was doing it, doing it again, revving the 100th PGA Championship into a frenzy, shooting up the leaderboard and, for the second consecutive major championship, giving himself an opportunity a year ago he would’ve never thought possible. That is: a chance at major No. 15.

It was The Tiger Effect in full — mammoth galleries, booming roars, the greatest of his generation reaching back and delivering yet another sizzling Saturday.

“Fun,” he called it afterwards, smiling.

For stretches Saturday, it felt like Woods made the other golfers disappear. Some fans at Bellerive Country Club planted their feet a shade after 6 a.m., refusing to move for the better part of 12 hours – just for a glimpse at Woods. Some climbed trees. Some stood on wobbly chairs. Some baked in the sweltering Midwest heat for hours on end.

Why? Because Tiger was in contention. And because they wanted to see it.

“It was awesome,” added Cink, who played with Woods, and who also shot a 66. But no one could’ve told you that. “Like turning back the hands of a clock.”

After Woods missed his birdie attempt on the 14th green, one fan muttered to another, “Well, let’s just go home.”

No matter there were still seven groups yet to play the hole.

All told Woods played 29 holes Saturday, including 11 from his rained-out second round. It showed late. The fatigue crept in, Woods admitted. His 31 on the front gave way to a 35 on the back, and not because Tiger didn’t give himself chances.

He missed six straight birdie putts at one point, then blew his best chance on No. 17, when he ripped an eagle putt four feet past the hole and pulled the comebacker. His 66 has him at 8 under through three rounds, four shots behind leader Brooks Koepka.

Following Woods, of course, was a sea of smartphones, legions of hungry golf fans anxious for a peek. The crowds at Bellerive were some of the biggest on tour this year, even for Woods. At one point, he got a thunderous ovation just for walking up to his ball in the fairway. Seriously.

“They have been unbelievable, not only supportive, but just so positive,” Woods said. “They have been supportive of all my playing partners and myself these first three rounds, and it’s been a pleasure to play in front of them, it really has.”

Can you blame them? It’s the first time Woods has ever competed in St. Louis as a professional. The last time the tour came to town, for the 2008 BMW Championship, Woods was injured. Before that, the 2011 WGC American Express Championship was cancelled days after the 9-11 terrorist attacks. Woods found out during a practice round out on the course, then drove 13 hours home to Orlando.

“We’re coming to a place that hasn’t seen this kind of golf tournament in quite a while, and the last that was here had no Tiger Woods,” Cink said. “No surprise the fans here are really turning out. The crowds have been huge, even the rainy days. I just feel like it’s been really good to have Tiger back, because I got to see it first-hand today.”

It was stunning, even to Thomas, how deep the galleries were.

“I don’t think I’ve ever played in front of that many people,” Thomas said Saturday morning. “The first real Tiger effect, I guess you could say. I’ve played with him a handful of times in tournaments, but haven’t exactly had crowds like this, so it’s pretty incredible.”

The fans were begging for more red numbers on the back nine, but the putter went cold. Woods still left smiling. Exhausted, but smiling. His back-to-back 66s are just the third time he’s done that in his gilded major championship career. Each of the other two ended with a trophy.

“It’s soft, it's gettable,” Woods said of Bellerive. “You can't just go out there and make a bunch of pars, you're going to have to make some birdies.”

He knows what it’ll take to make them roar in Round 4. And maybe he knows he’s got enough.

As loud as Saturday was, imagine if he does it tomorrow in his Sunday red.