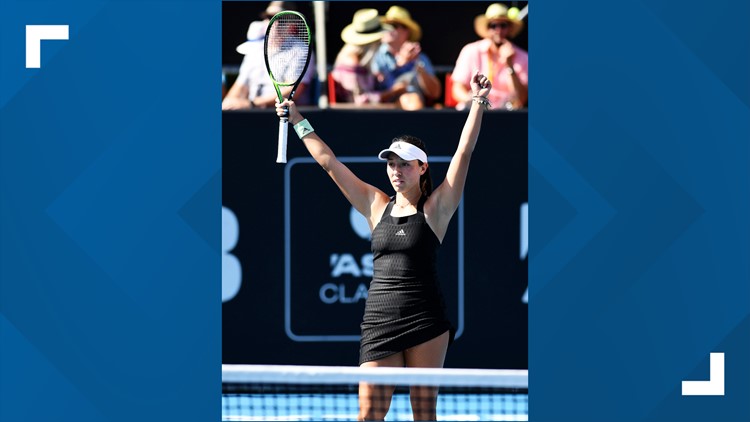 Photo by: AP
Jessica Pegula of the U.S., celebrates her semifinal win over Denmark's Caroline Wozniacki at the ASB Classic in Auckland, New Zealand. Saturday Jan. 11, 2020.( Andrew Cornaga/Photosport via AP)

AUCKLAND, New Zealand — Jessica Pegula upset former world No. 1 Caroline Wozniacki on Saturday to set up a final at the ASB Classic against top-seeded Serena Williams.

The daughter of Buffalo Bills owners Terry and Kim Pegula came from a set down to beat formerly top-ranked Wozniacki 3-6, 6-4, 6-0 in Wozniacki’s penultimate tournament before retirement.

The crowd at the Auckland Tennis Center had barely recovered from the shock of Pegula’s victory when Williams joined her in Sunday’s final. Williams took only 45 minutes to overwhelm third-seeded American Amanda Anisimova 6-1, 6-1.

Anisimova wasn’t born when Williams won the first of her 23 Grand Slam titles and had dreamed of one-day playing Williams. But she met Williams in her most dominant form.

“I was definitely in the zone today,” Williams said. “It was just one of those days.

“I knew I was playing a really, really great player and an even better person so I knew I had to come out serious.

“It feels good. I’ve been working really hard for a couple of years — my daughter’s only two — and I seem to be really hard on myself. But considering everything it’s really good.”

Anisimova, who lifted her ranking from 99 to 24 in 2019 and ousted Eugenie Bouchard on her way to the semifinal, had no answer for Williams’ power Saturday. She was broken in her opening service game and again in the third and seventh games of the first set.

Williams broke in the second and fourth games of the second set to lead 4-0.

The match contrasted sharply with the clash between Wozniacki and Pegula which lasted almost two hours.

Pegula broke Wozniacki’s serve in the first game of the match, immediately dropped her own and was broken again in the sixth game and Wozniacki went a set up after only 43 minutes.

But Pegula stepped up in the second set and played more aggressively than Wozniacki, controlling the match from the baseline. She was able to move Wozniacki around the court and to change pace of her ground strokes, particularly to lift the pace of her cross-court forehand. Wozniacki was more defensive and struggled to match the 25-year-old American.

Pegula broke Wozniacki’s serve in the second game of the second set, gave up a break at 2-2 but broke again in the 10th game to take the set.

She was dominant in the third set, breaking Wozniacki in the second, fourth and sixth games to surge into her third WTA final.

“Caroline has had an amazing career and I know she’s retiring so I had to work really hard but I’m just happy to get the win and I’m pleased to be in the final,” Pegula said. “I definitely knew if I was going to play defensive I wasn’t going to win that battle because she’s the best in the world at that.

“So I knew I just had to step in and take my chances and just trust my game.”

Wozniacki remains in contention for a title in Auckland. She and Williams will combine Sunday in the doubles final.